Who knew a road game against Robert Griffin III would provide warm fuzzies for Kansas City Chiefs fans this year? Just a year ago this looked like a tough match-up against the Washington Redskins, but it was the spark the Chiefs needed to get back on track with a 45-10 victory over the Redskins. Let's go by the numbers for this week.

The Kansas City Chiefs record through 13 games. The Chiefs' place in the standings might be common knowledge, but it's important to remember just how far the team has come. From two wins to double digit victories is a historic turnaround, and Chiefs fans will likely remember this as a favorite season for the ages. From special teams dominance to the elite impact of Jamaal Charles to a complete defense, the Chiefs have truly turned things around. A lot of that is due to...

The number of career victories for Andy Reid, who crossed the 150 win mark on Sunday against the Skins, a category with only 20 other members in NFL history. He's had his detractors, but NFL history will remember Reid as one of the better ones to ever come along.

The Chiefs scored in the first half against the Redskins as many points as they had in any other game this season.

The number of first half points by the Chiefs. The Chiefs scored in the first half against the Redskins as many points as they had in any other game this season. In fact, it was the second highest total in franchise history, just behind the 42 points they scored against the Broncos -- in 1967! The offense has come alive in recent weeks, but this week's first half was a dominant effort in every facet of the game.

The number of return yards for Dexter McCluster and Quintin Demps. When a team's kick and punt returner combine to go the length of the field three times, you know you've had a good game. Chiefs special teams coach Dave Toub deserves a raise for the incredible special teams play on Sunday. DMC averaged 25 yards per return and had 177 total yards including a touchdown (and another near-TD), good enough for the highest single-game total in franchise history. Demps added an awesome 95-yard return and 123 total return yards. See links to videos of all their returns here. 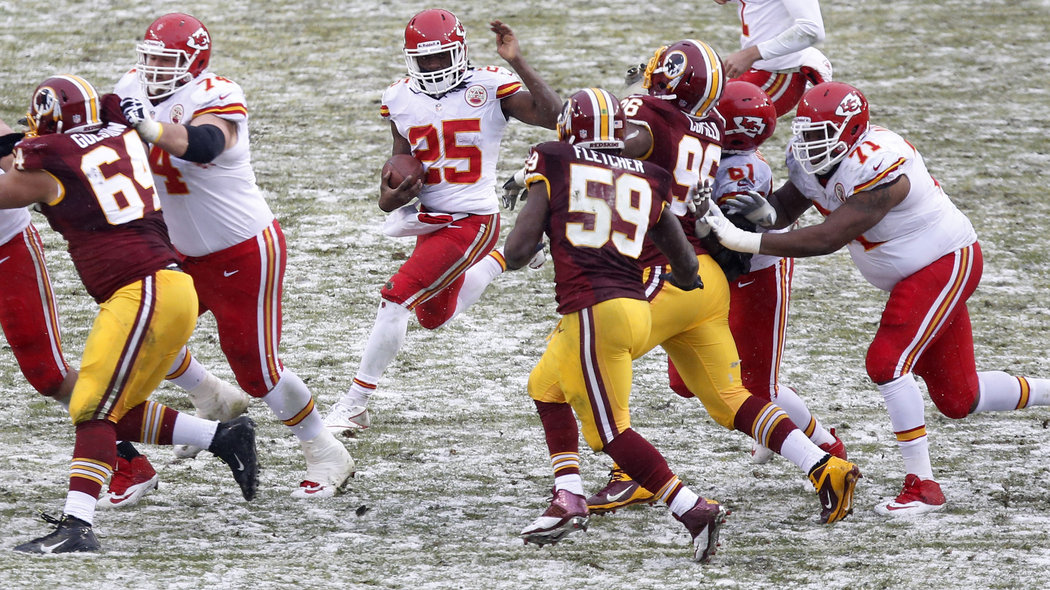 The easiest one is beating Oakland.

The number of career points scored for Ryan Succop. Two players remain from KC's 2009 NFL Draft class. Tyson Jackson, the third overall selection, and Succop, the team's seventh round choice. Succop hasn't missed a game through his first five seasons, has never missed an extra point and has made 82.4 percent of his field goal attempts in his career. He passed Priest Holmes for third place on the Chiefs all-time points list on Sunday. Up next? Jan Stenerud at No. 2. It might take a awhile, however, since Stenerud has 1,231 career points.

The number of sacks by the Chiefs. The Chiefs' pass rush had been non-existent in the last five weeks after setting league-leading marks in the season's first half. They returned on Sunday. Tamba Hali had two sacks to bring his season total to 11. Tyson Jackson had two as well. Eric Berry and Frank Zombo accounted for the others, but the team also had seven tackles for loss. It was a dominant effort and it felt good to have the Chiefs defense back on track, even without Justin Houston.

The number of total touchdowns scored by the Chiefs this season. The Chiefs are tied for fourth overall in the NFL, behind the Broncos, Lions and Bengals. That's 18 passing TDs, 12 rushing TDs, four from returns and six defensive scores. The Chiefs can put points up on any given play and they'll do it alongside the best teams in the league. It's the sort of opportunistic team like this that can make noise in January.