Chiefs vs. Redskins weather could get interesting

The Washington Redskins are hosting the Kansas City Chiefs and things are going to be cold out there. Find your weather report here, which says snow could be coming.

Share All sharing options for: Chiefs vs. Redskins weather could get interesting

My brother and co-editor of the site Chris Thorman (@christhorman) will be heading to today's Chiefs-Redskins game and, boy, did he pick a cold one or what. Temperatures will be hovering around freezing for much of the game while some snow is expected, according to Weather.com.

Earlier this week we looked at the possible inclement weather and not much has changed. It's still cold as hell and snow is still expected. 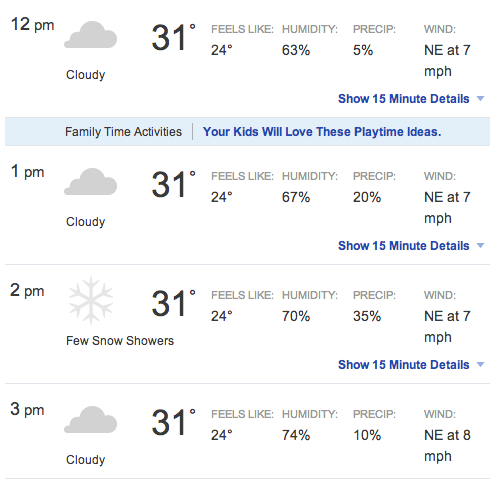 This picture came a little after 8 a.m. (Arrowhead Time):

Decent snow at FedEx Field for #Redskins vs Chiefs. Workers salting sidewalks for fans ahead of forecasted ice. @WNEW pic.twitter.com/u45uxtVl6D

The last time we looked at the weather we also asked you who a snow game would help the most -- the Chiefs, Redskins or neither / both. The answer to that question, according to Arrowhead Pride readers...

I think it could help the Chiefs because the snow would take away the threat of one thing that has dominated the Chiefs all year -- the deep ball. The big play. Hard to throw deep when the ball is frozen. I suppose I'll take the Chiefs on that question, too.