Do you enjoy meaningless football? Do you enjoy having bragging rights about our epic players? Yes? Keep reading.

The Pro Bowl might be the worst exhibition of football ever witnessed. Yet, it does a better rating than almost any sporting event in this country outside of other football games.

With that said, it is still always satisfying to see players from your favorite team getting voted into the game. It's a validation your organization has talent and should have a nice talent base going forward.

So, let's take a look at the current balloting totals to see where some high-profile Chiefs sit:

*These are all fan votes thus far, which count for 1/3 of the vote. The other 2/3 comes from players and coaches respectively, who vote December 23-26.*

Out of every player in the NFL, Charles is sitting fourth in the voting behind only Peyton Manning, Drew Brees and Marshawn Lynch. Barring any kind of injury, Charles is an absolute lock to be in Hawaii.

Albert is currently in line for his first-ever Pro Bowl. The left tackle who almost ended up with the Miami Dolphins this offseason is having a terrific campaign. He is the leading vote-getter at either tackle spot in the NFL.

This one is somewhat of a stunner. Not to say Allen is not a good player because he is, but Allen is far from a well-known name. Good for him however if he can pull off a Pro Bowl trip.

As we all know, Poe is having a breakout season and making a claim as the best interior defensive lineman in the game today. Poe leads all DT/NT's in votes.

Hali is looking to make his third consecutive Pro Bowl. The former Nittany Lion is carving out a great career, and is once again showing himself to be one of the most feared pass-rushers in the league. He leads the voting for all outside linebackers.

Honestly, Berry could get voted in at safety or linebacker. The guy is a full-blown animal, so this is predictable. In three years of being healthy, he will be making a trip to Honolulu each time. That's the stuff of Hall of Famers.

No explanation needed. Colquitt almost has double the votes of Andy Lee, who comes in second for punters. Epic.

Leading vote-getters at each position: 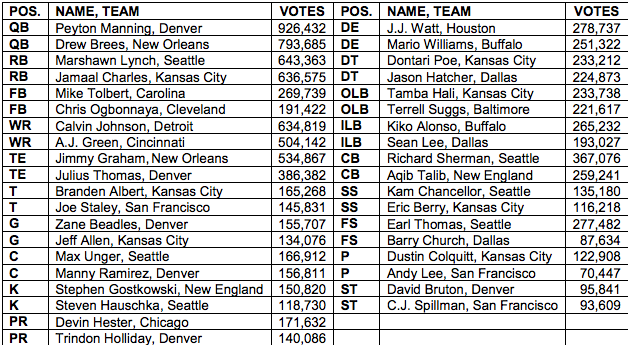