Chiefs vs. Chargers: The best and the worst

Share All sharing options for: Chiefs vs. Chargers: The best and the worst

Well, that was something.

I HAD planned on writing today's article as a pseudo-preview for the Chiefs' upcoming playoff game, given that KC had dropped to a 15-point underdog after the starting lineups were announced. But then something strange happened.

Actually, there is some beauty to behold in the loss. Remember how Todd Haley purposely lost games for this franchise in order to win some sort of pissing match with Scott Pioli?

Well, some would describe this as a great case of (the last decade's most overused word): Karma.

Personally, I'd rather believe that Lamar Hunt is somewhere up above us, dangling the outcomes of football games like strings on a puppet, having a good chuckle right about now.

Best effort of the season - The 30 or so young bucks, who remain mostly anonymous to the casual fan, strapping it up for this meaningless exhibition of football and taking it to the Chargers, who had Errrrrrr'thang to play for in their biggest game of the season. It showed me this team has a certain kind of toughness. It gave me great confidence heading into these playoffs. I was proud. Hell, these men inspired me. I mean really...

Big Red: 'It's the start of a new season'

Chiefs coach Andy Reid welcomed his team to the playoffs.

Chiefs are 2.5-point 'dogs in Indy

Yo, DJ Larry Johnson, you know what to play!

A scrub is guy who runs a fly

No longer known as McCluster!

But just sits on the bench-ass

No, these ain't no scrubs.

A scrub is a guy who can't get no playing time

Hoping Dirkness will write about me!

Best case scenario (for 59:52 anyways) - Everything was going to perfection. The primary strategies of both the Play Everybody and Sit Everybody crowds would've been satisfied. They came away injury free (aside form a strange Sean Smith cameo + injury, who's been better than people want to give him credit for this season) AND they built some positive momentum heading into the playoffs (a theory that I kinda sorta shot down last week). And honestly, I would argue that the positive momentum from that game still exists. The score may have said otherwise, but the 53 guys in the Chiefs locker room know who really won that game.

Best question that I have no business answering - Are NFL starters so worn down by season's end that a group of rag-tag rookies and backups, albeit ones who are fresh, can compete with a playoff team? The answer is a positive one for KC either way. They either have incredible depth. Or starters really do get that banged up, and the Chiefs will have an edge come Saturday given their time off this week.

Best time to get screwed - In a game that doesn't tangibly matter. And there's no debating it, the Chiefs most definitely got screwed yesterday. But the main reason I wanted to win was because the game was so important for San Diego, and I wanted the ability to hang it over their heads for years to come. Chiefs fans would have OWNED Chargers fans (you know, if such a thing existed). Although, I'd almost argue the stench of these obviously blown calls might linger even longer than a victory would have.

Worst time to get screwed - Next week. If something like we saw yesterday were to happen to this team on Saturday, then I'm gonna....well, I'm gonna...send some REAL nasty tweets to @nflcommish! And then drink.

There should have been a penalty on Ryan Succop's field goal attempt.

They were cheering for the Chiefs until the end.

Best recognition - Andy Reid claims he called timeout before the Chargers kneeled down to end regulation because he noticed the illegal formation on Succop's missed field goal and wanted to give the refs a chance to review it (I don't think it's reviewable, but at that point, worth the try). That's incredible. This is the Andy Reid who's supposed to be clueless on challenges right? Now he's 7-of-8 on the season, and noticing minute details like this? Maybe there's hope he runs the ball 40 times next week after all.

Best backup on the field - Ron Parker. So what if he can't hang with Jalil Brown as a gunner (the G.O.A.T.), he's a much better CB. But Parker wasn't the only scrub to catch my eye yesterday. Here's my most impressive Top 10:

2. Mike Catapano, DE (deserves some snaps with the ones)

4. Kniles Dave, RB (held on to the ball, earned himself some playoff carries)

5. A.J. Jenkins, WR (soaring above and beyond Johnny Baldwin)

7. Husain Abdullah, S (should be playing over a Player to be Named in a minute)

9. Jay-E Howard, DT (the whole D-Line got great push up the interior) 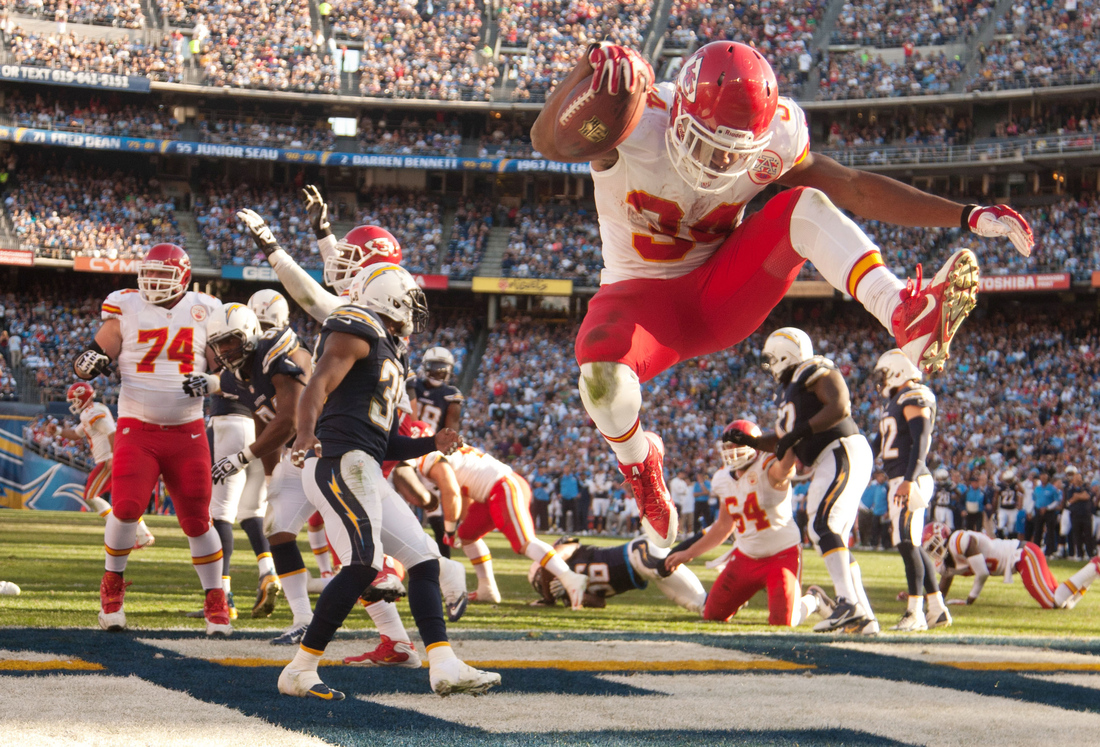 Best backup I didn't name - Chase Daniel. Because he deserves his own paragraph! The Downfield Pumpfake King of the NFL looked great yesterday, which felt vindictive for me because I've been singing his praises since he left Mizzou (not an MU fan). The crazy part was how he showcased both a higher ceiling, and a lower floor, than Alex Smith all in his first two throws of the game! (a near pick-6, immediately followed by a 48-yard laser beam to Jenky)

Worst backup on the field - Kendrick Lewis. I kept wanting to see him benched yesterday, but at the same time, with all the backups on the field, I didn't know if that was kind of like a promotion. He's been so bad lately. It might be too late, but I really don't want to see him on the field next week.

Best patience - No, it wasn't Kniles Dave's sneaky good, almost Priest-like, patience around the corner on a first half sweep. This award goes to Jamaal Charles, who hovered oh, so close to nostril penetration for the whole world to see yesterday. And yes, Chase Daniel was a tad disappointed.

Worst play call known to man - Plays designed to go wide to the short side of the field. Just yesterday, the Chiefs ran the following plays all to the short side of the field: A reverse with Jenkins (1 yard), a designed swing pass that Knile didn't even bother catching (smart move), and on the final drive of overtime, when Clutch Daniel had them zinging down the field, a 1st and 10 toss sweep that lost five yards. Three plays later, game over. It's almost like none of these coaches have ever played Madden before.

It's almost like none of these coaches have ever played Madden before.

Best reason to hate the Colts - Well, besides them being the Chiefs' nemesis and all, eliminating them from the playoffs in 1995, 2003, and 2006. They're basically cheaters in my eyes. They had Peyton Manning for 13 seasons, then have one bad year, and then immediately get Andrew Luck for the next 15 seasons. Cheaters. I hate it. Those fans don't deserve it. We do. Guide us, Lamar!

Best reason for hope - Andy Reid. Given the Chiefs and Colts played two weeks ago, I think coaching plays a bigger role than usual next Saturday. Who can make the proper adjustments? Reid has his struggles on gameday, but I trust his week-long preparations leading up to a game as much as any coach in the NFL. And don't forget, he's still 14-2 coming off a bye week, which the Chiefs essentially just experienced.

If you shave this week then you're doing it wrong,