The NFL admitted that there should have been a penalty on the Chargers when Ryan Succop missed the potential game winning field goal on Sunday.

Share All sharing options for: NFL admits Chargers should have been penalized on Ryan Succop's field goal attempt

As everyone knows by now, the referees in Sunday's Chiefs-Chargers game blew a call. Actually, they blew two key calls. But let's just focus on one of them -- Ryan Succop's missed field goal.

According to NFL rules, the Chargers had too many players lined up on the right side of the line of scrimmage during Succop's game winning field goal attempt, which he missed. 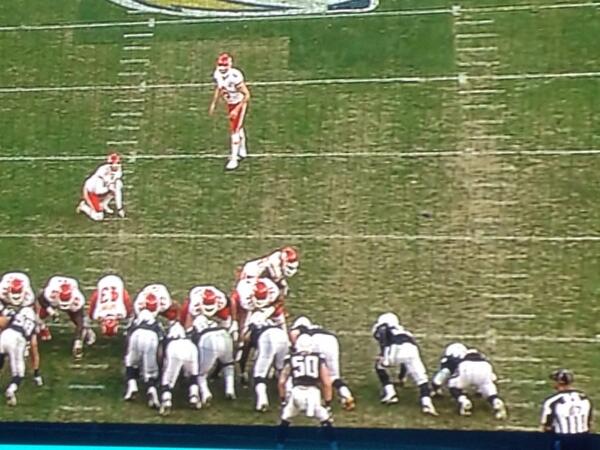 The field goal attempt should not have counted. It should have been a penalty and Ryan Succop should've been given another opportunity to kick the field goal from five yards closer.

But that didn't happen. The refs missed the call.

And today, the NFL admitted their error.

NFL says on the #Chiefs missed FG, Chargers lined up 7 men on 1 side of the snapper. "This should’ve been penalized as an illegal formation"

What a horrible mistake. If Succop had made that field goal, the Chiefs would have won the game and the Steelers, not the Chargers, would have clinched the sixth and final AFC playoff spot.

The Chiefs were locked into the No. 5 seed no matter what so this technically didn't affect them. But the call was flat-out wrong and it may have cost the Steelers a playoff spot.

With 0:08 remaining in the fourth quarter of Sunday's game between the Kansas City Chiefs and San Diego Chargers, Kansas City faced a fourth-and-12 from the San Diego 23. The Chiefs attempted a 41-yard field that was no good.

On the play, San Diego lined up with seven men on one side of the snapper. This should have been penalized as an illegal formation by the defense.

Rule 9, Section 1, Article 3 (b) (1) of the NFL Rule Book (page 51) states that "No more than six Team B players may be on the line of scrimmage on either side of the snapper at the snap."

The penalty for illegal formation by the defense is a loss of five yards. This is not subject to instant replay review. Had the penalty been assessed, it would have resulted in a fourth-and-seven from the San Diego 18 with 0:04 remaining, enabling the Chiefs to attempt a 36-yard field goal.

Read about the OTHER blown call right here.