The Chiefs inactives are a bunch of Pro Bowlers

Share All sharing options for: The Chiefs inactives are a bunch of Pro Bowlers

The Kansas City Chiefs are not going to be playing many starters. The inactives for the game against the San Diego Chargers are out and the Chiefs have a Pro Bowl-worthy list of players not dressing today:

If you're counting, those are all starters and half of them were just selected for the Pro Bowl. Another one, DJ, should've been selected. In the seven years we've been covering the Chiefs, this is the most talented inactive list I have ever seen.

Because of this, we won't blame you if you decide to do something else this afternoon during the game. 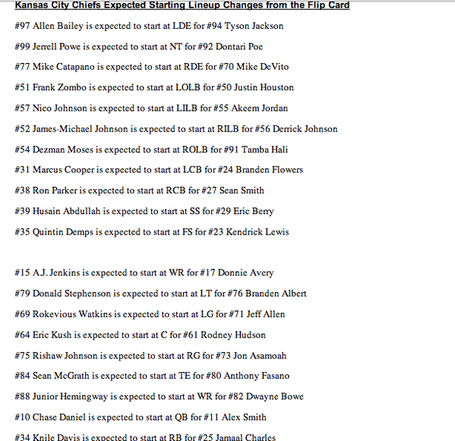 Well, Eric Fisher will start today. So will Anthony Sherman. So there’s that. #Chiefs

The reason the Chiefs are sitting all these guys, if you didn't know, is because they are locked into the No. 5 seed in the playoffs. They can't move up or down. So this game is meaningless for them. But it's very meaningful for other teams like the Chargers and Steelers whose playoff hopes rest on the Chiefs.

And for the Chargers inactives...