LeBron James was spotted wearing a No. 6 Chiefs jersey last week. Herbie Teope caught up with Succop to ask him about LeBron wearing his number. Read more from Herbie at ChiefsSpin.com.

Share All sharing options for: Ryan Succop is excited that LeBron James might be a Chiefs fan

Elite athletes with star power draw immediate attention, either by word or deed.

And when an athlete like NBA superstar LeBron James, arguably the best basketball player on the planet, wears what appeared to be a Chiefs No. 6 jersey on ESPN's SportsCenter, people notice. 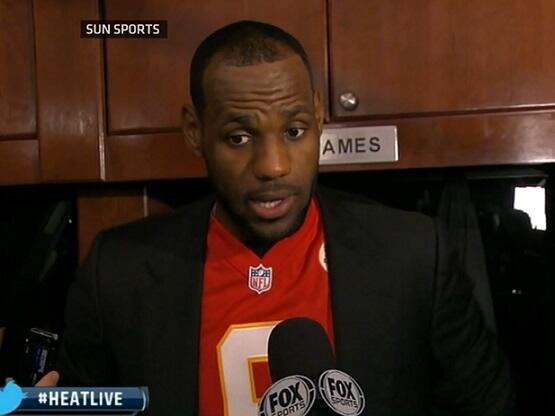 "I did see that," Succop said with a laugh.

The fifth-year pro said he didn't find out about James wearing his jersey until Saturday morning, with the initial notice arriving when Succop said his teammates started teasing him.

"I didn't know about it until I got in to work yesterday morning," he said. "And all the guys were like, ‘Oh, man. He's wearing your jersey,' giving me a hard time about it. A lot of the guys thought it was pretty neat."

So how did Succop feel when he finally saw with his own two eyes James wearing his jersey?

Succop added he and James haven't been in contact, and then punter Dustin Colquitt, whose locker is next to Succop's locker, chimed in.

"They are buddies by the way," Colquitt said of his teammate and James. "They dated the same girl in school."