Nick Jacobs is a producer at Time Warner Cable SportsChannel in Kansas City. He is on the Chiefs beat. You can follow him on Twitter @Jacobs71 . You can follow the station at twcsportschannel.com

Share All sharing options for: How the Kansas City Chiefs compare to other playoff teams in toxic differential

People look for that one stat that indicates if their team is playoff caliber. While Super Bowl winning head coach Brian Billick was the offensive coordinator of the Vikings, he came up with a formula called toxic differential. 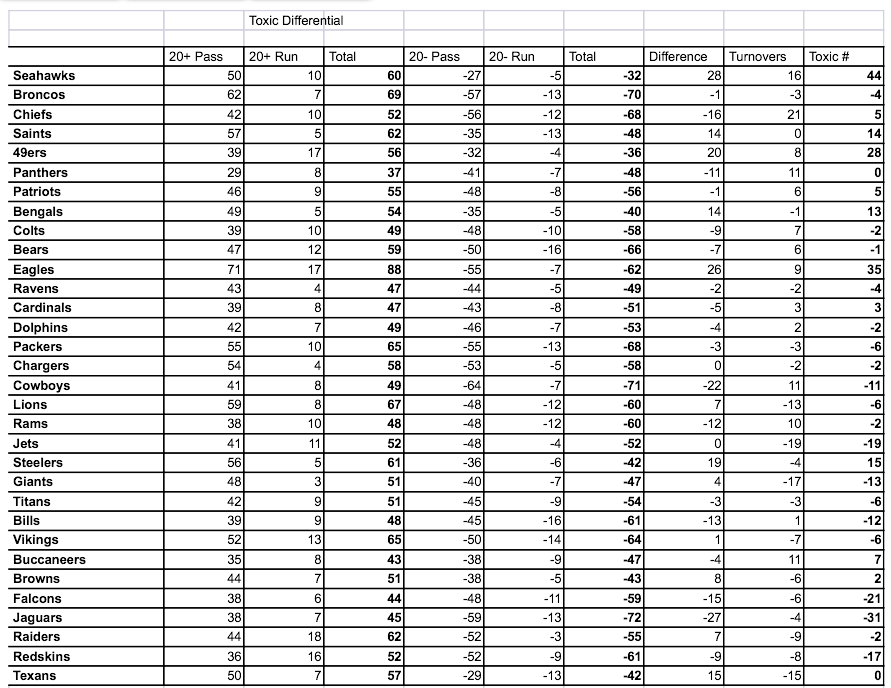 *Sorted by best to worst record.

So as you look at it now. The Seahawks are the most dominate at +44 . The Eagles offense is actually more explosive than the Broncos at +88 vs +69.

In four AFC West games since the bye week, the Chiefs are -29 in plays their defense has given up. They were -19 during the three game losing streak and -10 against Oakland last week. Without those the plays given up would be at -39 instead of -68, which would bump their toxic from +5 to +34, nearly right up there with the Seahawks, Eagles and 49ers of the world. And that would likely mean a No. 1 seed because they could have won the two games at home.

Basically, the Chiefs defense has given up 16 more explosive plays than the offense can match.

Here are some other comparisons from over the years.

5 things to know about Colts vs. Chiefs

Can the Chiefs defense sack Andrew Luck? And more questions.

Start me up: Colts-Chiefs preview

Is Trent Richardson that bad? What has Reggie Wayne's absence done to the Colts offense?

5 things to know about Colts vs. Chiefs Start me up: Colts-Chiefs preview

The thing that's fun about toxic differential is the accuracy. Some of the top rushing or passing offenses don't make it to the post-season. They turn the ball over to much (2012 Chiefs) or their defense struggles. This is a great barometer of how teams stack up on a weekly basis.

By the way, you should look at the Texans against the Broncos. It shows Sunday may get interesting in their head to head numbers.

Until next time, keep crunching.