The Kansas City Chiefs just need to make that one play

Share All sharing options for: The Kansas City Chiefs just need to make that one play

In the first half of the season the Chiefs were the team on pace to shatter the sack record, matching defensive records that date back 30-plus years. The offense came alive here and there, mostly when they needed it most in the fourth quarter. But throughout the first half of the season, the quotes from others were always something along the lines of, "The defense is great but they'll never beat a Tom Brady or a Peyton Manning in the playoffs."

So far in the second half of the season, the story line has changed. The Chiefs defense has given up 300 yards passing in each of the last three weeks, with Peyton Manning passing 400 yards in his second shot at the Chiefs. The defense has given up over 100 points in the last three games. The Chiefs offense, however, has put up bigger stats, albeit in losses. Alex Smith has three straight multi-touchdown games. They've scored 66 points in the last two weeks.

The funny thing about these Chiefs is that excuses for why each unit played well (or poorly) are easy to see. 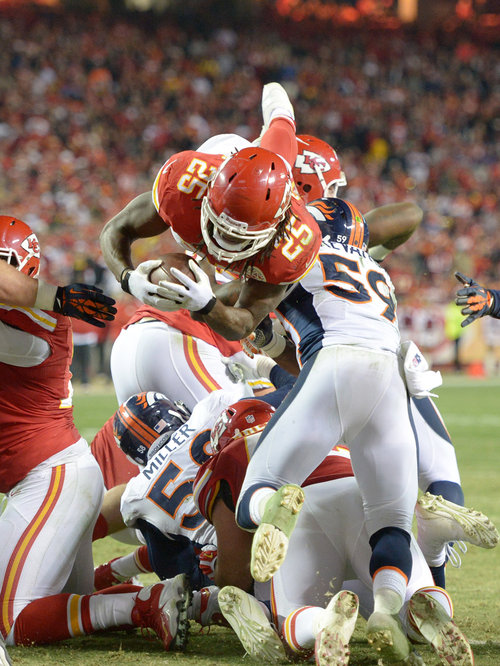 The Chiefs defense played so well in the beginning because, let's face it, they faced a lot of bad quarterbacks. A lot of bounces went their way. They were good but they were also lucky. The Chiefs have faced the soon-to-be league MVP in two of the last three weeks in Peyton Manning and the NFL's completion percentage leader in Philip Rivers in the other. Of course they struggled more against those quarterbacks.

Meanwhile, the offense has been inconsistent throughout most of the season. Early on the Chiefs offense simply came up big late in games when the team needed it the most. That was their calling card -- they were clutch. In the past three weeks the offense has been attempting more downfield passes and scoring more points. The drops have been more glaring as the season goes on, the games get bigger and Alex Smith is throwing the ball deeper. But the Chiefs had the ball on the 13-yard line with a chance to tie the league MVP and one of the NFL's best teams. That's pretty good, no?

It always comes down to one or two plays. That can change everything. Last week, for example, if Sean Smith can reach his arm up just six more inches and tip Rivers' game winning TD pass, the big story line isn't that the Chiefs secondary sucks. It's that the Chiefs defense is clutch. If Alex Smith can just complete that 4th-and-4 pass in the final two minutes, then the story line changes that Alex Smith CAN keep up with the Peyton Mannings of the world.

I'm trying to keep the big picture in mind here. The losses are frustrating but I keep coming back to the idea that if you asked me three months ago how I'd feel at 9-3, I would say pretty damn good.

It's just one play that changes everything. And I guess that's where I'm going with this. After all the losing the last few seasons, I'm content if the Chiefs can just get themselves in a position where they have the opportunity to make that one play.