Kansas City Chiefs have a secondary problem; What's the solution?

The biggest problem with the KC Chiefs right now? Most say it's the secondary.

Share All sharing options for: Kansas City Chiefs have a secondary problem; What's the solution?

So what's your biggest issue with the Chiefs coming out of this game? What must be fixed ASAP?

By far the most common answer had something to do with the secondary. 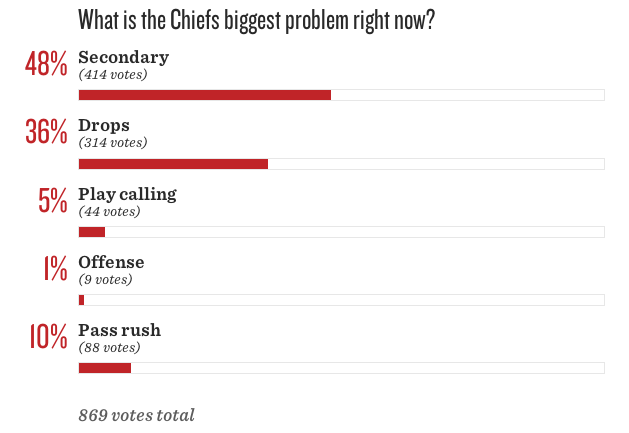 @ArrowheadPride Lack of adjustments by the defensive coordinator.

@ArrowheadPride Bench Cooper. We spent a bunch of money on Dunta Robinson, let the man play.

@ArrowheadPride defensive play calling. When you can't match up with a wr, don't constantly give them man to man

Looking at the Chiefs stats, the secondary does stand out. The opponent's passing yards in the last three weeks: 323, 292, 403. Of course, those are against Peyton Manning and Philip Rivers but you could still argue the secondary's struggles became noticeable dating all the way back to the Texans game in Week 7 (Case Keenum anyone?). This week is was Marcus Cooper and Brandon Flowers giving up big plays. Last week it was Sean Smith and Quintin Demps blowing the final game-winning touchdown.

So this isn't really a new issue. It's a bigger issue as the games get bigger.

Marcus Cooper, who was lit up on Sunday by Peyton Manning, acknowledged after the game that a rookie corner seems like a good person to pick on, especially if you're Peyton Manning.

"Just gotta get back to the basics," Kendrick Lewis said. "Go out and see what we did wrong and correct our mistakes and get back to playing Kansas City Chiefs football."

"[Peyton has] played a lot of football," Eric Berry said. "You have guys that play football and you have football players. He's a football player. When it's down to it, he's going to make plays. You just have to try to set yourself up in the end to where you can compete with him and compete in the fourth quarter. That's what we did. We just have to keep pushing; it's a sense of urgency tomorrow. We're going to try to get these things corrected."

The Chiefs players, for the most part, didn't seem torn up about this game. Don't get me wrong -- I don't think they like losing -- but they realize there's a lot of season left.

So how do they fix whatever has been wrong on defense?

Here's the thing about changes: Bob Sutton probably isn't going to significantly alter the philosophy of his defense. The Chiefs are going to do what they do. I wouldn't expect big changes to what he's doing because, even though the Chiefs have struggled the last three games, this is the same defense that propelled them to a 9-0 start. If anything is going to change, I would guess the most likely would be the personnel, not wholesale changes to the scheme.

It's impossible to truly lay blame on some of these plays but someone is obviously to blame. Maybe the pass rush should have gotten there sooner. Maybe the safety should have come over and helped. Maybe the linebacker was responsible for one someone. Whatever it is on each play, it's obvious the Mannings and the Rivers' of the world have the Chiefs number. Unfortunately, those are the types of quarterbacks the Chiefs are likely to play in the playoffs (assuming, you know, they make the playoffs).

So, this sucks. And I'm not really sure what the answer is.

Other popular answers to the question above:

@ArrowheadPride they should try catching the ball

@ArrowheadPride Poor play by WRs. Cannot keep dropping balls and not get open.