Chiefs vs. Raiders: The best and the worst

The Chiefs pooped on the Raiders 56-31. These are the best and worst moments from the game.

Share All sharing options for: Chiefs vs. Raiders: The best and the worst

No, that is not an incorrectly placed IP address.

Each of these numbers possesses a very distinct meaning when it comes to the Chiefs and Raiders this season. But what do all they all add up to?

Another, slightly less fun number: 2006 - The last time the Chiefs swept the season series with the Raiders. No mas. Not after the Chiefs boom-blasted their second straight inferior opponent, sealing their playoff berth in the process.

The Chiefs are in!

A quick moment of perspective before St. Dirkolas hands out some Best and Worst gifts for this royal beatdown.

This morning, I was up to my knees calculating different AFC playoff scenarios (not as clear cut as you might think after the Bengals and Patriots lost).

Last season, at this time, it was collegiate box scores, scouting reports, and scattered NFL coordinator Wikipedia pages, in hopes that this franchise's savior was available either with the first overall pick or hidden on a coaching staff somewhere.

One of these is more fun than the other. And almost as fun as kerplopping the Raiders twice in one season.

The Best and Worst w/ His Dirkness

Best offense and best defense, be damned - In my lifetime, I've seen the Kansas City Chiefs go into the NFL playoffs with the best offense in the league (2003) and the best defense in the league (1995, 1997). Now I'm ready to see them head into the playoffs with a top five unit in each. That's right, a TOP FIVE UNIT in both offense and defense. Amazingly, the Chiefs rank higher in scoring offense (third) than they do in scoring defense (fourth) right now (what were the odds on that five weeks ago?). At this juncture, the Chiefs have a hot QB (the most common attribute of Super Bowl winners over the past decade), the best running back in the NFL, and a defense with the potential of playing like the league's best. Perhaps best of all, nobody is taking them seriously as a threat. I love where the 2013 Chiefs stand right now. Love.

Best receiving day since....Jerry Rice?!? - Jamaal Charles. Jamaal FFFFFFFFFF'ing Charles! 187 receiving yards and 4 touchdowns on the day, two (somewhat arbitrary) numbers that haven't been reached since Sir Jerry in 1990. Think about that. Not Moss. Not Owens. Not Calvin. Not Carter. Not Harrison. Not Bruce. Not Wayne. (Ha, Batman!) Not Brown. Hell, not even J.J. Birden. But GOD JAM Charles has. I wish I could've retweeted this 187 times...

Best of the best athletes in the world - Hold grudges. Michael Jordan and Jerry Rice immediately come to mind. They live in a state of delusion, this distorted reality, where they have absolutely convinced themselves that everybody is doubting them. They hold on to things from high school (MJ getting cut from his high school team - actually false) or college (Rice attended tiny Mississippi Valley St.) and use it as a form of daily motivation. It drives their competitive nature. And it drives them towards greatness. Which brings me to Jamaal Charles, who had this to say about his end zone dance...

"After I tore my ACL, I just came up with a thing, every time I touch the ball, I'm going to wipe the haters off me. People said I would never come back from his ACL, he won't be the same. I make sure I wipe it off for those who doubted me, and I try to wipe down my ACL to let them know you got the haters out there. That's a thing I came up with but I hope I can keep wiping it down."

Don't be good, Jamaal. Be great.

Best way to describe Ground Chuck's day - He earned JamaALL of the Escalades.

Best way to score five touchdowns - Untouched. Seriously, go back and watch the highlights, Jamaal Charles wasn't TOUCHED on any of the five TDs (maybe a defender clipped his leg on the rushing TD. Challenged ... inconclusive, the statement stands as called!). So how bout some love for the big uglies, who are gellin' like Magellan right now. Rodney Hudson took out three guys with his block on the first TD. On the second TD, Jeff Allen makes a block more than 20 yards downfield! Geoff Schwartz should've been starting on the line since day one. Eric Fisher is steadily improving as the year goes on. And Donald Stephenson is making Branden Albert look more and more expendable by the minute. This offense's midseason turnaround begins and ends with the improvement of this offensive line.

This offense's midseason turnaround begins and ends with the improvement of this offensive line.

Best bye week coach in the NFL - Andy Reid. What, this can't be true because we lost to Denver following the bye week? Balderdash! The Chiefs have scored 184 points over the 5 games since the bye week (36.8 ppg). The Broncos have only scored 164 in that stretch (including their own 50 burger). Hell, the Chiefs only scored 211 points the entire season last year! I said the offense's turnaround begins and ends with the line, and I think the line's turnaround begins and ends with Andy.

Best offensive output of the NFL season - 56 points. Or, as Chiefs fans from Week 4 might call it, "Three Jamaal TDs, two special teams TDs, and three defensive TDs ... over a four week period."

Best part of Alex Smith's game - He is at his best when it matters most. It's almost easy to forget that the Raiders turned yesterday's Jamaalihilation into an actual, real life football game at one point. 35-31 with the Chiefs facing 3rd and 1. Boom! Playaction, wheel route, perfect throw, 42-31, goodnight sweetheart. But Alex has been doing this all season. He came up with a big drive to seal the win in both Philly and Tennessee. He led multiple lead changing drives against San Diego in the fourth quarter. He fought back from two scores down against Denver. I'm at a point now where I trust Alex with the game on the line. And in the NFL, if you don't have an elite QB, you best damn have a clutch one. And I say Alex is clutch.

Best way to beat Oakland remains - Stay patient, and eventually they will Raiders themselves. Worked last time. Worked this time (to the tune of seven turnovers).

Best reason the Raiders are no longer the Chiefs biggest rivalry - The last time both teams had a winning record in the same season was 1994. The Raiders still played in Los Angeles then! Meanwhile, the Chiefs and Broncos have shared winning seasons in the same year six times since 1994.

I'm at a point now where I trust Alex with the game on the line. And in the NFL, if you don't have an elite QB, you best damn have a clutch one.

Best Chiefs fan in the world - This guy.

Best case scenario for AFC Playoffs outside of a Peyton Manning injury because who would ever cheer for that - If the Patriots lose again (@Ravens, Bills at home), they could fall out of the 2 seed, which might leave the Chiefs with an Indy-Cin-Den path to the Super Bowl. Or Cin-Indy-Den. Or maybe New England in the first round (yikes ... I think?). Or even, an Indy-Cin-Baltimore path, with Arrowhead Stadium hosting the AFC Championship!!! Ow, now my head hurts. FUN!

Worst case scenario for AFC Playoffs - The Ravens win the AFC North (they actually control their own destiny at this point) and host the Chiefs in Round 1 fresh off victories over Detroit, New England and Cincinnati. That is a battle tested defending champion right there. So...go Lions tonight!

Best new desktop background - This gem. Finally, I can replace this one. 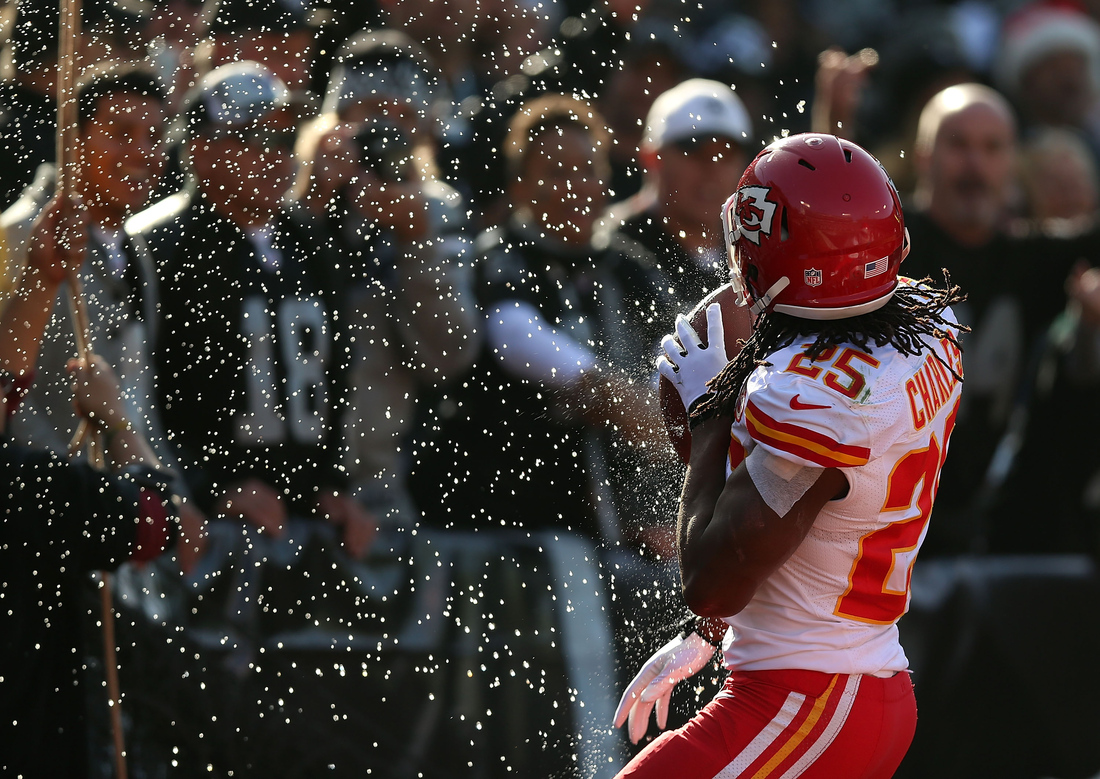