The Kansas City Chiefs put the smackdown on the Oakland Raiders at O.co Coliseum on Sunday, 56-31, clinching a playoff spot along the way. The Chiefs moved to 11-3 and in a tie with the Denver Broncos for the AFC West lead by beating the Raiders on Sunday. The Chiefs defense created seven turnovers while Jamaal Charles put up an incredible five touchdowns -- four receiving, one rushing. Read on for a drive-by-drive recap of the game. Up next for KC is a visit with Indianapolis at Arrowhead.

Chiefs start at the Raiders 49-yard line thanks to a big return from Quintin Demps.

The Raiders have their own big play when Marcel Reece takes a short Matt McGloin pass 45 yards.

McGloin missed a wide open Reece near the end zone. He just overthew the pass.

McGloin throws it four times on the drive, completing two of them for 57 yards.

@ArrowheadPride our D got lucky that possession......

Impressive third down catch by Dwayne Bowe with a quick slant.

Bowe said in Chiefs video this week that Big Red has been happy with his slants lately. There ya go, 3rd down conversion

Donnie Avery snuck open on the very next play for 23 yards down the right sideline.

Alex was sacked for an eight yard loss. Jeff Allen was beat by Pat Sims.

SCORE: On 3rd-and-19, Alex was pressured and dumped it off to Jamaal, who got into the open field and blazed his way to a 39-yard touchdown. 14-3, Chiefs.

Also on Jamaal's TD, it was a great catch. Ball was high. He caught it with one hand and pulled it in. So much awesome

Jamaal Charles has 2 catches for 88 yards and 2 touchdowns in the first quarter. #Chiefs #KCvsOAK pic.twitter.com/fmOi13BB73

That's the 11th return touchdown for the Chiefs this season, tying a team record.

Most first quarter points for Chiefs since December 6, 1998, according to CBS 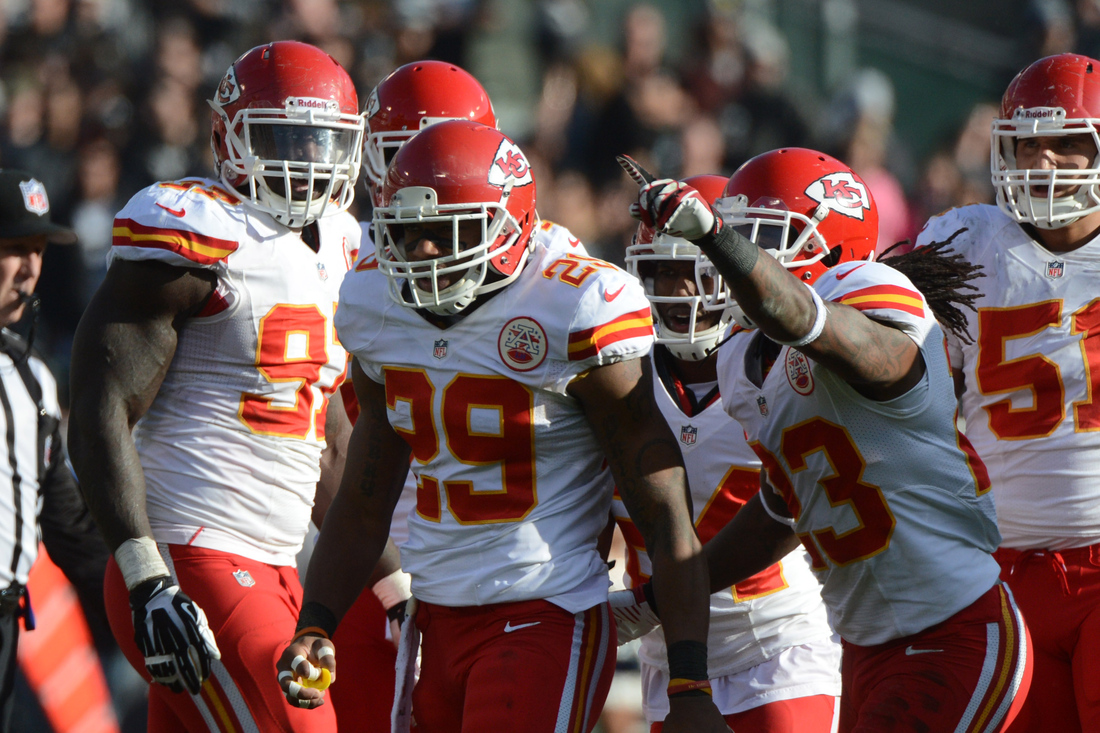 The Raiders drew a pass interference call on Brandon Flowers for 26 yards.

McGloin hit Streater on a crossing route for 23 yards down to the 8-yard line.

The Chiefs sent a blitz on third and goal but the defense picked up two penalties -- defensive holding and roughing the passer. The Raiders got a fresh set of downs.

Terrelle Pryor came into the goal line and ran the ball but Akeem Jordan stopped him. Unfortunately, Jordan also picked up a personal foul.

The Chiefs were aided by a pass interference call against the Raiders on third down. Alex was eyeing Dwayne Bowe.

The Chiefs continue to commit penalties. Geoff Schwartz was flagged for a face mask on third down.

The Chiefs started on the Raiders 11-yard line.

Jamaal caught a pass over the middle and brought it to about the 1-inch line.

SCORE: Chiefs bring seven offensive linemen and Jamaal punches it in for his third touchdown of the day. 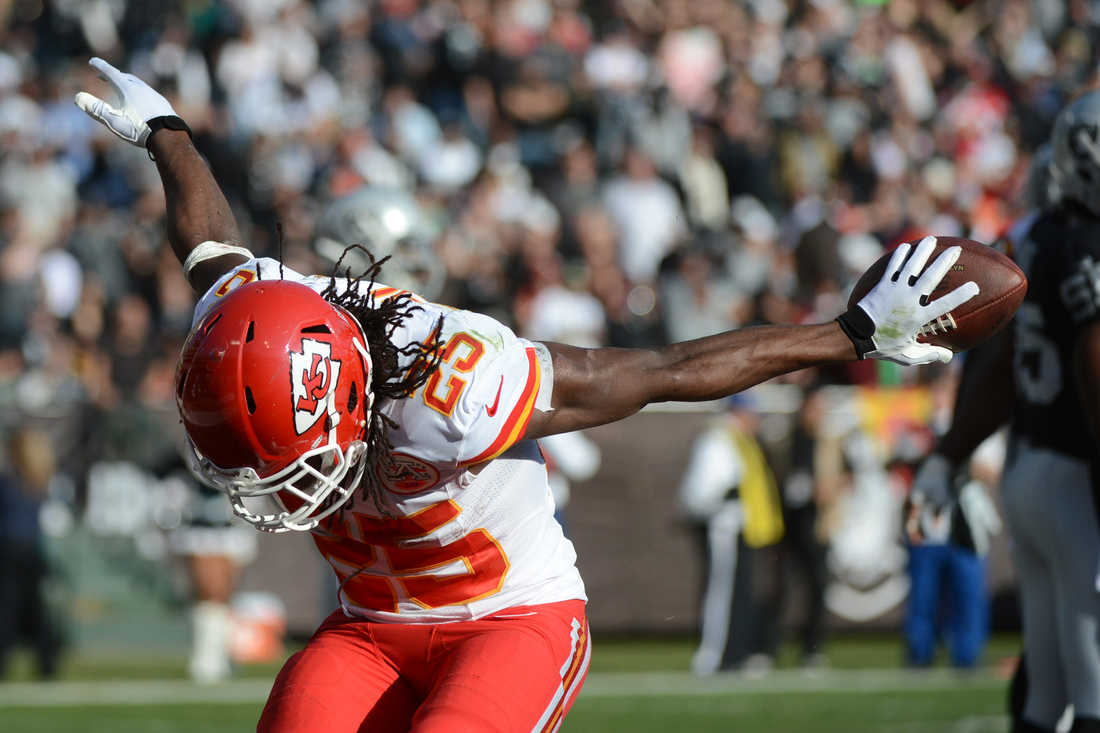 Raiders start at the 40-yard line.

Oakland can't do anything and they decide to FAKE PUNT! They actually converted it on a 22-yard pass from Marcel Reece. The snap went directly to Reece, the running back, and he threw it to a wide open gunner on the outside.

Eric Berry with ANOTHER interception. The Chiefs brought the heat on the blitz and McGloin forced a throw. Berry stepped up to pick it off.

SCORE: Jamaal takes it in from 16 yards out on the first play from scrimmage. Four touchdowns for him. 35-10, Chiefs.

I think it is safe to say Reid and his staff saw some problems in the Raiders screen defense when looking at the tape. 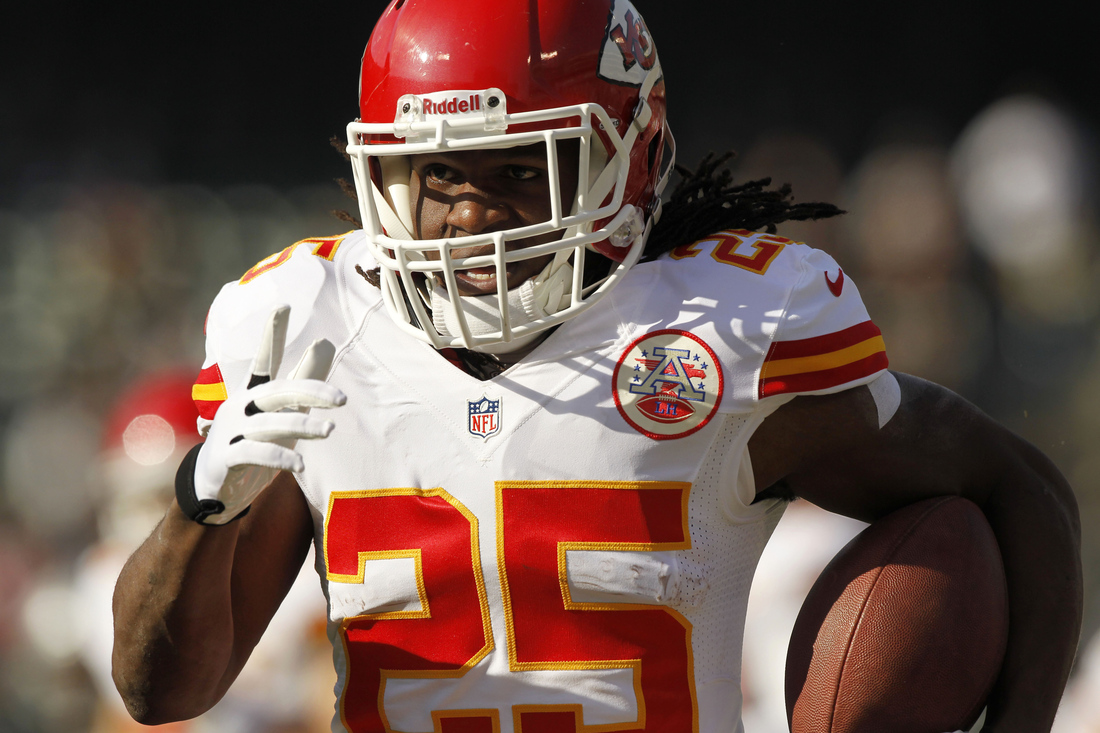 SCORE: The Raiders score with a short run from Rashad Jennings. 35-17, Chiefs.

Chiefs start at their own 20-yard line.

Alex Smith had an 18-yard run that was wiped out due to a holding call.

Alex tried to go deep to Bowe but it was knocked away.

Chiefs come up short on 3rd-and-15 and are forced to punt.

The Raiders run it out before halftime. 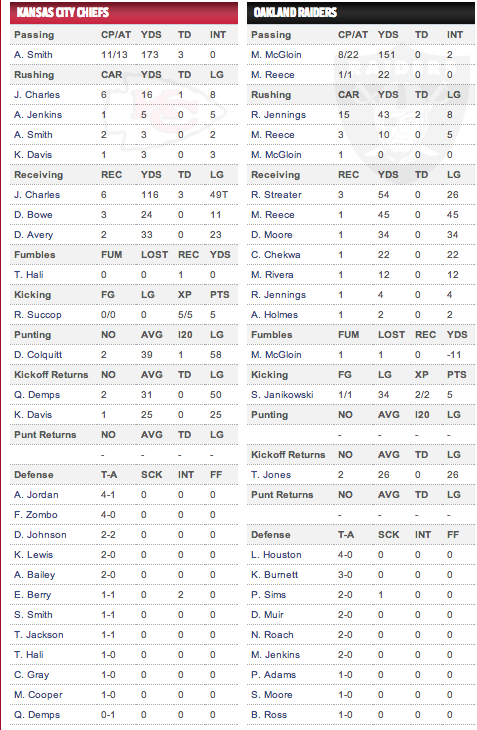 McGloin passed to Andre Holmes for 22 yards and then to Taiwan Jones for 52 yards, setting themselves up near the goal line.

SCORE: McGloin scrambled right and then found Holmes in the middle of the end zone for six. 35-24, Chiefs.

Chiefs can't do anything. 3-and-out.

In 1-on-1 coverage vs. Marcus Cooper, Andre Holmes caught a 28-yard pass.

The Raiders continue to get yards in big chunks.

Only 30 players in NFL history before today had caught four touchdowns in a game. Jamaal Charles is the 31st -- and the first running back.

The average yards after catch on Jamaal Charles' four TD receptions today is 41.8. 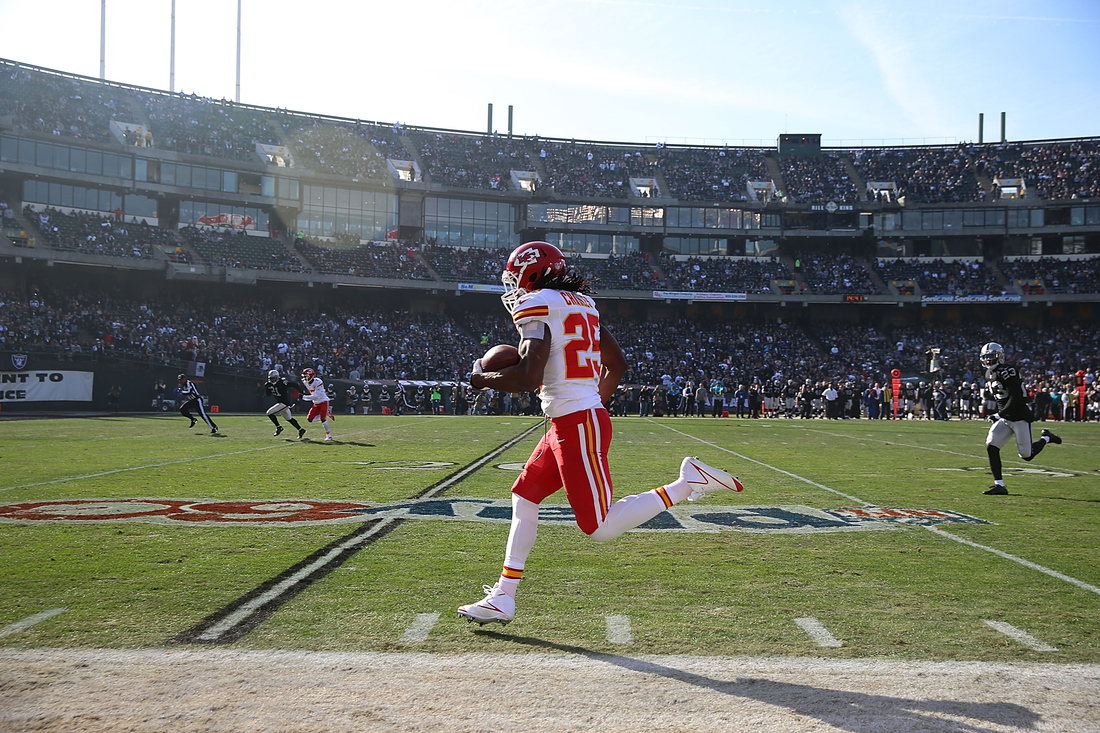 Turnover. Raiders fumbled the ball and the Chiefs recovered. It was not ruled a fumble but Andy Reid challenged the play and got the ruling in his favor. Chiefs ball.

SCORE: Alex hit Sean McGrath for a touchdown from six yards out. 49-31, Chiefs.

Alex gives it right back, fumbling the ball in the pocket and the Raiders recovered.

For the second straight week, Derrick Johnson picks off a pass.

SCORE: Knile Davis is in the game and his 17-yard run makes it 56 points for K. Knile looked really strong on his touchdown run. 56-31, Chiefs.

Raiders go 3-and-out and punt it away.

Dustin Colquitt pints the Raiders at the 1-yard line.

The #Chiefs 56 points today is the most scored in the #NFL this season.

Chiefs back-ups are in the game, trying to end the game. 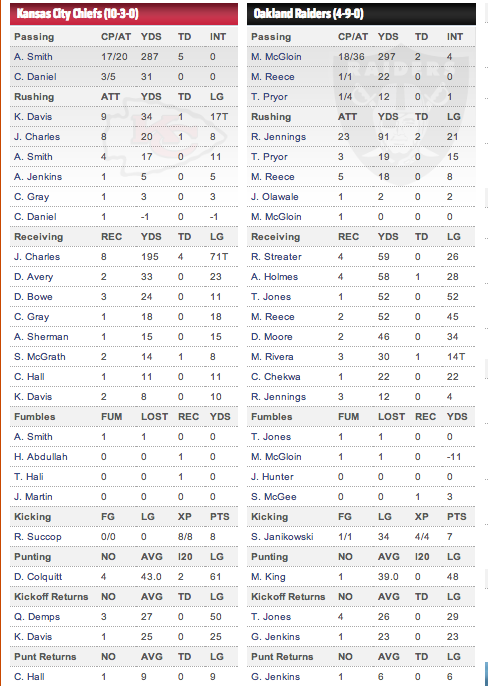 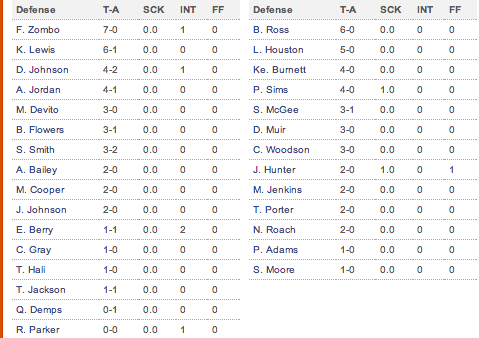