Quotable Dwayne Bowe is back. Read some great ones below.

Share All sharing options for: Dwayne Bowe credits yoga for his last TD, introduces "D-Bowe-ing it"

Dwayne Bowe is the best interview ... ever?

The latest in a video at KCChiefs.com includes so many great quotes. Let's just run down all of them.

On his TD catch in the Redskins game

"Third down, they normally play Cover-1, which is a single safety with a man tight on me. That's my best route I run. Coach had been extremely happy with the way I had approached my slants all month. He said if I call your number, I need you to get into the end zone. He called it and I made a great catch. Being 215 [pounds], bouncing off those guys and trying to get into the end zone, man, trying to find it and I got in there." 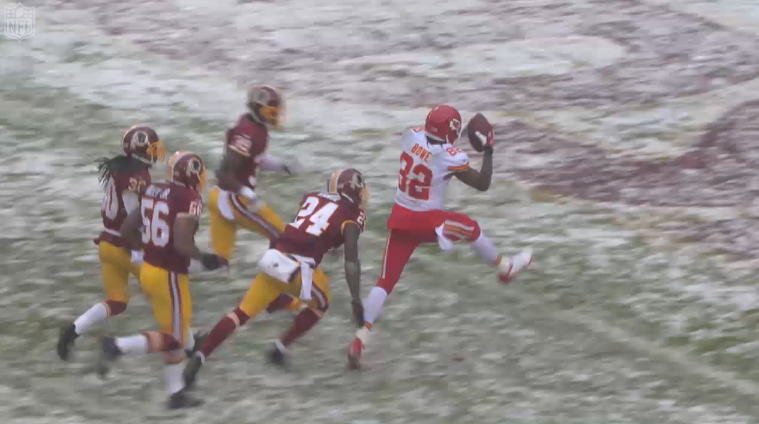 "The snow definitely gives me an advantage. After the game I talked to some of the linebackers and they said nobody wants to hit or be tackled in that kind of weather. If you're a big physical guy, they're going to take bad angles or try to hit you up high. Just having great balance, doing yoga every week, helped me get into the end zone."

'That's D-Bowe-ing it right there'

"That's definitely my type of play. That's D-Bowe-ing it right there, taking on some hits, breaking some tackles. Stuff I did earlier in my career and I'm just refining myself bringing it back, especially when you play in the snow you're going to have these types of games. I'd rather play all of my games in the snow if I can get those types of touchdowns."

"Just like normal men go through their every day life looking out for their family and they'd do anything for their family. I stress that to the guys in the locker room because at the end of the day we spend more time here than we do with our family. Guys approach it that way. They'll do whatever it takes to help the man next to them. They're looking at guys as brothers, it's a brotherhood. That's what we got going. We play tight, we got each other's back and we're riding high right now."

That's D-Bowe-ing it right there, taking on some hits, breaking some tackles.

'I have a couple great speeches left in me'

"Being here for 7 years, it's time for me to step up and become more vocal and be that guy that people look up to when it's time to find that edge. I have a couple of great speeches left in me and I'm just trying to spread the word and make it contagious for guys to catch onto."

"Big Red, oh man, he's a phenomenal coach. Father figure, the way he treats the guys in the locker room, the way we handle the business on and off the field, that's who you want to be a leader for you. He's the leader of our team. It trickles down to us from just following his role, I try to pass it down to my guys."

"Those losses definitely helped us refine ourselves and now we're playing with that edge."