The Kansas City Chiefs moved to 9-3 on the season after losing their third game in a row and second in three weeks to the Denver Broncos. The Broncos beat the Chiefs on Sunday at Arrowhead, 35-28. KC jumped out to a 21-7 lead in the game but it was all Peyton Manning after that as the Broncos QB put up a whopping five touchdown passes and 28 unanswered points. The game will be remembered for the Chiefs hot start, their late offensive run, the defensive meltdown (Marcus Cooper) and Donnie Avery's multiple drops.

Jeff Allen picked up the first penalty with a false start.

Turnover: From the 1-yard line, Alex rolled out to his right looking for a receiver and threw it right to the Broncos' Wesley Woodyard.

First play: Peyton Manning continues picking on Marcus Cooper with a 14-yard pass to Demaryius Thomas. Then it was 18 yards to Wes Welker who was tackled by Cooper.

Turnover: Chiefs return the favor with an interception by Quintin Demps. Manning went deep to Demaryius Thomas and the ball was batted in the air where Demps was able to snag it.

That was Chiefs S Quintin Demps' fourth interception of the season, tops for the team. 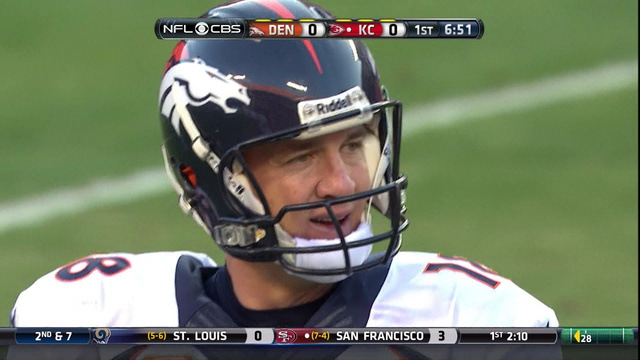 Thomas was apparently injured on the play with a questionable return.

All Jamaal, all the time. Charles picks up a 16-yard run and a 15-yard run on back-to-back plays.

Knile Davis sighting. The Chiefs RB goes up the middle for 20 yards and puts the Chiefs in the red zone.

Hemingway has five catches this year. Two have gone for touchdowns. His other one came against Jacksonville in Week 1. #Chiefs

Denver started off at 1st-and-20 from their own 11-yard line but Knowshon Moreno quickly picked up a 34-yard gain on a screen pass.

On a 3rd-and-4, Manning found Montee Ball over the middle for four yards. The spot of the ball was just past the first down marker. The Arrowhead video operator replayed it what seemed like a dozen times during a TV break but Reid decided not to challenge.

SCORE: Eric Decker splits the safety and Manning finds him for a touchdown from 41 yards out. All tied up, 7-7.

SCORE: Knile Davis takes it to the house from 108 yards back on the kickoff return. Chiefs lead, 14-7.

Turnover: Marcus Cooper catches a Manning duck of a pass for the interception. He returns it to the Broncos 22-yard line, giving the Chiefs great field position.

A great catch by Dwayne Bowe in the end zone is wiped out due to a penalty.

SCORE: Excellent pass-and-catch from Alex to Fasano, who tipped the ball back to himself to make the 12-yard touchdown catch.

Denver can't move the ball. They're forced to punt.

Dexter McCluster fielded the punt inside the 5-yard line for some reason. He was immediately drilled and the Chiefs started on their own 3-yard line.

On 3rd-and-8, Alex hit Fasano in the right flat for roughly eight yards. The referee spotted the ball just short of the first down. The Chiefs thought they got it. Andy Reid elected not to challenge it and punt it away.

Manning to Decker is successful again. It's a 42-yard pass to Decker, putting the Broncos inside the 5-yard line.

SCORE: The Chiefs forced Denver to a third down but Manning found Moreno from three yards out for the score. Chiefs still lead, 21-14.

Jamaal fumbled the ball but Fasano quickly recovered it. Whew.

Alex scrambled on a play from one side of the field back to the middle. On that play, Chiefs G Jeff Allen went down grabbing his leg and Broncos LB Von Miller also went down.

The Chiefs punted it away.

Manning can't do anything once again. Denver punts.

The Chiefs started this drive on their own 22-yard line with 1:28 left.

Broncos picked off Alex's first pass but a defensive holding call brought it back.

Alex rolled right and picked up 25 yards on the ground. But then he was flagged for intentional grounding on the next play.

The Chiefs punted away.

Things are getting chippy in Kansas City. Jamaal Charles broke off a 15-yard run and then also picked up another 15 yards after a Broncos player was flagged for hitting him late out of bounds. A couple plays later, the two sides started pushing and shoving each other again after Alex Smith was tackled.

On the second play of the drive, Manning hit Demaryius Thomas for a 77-yard gain.

SCORE: On third down, Manning hit Decker for his third touchdown. 28-21, Broncos.

Alex put a deep ball on the money to AJ Jenkins who ... dropped it.

Fasano lays out to make the third down catch but can't. Fasano is not all there, he's wobbly coming off the field

The Chiefs punted it away.

The Broncos start from their own 5-yard line.

Montee Ball picked up 45 yards on the ground on the first play from scrimmage this drive.

Manning to Thomas over the middle nets another 15 yards as the Broncos keep driving.

Even when the opponent isn't scoring a TD on Cooper, he's getting a pass interference. Tough, tough day (month) for him

SCORE: Manning to Decker from 1-yard out. Again.

On 3rd-and-17, the Chiefs picked up 17 yards on a pass to DMC. On the next play the Chiefs went for it and picked up the first down. Denver challenged the spot of the ball but the Chiefs won the challenge and the play was upheld.

SCORE: JAMAAL jumped over the goal line for the touchdown. Chiefs now down 35-28.

On 2nd-and-15 Sean Smith was flagged for pass interference. Just a killer penalty with under five minutes left in the game.

KC finally forces a punt out of the Broncos.

KC is starting from their own 8-yard line with 3:26 remaining and down by 7 points.

On 3rd-and-14, AJ Jenkins came up with a huge 26-yard catch to move the chains. DMC had a diving 28-yard reception over the middle of the field. And then a 23-yard pass to D-Bowe. Three 20-plus yard passes on the Chiefs biggest drive of the game.

The Chiefs could NOT convert on 4th-and-4 on the 13-yard line. Alex's pass to D-Bowe was incomplete.