The Kansas City Chiefs run defense has sprung a leak

One of the bigger concerns Kansas City Chiefs fans seem to have lately is the run defense, which gives up a league-worst 5.0 yards per carry. I watched the last three games to determine where the Chiefs have sprung a leak. Read on for my observations. Previously from Nick Jacobs: The routes Peyton Manning likes to run

Share All sharing options for: The Kansas City Chiefs run defense has sprung a leak 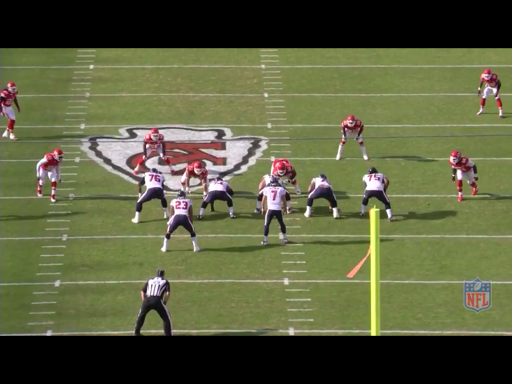 In the Chiefs game against the Texans, Houston got the Chiefs in a nickel formation that caused headaches last season. With so many teams stretching a defense in the shotgun and running off tackle, a defensive front like this is used from time to time.

On the play below, Dontari Poe is shaded on the outside shoulder of center. Mike DeVito is in a 3-technique. Tamba Hali and Justin Houston are wide 9s. Derrick Johnson and Eric Berry are essentially the middle backers. From a run perspective, this formation gives up the right side for an easy 4-5 yards. 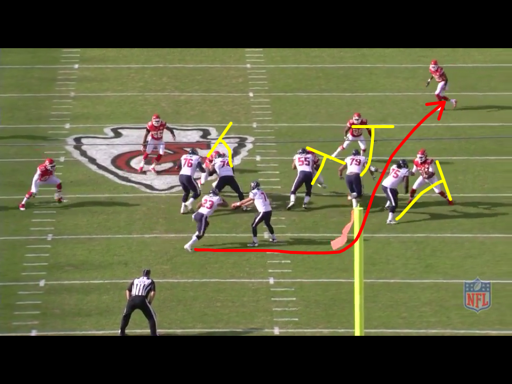 Once the ball is snapped, Houston does a good job at setting the edge and forcing the run back inside. Poe is doing a good job of maintaining the line of scrimmage. DeVito is taking on the double team. Hali is running down the line if Arian Foster decides to cutback. 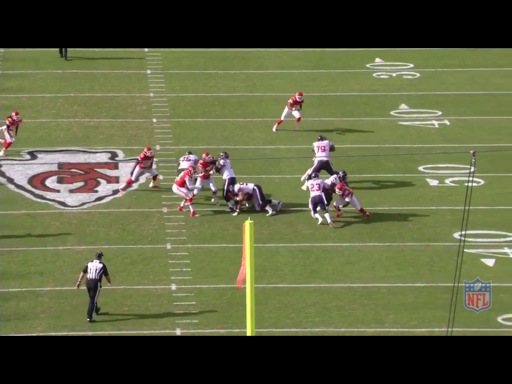 The center takes down Poe. Houston can’t escape his block. Johnson has taken too long to decide on the run and Berry was unable to avoid the right guard coming at him. Foster is able to get 11 yards on the play. In this formation the front side end (or outside linebacker in this case) needs to set the edge very quickly and force the run back inside. It is up to the backers to avoid the blocks and fill their gaps. Instead they are caught on skates and Foster moves the chains.

Now in the Browns game, Cleveland is backed up inside their own 10. The Chiefs use this defensive front again. Houston and Hali are both in wide 9s again. Poe is on the outside shoulder of the center. Berry and DJ are both in run support. The Browns are going to run off tackle to the left side. 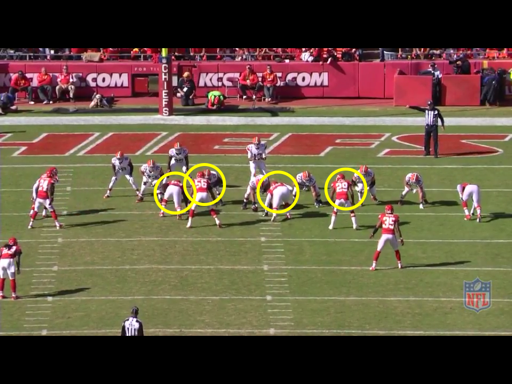 The right guard pulls on the play, so the center and left guard both down block. The center down blocks on Allen Bailey. Poe gets reached by the left guard. Eric Berry is caught out of position and makes life easy for Joe Thomas on the reach. Tamba runs to far up field and allows Jordan Cameron to kick him out. DJ gets caught up in traffic from the Poe and Berry blocks. Browns running back Chris Ogbonnaya is able to get 12 yards on the play. 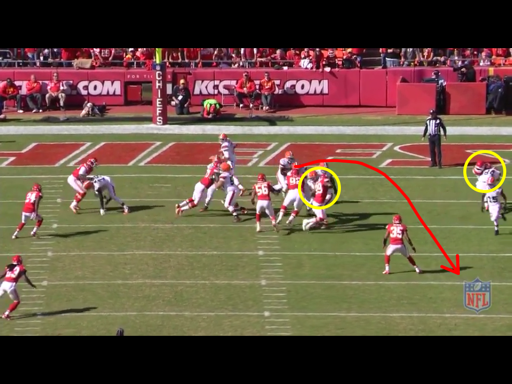 In the final game of the trilogy, Buffalo is at midfield and the king of the cutback is in the backfield. The Chiefs now have Akeem Jordan in for run support instead of Berry. Berry is responsible for the tight end in coverage. The Bills run the same play as the one above except they pull their center inside of the right guard. 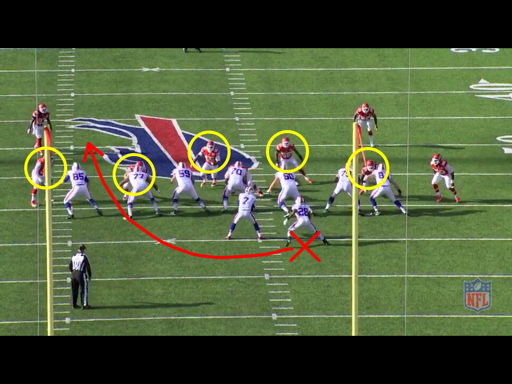 Tambai is kicked out by the left tackle. Poe gets down blocked by the left guard and fights off the block late. Tyson Jackson hesitates, allowing the right guard to get to the second level on DJ. Akeem Jordan gets kicked out by the pulling center. Houston is shuffling down the line of scrimmage incase Jeff Tuel keeps it on the read option. DJ over purses on the play. That allows CJ Spiller his cutback lane, and the only man standing in his way is Kendrick Lewis 15 yards downfield. Spiller ended up with 28 yards on the carry. 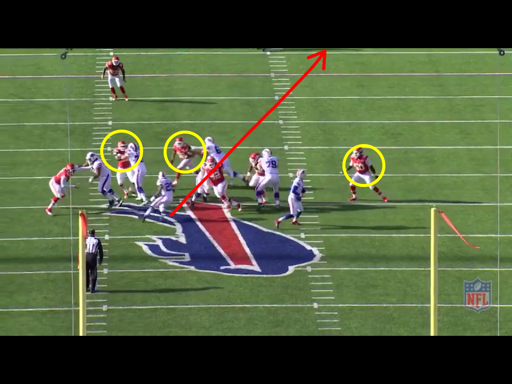 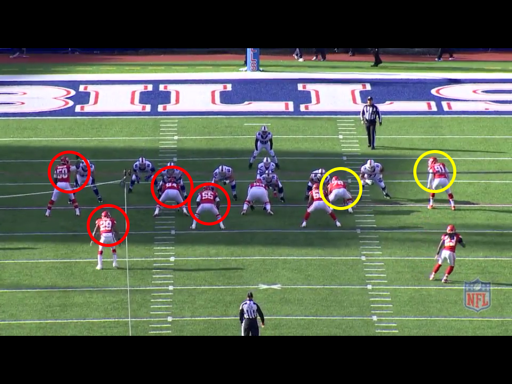 This was the first play of the second half for the Bills. It was a 61-yard run by CJ Spiller on another cutback. The Bills run a single back version with two tight ends. On this play, Poe gets double teamed by the center and right guard. Tyson Jackson crashes down hard, which is fine but Akeem Jordan needs to stay in that gap to take away the cutback or Eric Berry needs to come up hard into that gap. Jordan over purses on the play, Berry hesitates and gets blocked by the receiver. Spiller makes Berry, Flowers and Lewis miss the tackle and Spiller is rumbling down to the Buffalo 18. 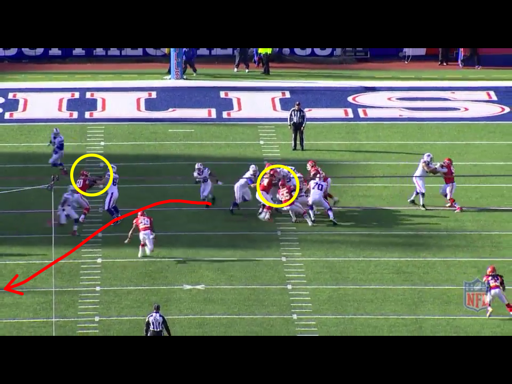 The reason all of the information above matters is because Denver ran this against the Chiefs last year in Kansas City and again at Denver. The Chiefs used similar formations and were exploited by Peyton Manning with it last year. 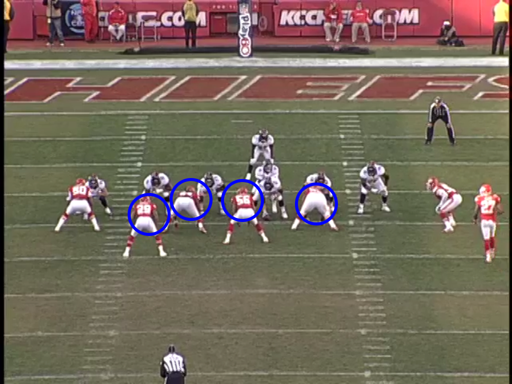 Houston is the strong side end on this play. Tyson Jackson is in a 3-tech. Poe is in a 1 tech. DJ and Berry are the backers on this play. The center and right guard both pull on this stretch play. 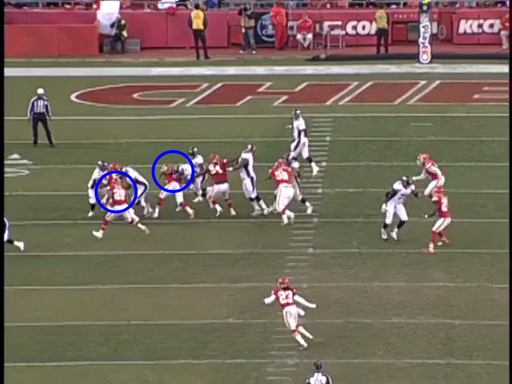 Houston gets locked up with the tight end. DJ over purses, Berry is out of position and Tyson Jackson didn’t knock the guard into the running back or the play would have stopped. That turned into a 15 yard run for Knowshon Moreno. The Broncos have this on tape from this season and last year. I fully expect Peyton Manning to try forcing the Chiefs into this defensive package. The question will be if Bob Sutton takes the bait. If he does and the run fits don’t improve, it could be a longer evening than most envisioned.