The routes Peyton Manning and the Denver Broncos like to run

The time has finally arrived. Nothing stands in the way of the game most fans want to see. The Kansas City Chiefs vs. Denver Broncos. The traditional game plan on stopping Denver will be out early next week. I wanted to give you an early taste of Peyton Manning's crew and what the Chiefs are up against. I picked out a handful of the Broncos touchdown plays to look at. 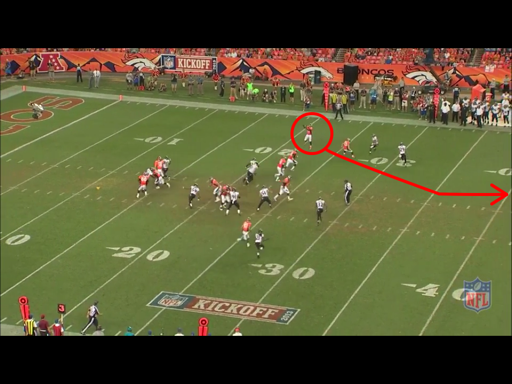 This is one of Manning's safety valves against a blitz. Opening night against the Ravens, Manning felt a blitz coming. With the defensive alignment to that side, a big blitz would be a back-breaker. The corner is playing almost 10 yards off of Demaryius Thomas so he won't be able to come up in time. Ryan Clady and Zane Beadles let the blitz come by them. They get out into space in a 3-on-2. 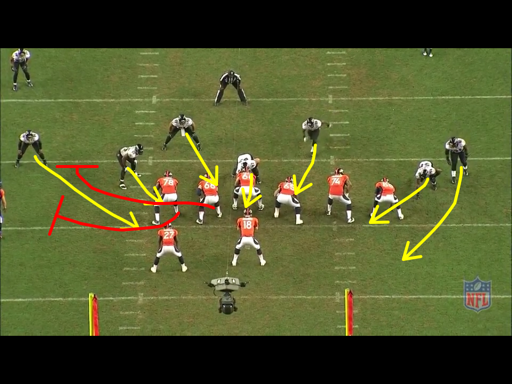 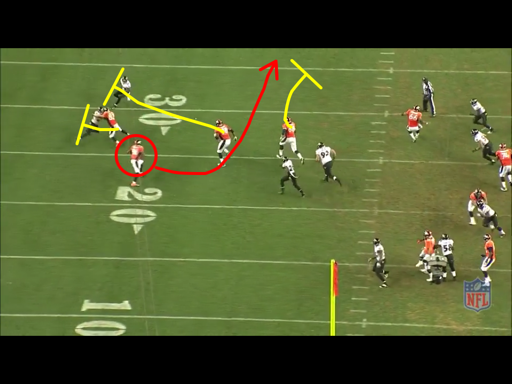 Wes Welker blocks the corner assigned to Thomas. Clady or Beadles need to take the safety assigned to Welker. The other seals inside if needed and Thomas is gone 78 yards for the TD. 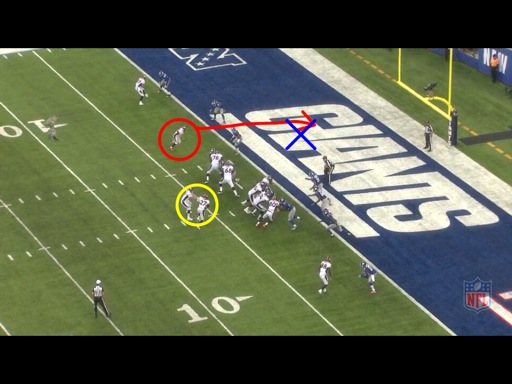 The call was a designed off tackle run with Knowshon Moreno. Julius Thomas, Eric Decker, Wes Welker and Demaryius Thomas are all asked to block on the play. Manning sees the defense has no high safety. So it is the perfect time for play-action. Manning gives Welker a hand signal. The entire team continues as if it were an off tackle run. Welker splits the difference between the defenders. Manning play-actions and throws for the easy TD. 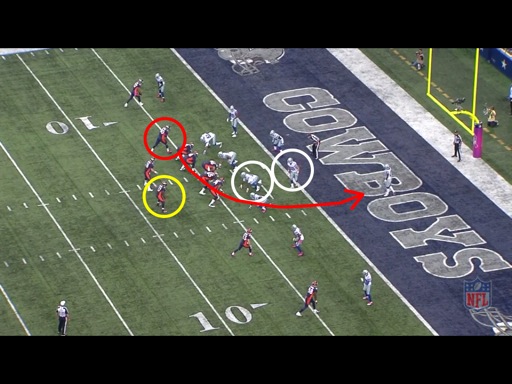 What's impressive about the shovel pass touchdown is how quickly Manning diagnosed the voids in the defense. They were in a run formation with a stretch or dive. He saw the void and audibled into a shovel pass out of their off tackle run formation. 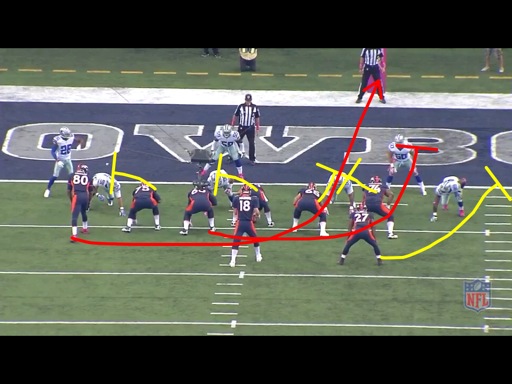 The 3-tech is angled in on the play. That makes for an easy double team into the backer at the point of attack. George Selvie has been coming hard upfield so he will run himself out of the play. And Sean Lee is going to follow Moreno wherever he goes. So the Broncos pull Beadles on the play. Double team the defensive tackle front side and down block on the backside defensive tackle when Beadles leaves on the pull. 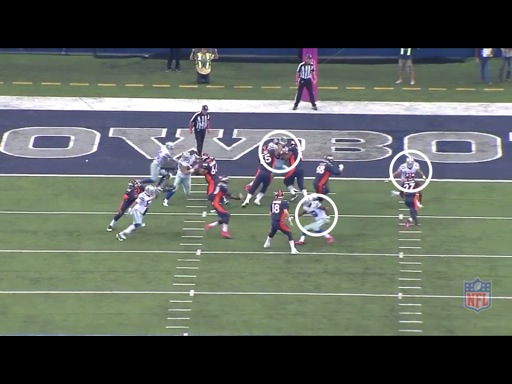 Lee follows Moreno out wide. When he realizes what's going on, Moreno and the pulling guard already have him doubled for the quick hitting touchdown. 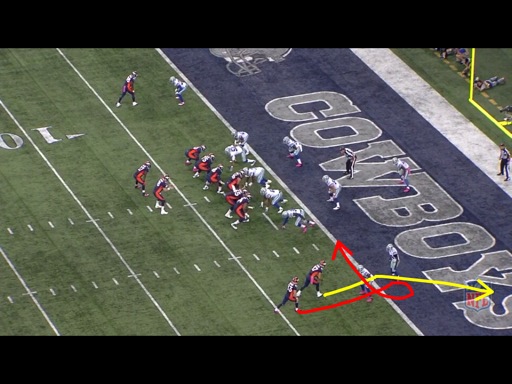 I don't know many receivers in the league, outside of Wes Welker, who would be able to run this route. The Broncos find themselves in the red zone during the third quarter. In a tight game, Manning felt they were going to blitz him on this play. He brought Moreno back inside to help protect. Eric Decker is going to initially run a fade route but turns it into a skinny post. Wes Welker is going to run a lasso route underneath. From tape study, Welker had typically run the out or slant in this area. So the Broncos use Welker to show the out. 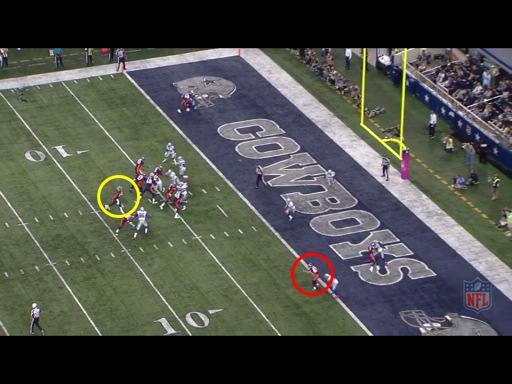 Orlando Scandrick bites and they hit him with the lasso. Manning held the safety or Sean Lee by locking on them until Welker completed his route. Sean Lee can't get over in time when he realizes it and it's a touchdown. 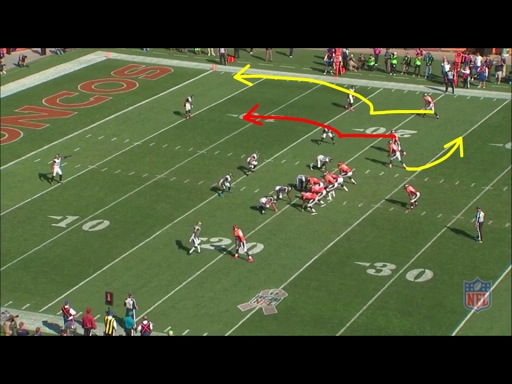 The screen pass is a staple of the Broncos offense. Manning loves to run it when he sees a blitz coming. On this play they use it as their play-action. Decker is the screen guy with Demaryius Thomas and Wes Welker blocking. Both corners fight the blocks to get to Decker. The backer also crashes down hard on the screen. 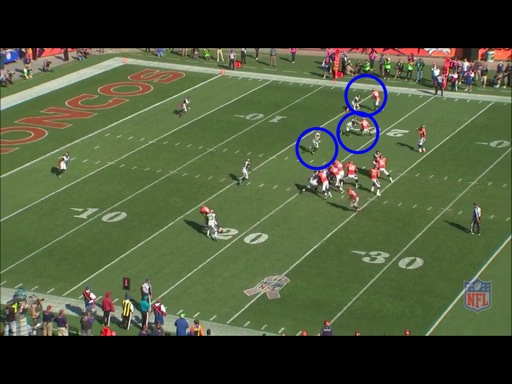 The backer and nickel corner create a huge void for Manning to exploit down the seam with the corner biting on the screen route. 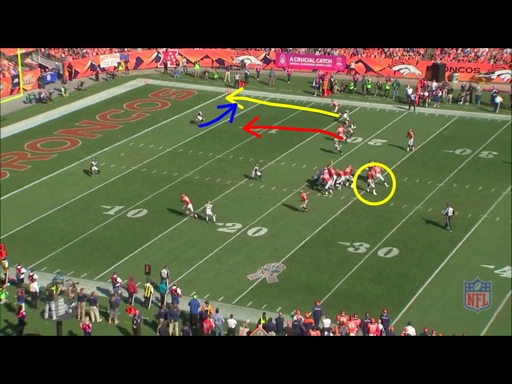 Welker and Thomas are now both able to run verticals against the high safety. It is a 2-on-1 and the safety chooses Thomas. So Manning throws to the void he created with the route by Welker, who is able to beat the two high safeties to the end zone. 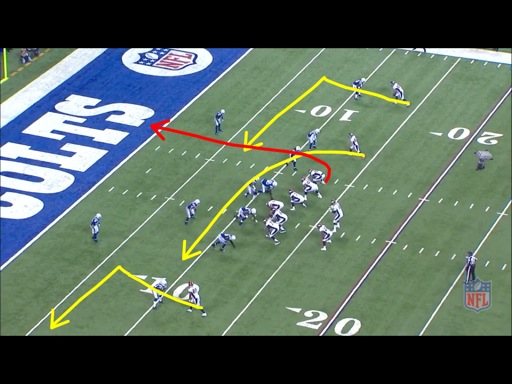 Julius Thomas is a mismatch nightmare for safeties and linebackers. He has the athletic ability of a possession receiver. What the Broncos run here is an out with Demaryius Thomas, a drag with Wes Welker and an in in with Eric Decker. Julius Thomas will get the seam against the safety. The Colts defensive end jams Thomas at the line. He passes him off to the backer. The backer protects from an inside route but eyes Welker on the drag the entire time. The backer passes Thomas off to the safety. 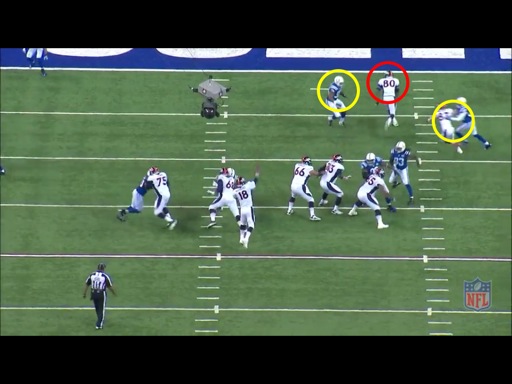