Nick Jacobs (@Jacobs71) is a producer at Time Warner Cable SportsChannel in Kansas City. He produces the Chiefs show #RedzoneKC and is on the Chiefs beat.

Now that Thanksgiving is out of the way, we can get back to focusing on the Chiefs vs. Broncos and how the Chiefs offense can feast on the Broncos defense this Sunday.

Previously: 4 things to fix on defense

When you look at the previous game without emotion. You see a lack of execution in certain parts of the game. That lack of execution kept them from sustaining drives and beating the Broncos. If the Chiefs offense can execute on Sunday, they will be in a great position. 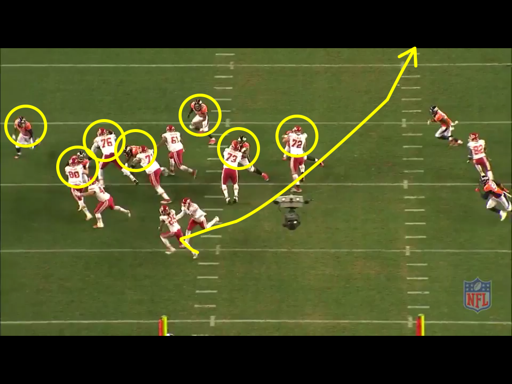 The Chiefs tried to run the stretch play against Denver but he Broncos defense swarmed to the edge and shut off that lane before it was even created. What that presents is a cutback lane. Denver was overly aggressive against the run. As shown in the photo above, the Broncos had seven guys on the front side of the play. You see a lot of wide-open space with one man to beat. Sometimes by Jamaal Charles' second step there would already be seven guys on the front side of the center.

The team needed to call cutbacks. When you call those though, the backside of the play must sustain blocks to allow that alley. I counted five times the cutback was there in the first half. Charles could have had one hundred yards by halftime if they had taken them. He did have that one huge gain from a designed cutback on the counter. 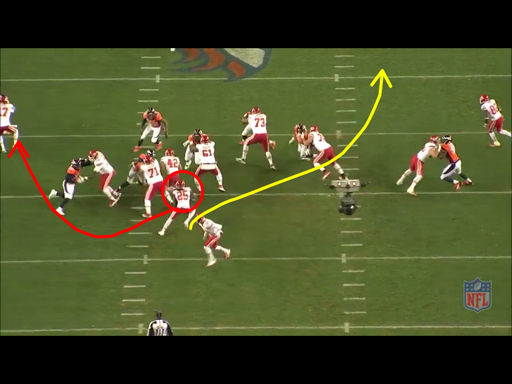 2. Hit them with the boot 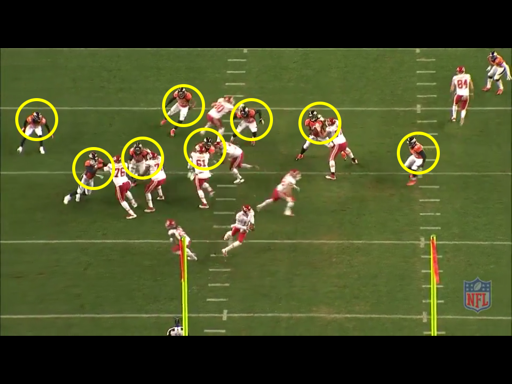 Early on in the game, the Chiefs tested out a bootleg pass with FB Anthony Sherman out of the flats for a first down gain. The reason this worked is because the Broncos were so dead set on setting the edge with their run defense. In the photo above, you see eight defenders who have bitten on the run fake. Sherman and TE Anthony Fasano are both able to cross the defense's face and both are open for big gains. The purpose of running the cutback and bootleg is to force the defense to stay honest, contain backside and force them to lose some of their aggression. If the Chiefs can take that aggression out of them, it should open up the front side runs again. 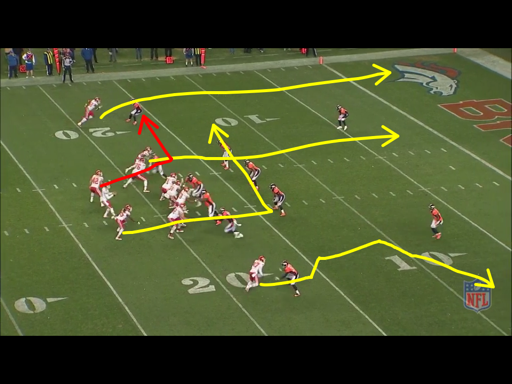 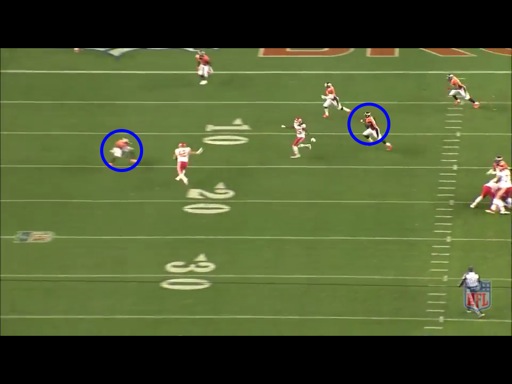 This first play is the Sherman fumble. Many have blamed Sherman for fumbling the ball. When you look at the play, there are a couple of other factors that contributed to it. The first part of the play, Sherman plants the defensive end on his butt with a chip block for Branden Albert on his way out of the flats. All Alex Smith has to do is throw the ball to Sherman's up field shoulder. Let him catch it, turn up field, ball will be in his left hand, so if hits, he fumbles out of bounds. Then let him use his right shoulder to truck the corner waiting.

Smith throws the ball behind Sherman at his hip. Sherman has to pivot in on the play towards the pursuit to catch the ball. He turns up field and gets held by his defender and hit by another one. That other defender was Jamaal Charles man. Charles had run a route into Sherman's area bringing his defender with him.

I do not believe that was the call since the right flats is wide open. If Charles had taken his defender to the right, Sherman wouldn't have taken that extra hit. 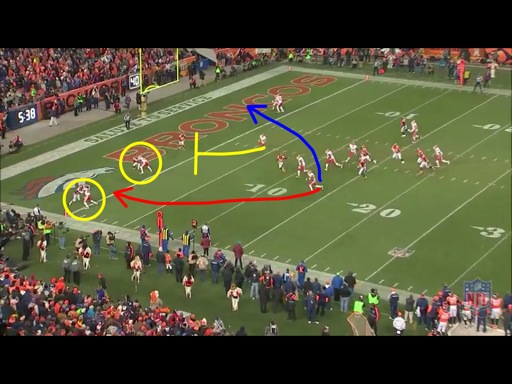 On another series, the play above is a screen with Knile Davis. If Davis makes the correct cut, he is running into the end zone for a touchdown. Instead the Chiefs had to settle for a field goal. The play called was a screen. It was the perfect call with great downfield blocking.

The issue for Davis is he needs to trust his blockers. Jeff Allen has set him up to cut backside. Allen's defender has over pursued across his face giving the middle of the field back up. If Davis cuts back, he has two extra blockers and a walk in touchdown. Instead he tried to use his speed to beat everyone to the corner. They lost four points on that decision. So the Chiefs have potentially missed 7-10 points on the two plays above. 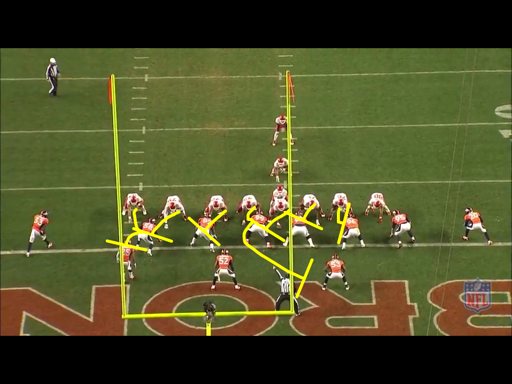 In the same series, it is third and goal, the final chance to punch it in for six points. The defensive alignment isn't going to allow them to account for everyone on the play. They must take the best chance. The weakness is the B gap between G Jon Asamoah and OT Eric Fisher. If blocked correctly the only decision should be which backer to combo block onto.

I picked the backside because it is an easier angle and block. I would have Fasano and OT Donald Stephenson combo block on LB Von Miller that eliminates him and the safety behind him. Fisher can't get beat across his face on the reach block. Asamoah and C Rodney Hudson need to double on DT Kevin Vickerson until Asamoah can peel off to the backside linebacker. No. 33 and 52 would be left free for Sherman to pick up one, likely 33 given his angle. Charles could then cut back inside but would need to make No. 52 miss in the hole if he didn't over pursue. 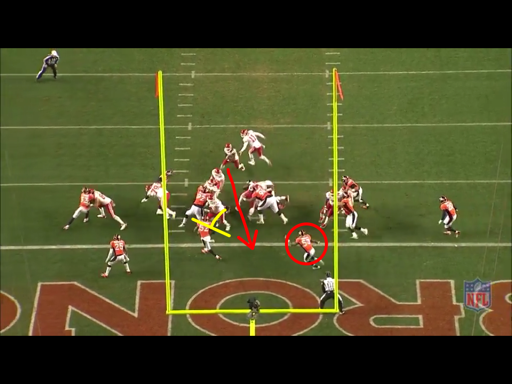 Unfortunately Fisher gets stood up, Miller beats Stephenson, Asamoah goes second level, Hudson and Allen are doing everything they can to hold off Vickerson with tough blocking angles. Sherman will end up having to take Von Miller and Charles will have to fit between a small running lane and beat the backside linebacker. The Chiefs are shutdown and have to settle for a field goal. 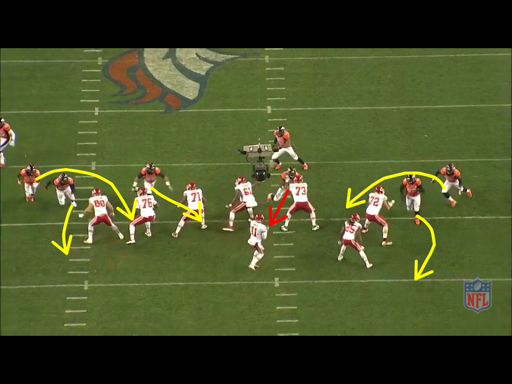 I anticipate the Broncos to throw a couple of stunts at the Chiefs when in obvious passing downs. What the Broncos did in the stunt above is attack what they perceived to be three weaknesses of the offensive line. They stacked the edges against Fisher and Albert, which forced Fasano and Charles to stay in to block and not allow them to help in the middle if a defender came free.

It also forced Asamoah into a one on one block. Hudson helped Allen on the play. Asamoah was left one on one and his man beat him to Alex Smith. It was an early sack in the game but an effective one. I fully expect Jack Del Rio to try one of these again. The only thing the Chiefs can do is study it, use proper technique and create a safety value pass on the play if all else fails.

In closing, the Chiefs offense just lacked execution in the game. They had some great plays called but receiver couldn't drop the passes. Some players needed to make the correct read on the play. They just need to execute better in round two and we could see a much closer football game.