With this week's Gameplan, we are going to change it up because the Kansas City Chiefs have already played the Denver Broncos. You know the names, faces and positions. This is the first time this season the Chiefs will play an opponent again. So what we'lll do this time around is show what needs to be tightened up from their first match-up. We will examine the defense first and the dreaded crossing route. 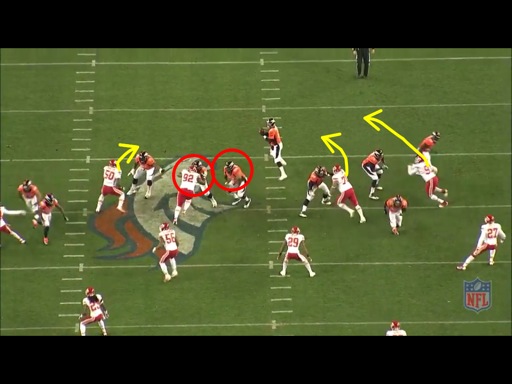 One of the biggest problems the Chiefs faced against Denver was the Broncos focus on Dontari Poe. Most plays the Broncos put two blockers on him. That limited their ability to put consistent pressure on Manning, who averaged around 2.5 seconds per throw. The only way you are getting to the quarterback consistently in that time is with a bull rush. Poe getting double-teamed negates that opportunity. The Chiefs need to flush Manning out of the pocket.

For round two, you need to send two players in 1 or 3-techs, consistently change it up. And you bull rush that pocket right into Manning's lap. The mission of that front four must be to make Manning uncomfortable.

2. Bringing the A gap blitz 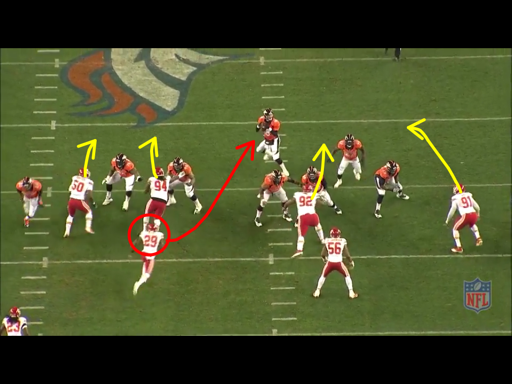 The Chiefs tried this a couple of times in the game and each time it was effective. They widened their rush lanes and they took advantage of the Poe double team and brought one of their fastest blitzers through the A-Gap in Eric Berry. With how quickly Manning gets the ball out, this is really one of the few blitzes you have in the playbook. You must come directly at him to force the throw you want. The first time Berry doesn't get him off his spot but Manning sees him and throws the ball quickly. The pass was incomplete, so the blitz was successful. 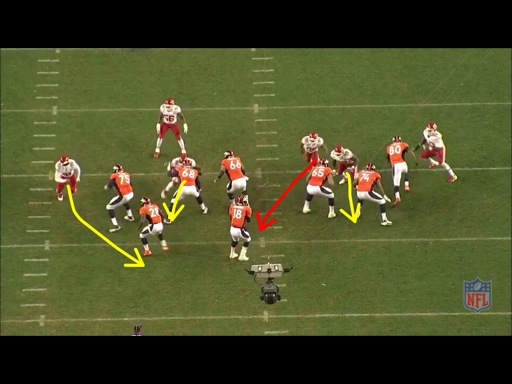 Above is the third time they ran the A gap blitz with Eric Berry. Two out of three times the guards / center doubled the two down linemen. Below shows how effective it can be. Manning's route hadn't developed when pressure was coming. So it shows where Manning's spot originally was with the X. And I highlighted how Manning is throwing off his back foot to simply not get hit. They may not have sacked him, but they disrupted his timing and forced the throw on their terms not his. 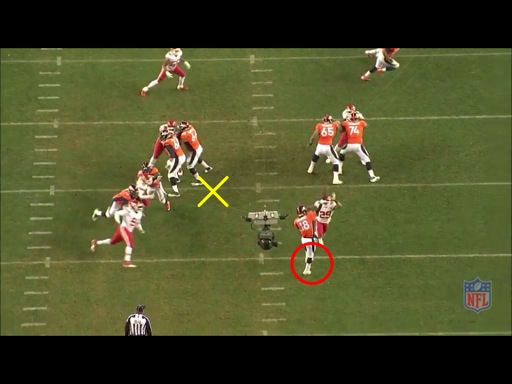 3. Bringing an end to the cross 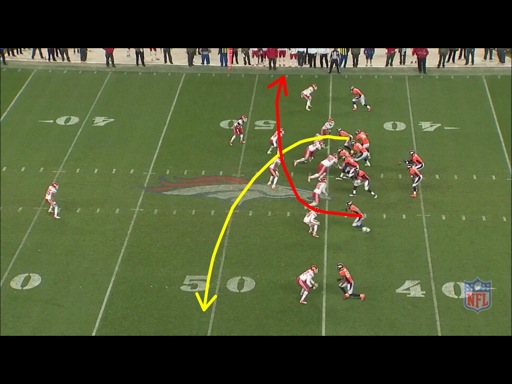 It has become a theme since the Cleveland Browns game. When the Chiefs are in obvious man coverage with a single safety high, use two crossing routes on opposite sides of the field against them. There are few consequences over the middle and it is an easy throw for the quarterback to make.

Some call it a mesh route. One crossing route "sets the rub", which forces their defender to follow behind in a trail position or run around on the outside of the pick. Either way the crosser has space to get the ball and turn up field with little concern. The plays have become more advanced since Cleveland. Denver and San Diego schemed some of the crosses like wide receiver screens. There are only two ways you stop this route from happening. 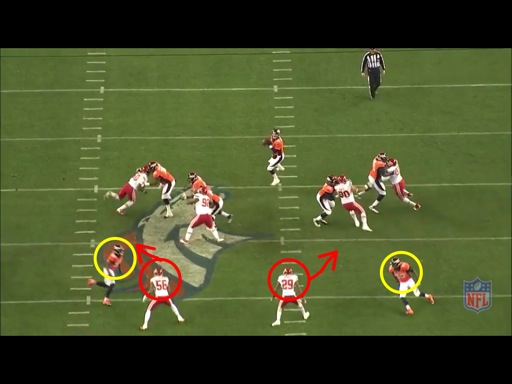 The first time the Broncos attempt it, the Chiefs should have their two most vicious hitters aligned over the middle. Once they see the cross on their side, take the receiver out. You lower the shoulder full strength into the cross. You put that message in the Broncos head: You will not be running any rub routes on us today. If you do, you risk the health of your receiver. You decide.

Now this may get a 15-yard penalty. I would much rather get a 15-yard penalty sending a message and setting the tone than to let a team think they can run that play on the defense again. Again, the message would be sent loud and clear to that offense on the field and to any future team watching the tape. That is a message that needs to be sent this week.

The other way to stop this is for the corners to align themselves on the inside of the receiver. Jam them at the line of scrimmage and disrupt the timing of the route. I prefer the message to start off. 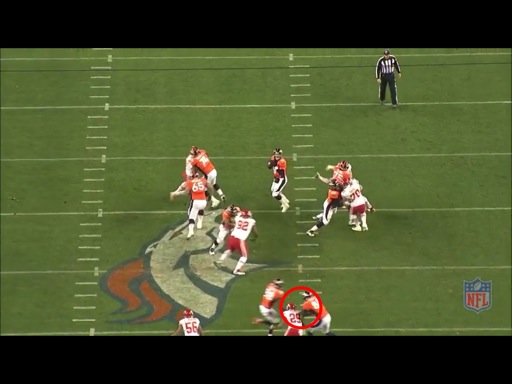 4. Eliminate the miscommunication and disguises 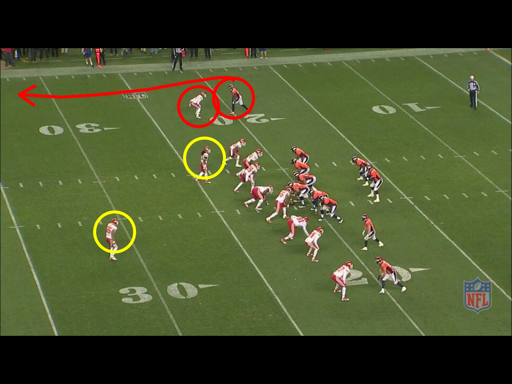 The Chiefs had two very big problems on one drive after the Anthony Sherman fumble.

First was no safety help over the top on a Demaryius Thomas vertical. Marcus Cooper gave an outside release like he had safety help over the top. The safety on that side of the field Kendrick Lewis was at the line of scrimmage. He continued to stay at the line of scrimmage while the ball was thrown over top. Obviously there is a miscommunication somewhere. Quintin Demps is covering his side of the field based on his alignment. He sees the ball thrown and attempts to run across the entire field to stop a touchdown. Demps was not at fault based on the alignments in pre-snap.

Now a couple of plays later on the Julius Thomas touchdown, Demps has an issue. He attempts to fake a safety blitz off the corner. He and Berry are aligned in a bracket. 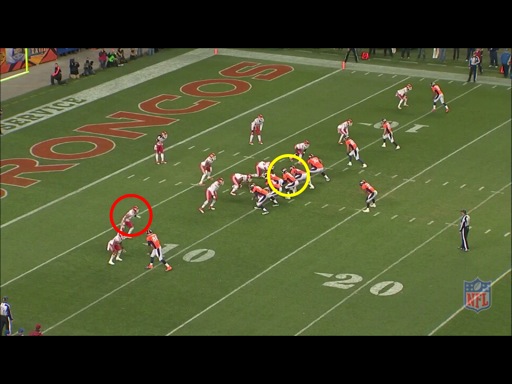 Berry takes away the outside and forces Thomas inside to Demps if needed. Demps goes in to fake a safety blitz off the corner and Manning sees it immediately and waits for the clearing. Thomas gets Berry to commit then cuts inside for his slant. Demps can't get back in time. Manning hits Thomas in stride for the TD. 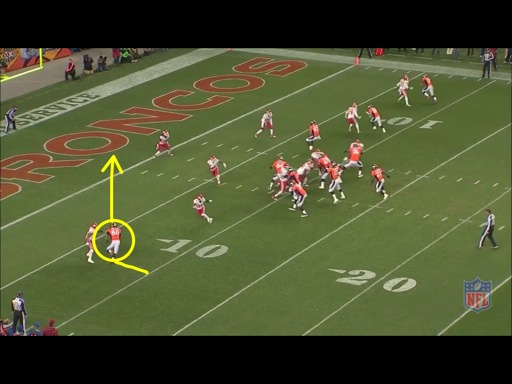 These are the four biggest issues I found in the Chiefs loss on defense. They're all correctable. The biggest challenge the Chiefs face is regaining that swagger. The defense has lost some of their swagger from early on in the year until now. They don't have the same attacking mentality. This football team needs to send a message on defense. They are coming to hit you in the mouth and take you out of your game every play. You are not going to stop them. You are not going to do what you please. You will take what they give you. They step the tempo not you.

This football team needs to send a message on defense.

That is the message this defense needs to send. Manning may burn them with the blitz. That's fine. If the corners jam their receivers at the line it will at least allow them a chance to get there. If Tamba Hali and Justin Houston don't play this week it is a great opportunity because it allows Bob Sutton to reinvent this defense.

To me, the defense seems to be getting predictable. Teams clearly know what they are going to do based on tape. They run the man coverage beaters against them. They know how to take away the pass rush. This is an opportunity to get creative and be unpredictable. It is time to put some fear back into the AFC West. Either way we will find out a lot about Bob Sutton and the defensive coaching staff this Sunday.

Later this week, we'll take a look at what the offense must correct in round two.