The KC Chiefs are facing their first real test of adversity after losing Sunday's game to the San Diego Chargers. Herbie Teope of ChiefsSpin.com recaps what Sunday's loss meant to the Chiefs.

Share All sharing options for: Adversity strikes: How will Kansas City Chiefs respond?

The Chiefs played the second half of Sunday's 41-38 loss to the San Diego Chargers without 20, which is the combined number of sacks between outside linebackers Justin Houston (11) and Tamba Hail (9).

While MRIs are pending on Houston (elbow) and Hali (ankle), the Chiefs didn't use their absence as a reason for the Week 12 defeat.

"We're not making excuses," Chiefs coach Andy Reid said during Sunday's postgame media session. "The next guys come in, and we expect them to step up and make plays. There's no excuse there."

It's a good thing, too, because the Chiefs have additional issues to concern themselves with.

More from Herbie on Chiefs-Chargers

The obvious is health, as the team managed to remain relatively healthy during a 9-0 start.

However, the Chiefs began Sunday's contest without right tackle Eric Fisher (shoulder), guard Jon Asamoah (shoulder) and defensive end Mike DeVito (knee). Their respective status, along with Houston and Hali, remains to be seen as the team shifts attention to Week 13.

The other unease surrounds a once stout defense against the pass suddenly being picked on the past two games.

Look for the ranking to drop yet again after Chargers quarterback Philip Rivers shredded the secondary for 392 yards.

So what happened Sunday?

The timeout: Right or wrong? 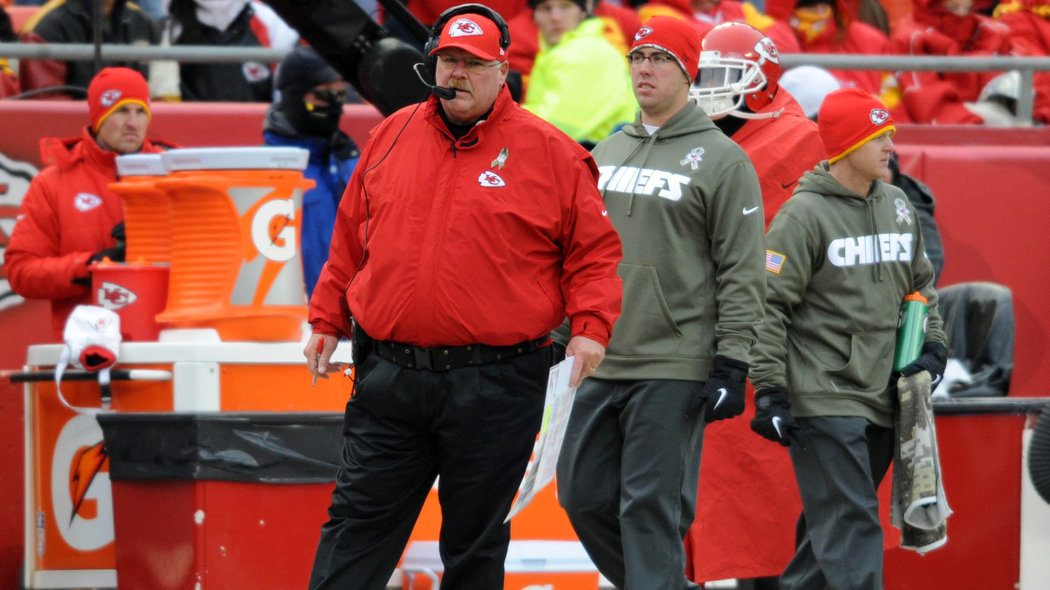 "They came out with a good game plan, a lot of crossing routes and a lot of pick routes," Chiefs cornerback Brandon Flowers said during Sunday's postgame locker room media session. "Too many big plays given up by us. We have to go back to the drawing board and handle that."

If the crossing routes sound familiar, they should because that's what the Broncos utilized in Week 11.

While Rivers complimented the Kansas City secondary during his postgame media session, he indicated the Chargers coaching staff devised a solid game plan.

It worked to exploit a weakness.

"Our staff did a heck of a job with the plan and creating some crossers," Rivers said. "And our guys did a great job of running after the catch."

As the saying goes, once is fluke, but twice or more is a habit.

The blueprint on how to attack the Chiefs has met with success in two straight weeks. And Chargers tight end Ladarius Green said the offense had confidence in the ability to attack during the game-winning drive.

"We knew that we could move the ball down the field and we know that we've got playmakers on this team," Green told reporters during San Diego's postgame locker room media session. "That's exactly what it showed."

Given the Chiefs' Week 13 opponent, it's reasonable to expect more of the same regardless if Houston or Hali are in the lineup.

"We knew that we could move the ball down the field and we know that we've got playmakers on this team." -Chargers TE Ladarius Green

Defensively, safety Eric Berry said players will need to step up in place of the team's sack leaders in the event of potential lost time.

"We just have to find a way to compensate for that," Berry said. "That's a big part of our defense; we put a lot on their shoulders. Now there is going to have to be a lot of players that have to step up and make plays in the back end and try to fill that hole."

As for the overall team mentality, kicker Ryan Succop said the team's character, which has been developed since the offseason, will play a role in how they handle the coming week with the Broncos on the horizon.

"We have a chance next Sunday to get another win and that's what this league is all about," Succop said. "It's not always going to be perfect, you're going to face adversity and really it's about how you respond to it."

Additionally, wide receiver Dexter McCluster said a large part of the response to the Chiefs' current woes will occur by returning to work in order to improve.

"We have to get back on path and we're going to work hard to get back there," McCluster said. "I just think adversity is good sometimes. We just got to come out of it."