The Kansas City Chiefs lost a heartbreaker to the San Diego Chargers on Sunday, 41-38. The Chiefs lost starters Tamba Hali and Justin Houston to injury in the first half yet stayed in the game to the point where Alex Smith's pass to Dwayne Bowe with 1:28 remaining gave Kansas City a 38-34 lead. However, the Chargers responded on the following drive with a 26-yard touchdown pass to Seyi Ajirotutu with just 24 seconds remaining, giving San DIego a 41-38 lead. The loss moves the Chiefs to 9-2 on the season while the Chargers are now 5-6. Read on for a drive-by-drive recap of the game. Post-game podcast is here.

On the first play, Alex Smith went deep(-ish) to Dwayne Bowe and drew a pass interference flag and picked up 15 yards.

On the second play, Alex mishandled the snap and fell on it.

Alex was sacked on 3rd-and-10 to end the drive.

Allen Bailey, filling in for injured Mike DeVito, lunges to get a piece of that ball. Awesome #backups

On 3rd-and-10, Philip Rivers was almost sacked and the ball was almost picked off. But Chargers WR Keenan Allen made the catch and the refs ruled him down just short of the first down. The play was challenged and the refs upheld the ruling.

Second straight drive Alex was sacked on third down. So frustrating

At least Jamaal Charles touched it on this drive. 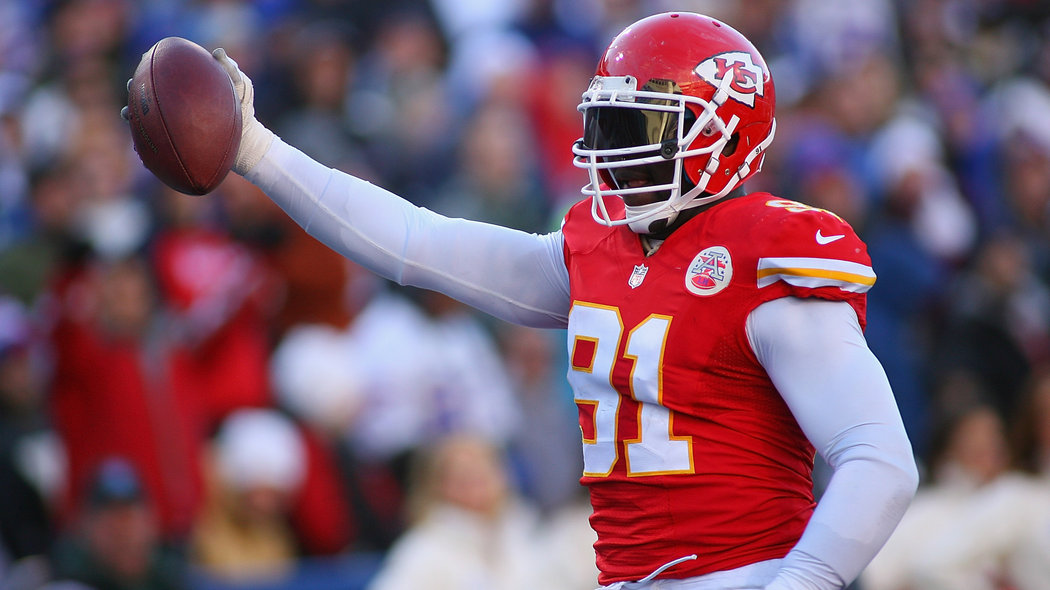 The Chargers are starting at their own 45-yard line.

Akeem Jordan doing his best DJ impression and bursting through the line to stop the runner on first down.

Marcus Cooper got picked by a Chargers WR which led to Rivers hitting Keenan Allen for 29 yards and pushed them into Chiefs territory.

Tamba Hali did a nice job of forcing Ryan Mathews out of the play and forced Rivers to look over the middle of the field on third down. THe Chargers were two yards short, which brought up a fourth down.

Was that DMC doing a little trash-talking? Looked like it at least. 17-yard gain for DMC

Chiefs picked up first downs on passes to DMC, Jamaal Charles and Dwayne Bowe. There they are getting their playmakers involved.

The Chiefs run defense is solid. They shut down a stretch play from the Chargers.

Marcus Cooper is being picked on. Keenan Allen hardly put a move on him and Cooper was off balance, which led to a San Diego first down on a 3rd-and-5.

Chiefs are going to need to make adjustments with Keenan Allen on 3rd down. They have gone to him every 3rd down.

Tamba is the Chief who is down. He is being helped off. Very concerning

Frank Zombo, replacing Tamba, got what appeared to be a sack on Rivers, but the refs ruled that he got the pass off. They forced a punt anyway.

The Chiefs ran the ball THREE TIMES IN A ROW. This is breaking news.

KC ended up having to punt after DMC fell on a third down pass. The Chiefs punted. 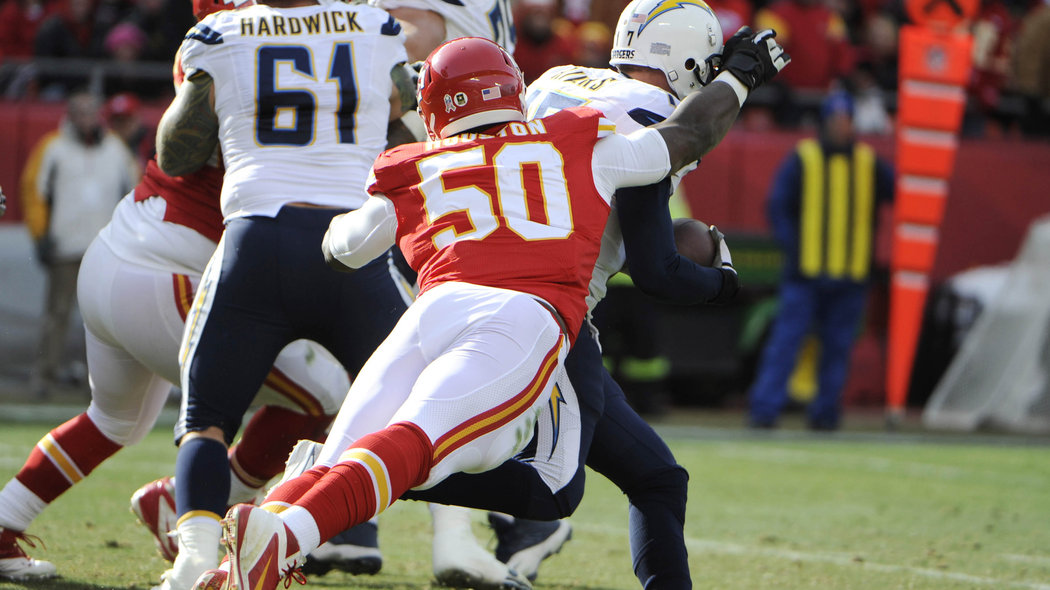 Justin Houston picked up a sack.

False start for the Chargers. The Arrowhead crowd is getting into it.

Alex found Avery again for 36 yards, pushing the Chiefs inside the 10-yard line.

SCORE: Jamaal punched it in from seven yards out on the next play. Chiefs lead, 14-3.

The Chargers have little problem moving the ball down the field with Rivers passes.

Rivers hits Danny Woodhead in the end zone for an 11-yard touchdown.

The Chiefs downed it with seconds left in the half.

Rivers hit Eddie Royal for a 54-yard gain. The Chiefs DB fell down on the play.

SCORE: Ryan Mathews punched it in from 1-yard out.

A nice return by Quintin Demps puts the Chiefs at the 39-yard line but a holding penalty brings it back to their own 15-yard line.

On 3rd-and-10, the Chargers screwed up and let Dwayne Bowe wide open. He picked up a 22-yard gain for the first down, a rare 3rd-and-long conversion.

That 3rd down was followed by a 16-yard pass to Anthony Fasano.

PI on the Chargers. Part of the reason throwing down field is worth it. Chiefs now in Chargers territory

The very next play, the Chargers got hit with a pass interference penalty again, which puts the Chiefs at the 2-yard line.

Jamaal dropped a pass on the goal line.

The Chargers got ANOTHER pass interference on Anthony Fasano in the goal line. 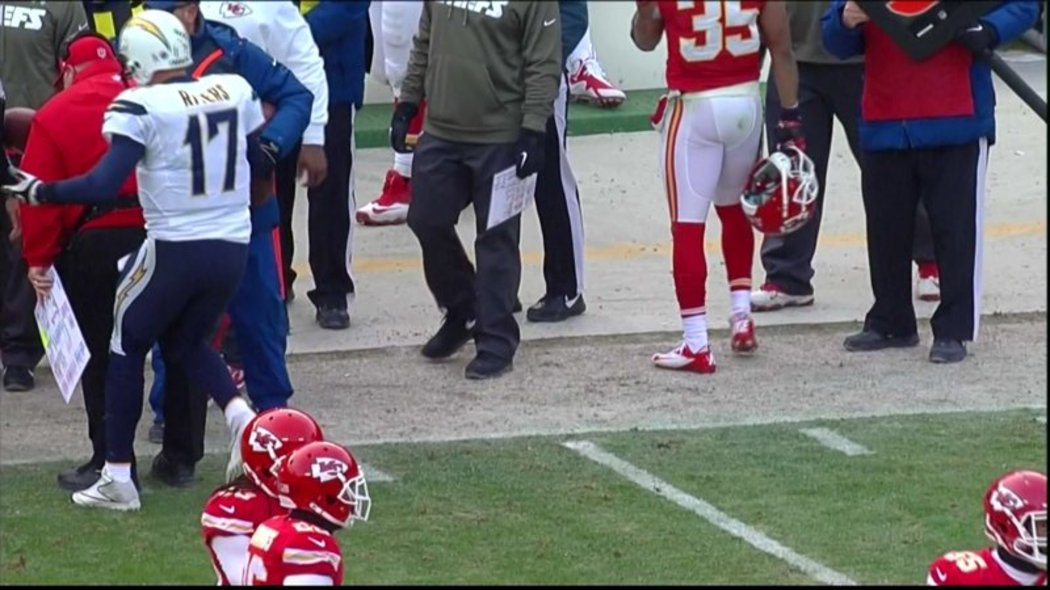 Ryan Succop kicked it out of bounds, giving the Chargers the ball at the 35-yard line.

The Chargers wiped off a 30-plus yard play with a penalty.

Kendrick Lewis limped off with an apparent injury.

San Diego will punt after going short on 3rd-and-15.

Alex's deep ball to Avery was tipped, which resulted in an interception. The Chargers returned it to the Chiefs 16-yard line.

Jamaal had a nice 14-yard run up the middle.

AJ Jenkins sighting! Wide open in the middle of the field. Chiefs at the 23-yard line. Hurrying up

Alex hit DMC for a 14-yard gain and got a flag out of it, moving the Chiefs inside the 10-yard line.

SCORE: Alex rolled out to his right and found an open Fasano for the 4-yard touchdown pass. Chiefs lead, 28-24.

The Chargers keep picking on Marcus Cooper on the crossing routes to Keenan Allen and Eddie Royal.

The Chiefs get bailed out with a holding call on the Chargers, pushing them back 10 yards while they were on the goal line.

SCORE: Demps made a nice pass break-up on third down (probably should've had the pick) which led to a Chargers FG. 28-27, Chiefs.

It's the fourth quarter so the Chiefs must be running the ball.

After running for 10 yards, Jamaal busted off a 46-yard run to put the ball on the 8-yard line.

Chiefs start on the 35-yard line after another nice return from Quintin Demps, who was tackled by kicker Nick Novak.

KC can't do anything and has to punt it back with less than six minutes left.

San Diego has to punt it after a 3-and-out.

Alex hit Jamaal for 19 yards on a screen pass.

SCORE: San Diego moved the ball right down the field with Philip Rivers hitting his WR for a 26-yard touchdown pass with 24 seconds left.

Chiefs DB so close but yet so far away pic.twitter.com/GAuKJCAE8v

Chiefs pass to Donnie Avery for 11 yards, which took 8 seconds.