Chiefs vs. Broncos: The best and the worst

@HisDirknesS recaps the Chiefs 27-17 defeat to the Broncos with the best and worst moments of the week.

Share All sharing options for: Chiefs vs. Broncos: The best and the worst

I'm not sure anything has changed.

(Other than my dreams of being the worst 19-0 team ever, of course.)

I still look at Denver as the best team in the AFC (neck and neck with Seattle for NFL supremacy).

And I still look at Kansas City as the 2nd or 3rd best team in the AFC (neck and neck with New England; Indy not the same since Reggie Wayne's injury).

The AFC West, along with the rest of the AFC, still goes through Arrowhead Stadium.

To be the best, you've got to split with the best ... and not blow any other games along the way ... especially within the division ... or if you do, hope that the best also drops a game somewhere. -Professor George Feeny

Now there's a quote to live and die by.

Best "Game Manager" in the NFL - Peyton Manning (obviously, saving this term for QBs who aren't very good doesn't make sense to me). He had complete control over this entire game, especially once Denver got out to a 10-0 lead. He knew the Chiefs offense is limited and their defense thrives off sacks and turnovers. Once that two-score lead was in place, he just sat back, took very few chances, and let the game play out. This was my biggest fear going into the game.

Worst plays of the game - Anthony Sherman's fumble, Demaryius Thomas' 70 yard reception, and Donnie Avery's drop. The three plays most responsible for the 10-0 Broncos lead, the biggest factor in this game.

Worst part about Donnie Avery's drop - He might've scored a TD had he caught it. It's tough to tell for sure, but I think the safety whiffs on him, and takes out his fellow DB in the process. If Donnie, Who Loved Bowling has the wherewithal to get up and run, I think he scores. But, you gotta crawl before you can walk.

Worst narrative - The Chiefs couldn't get to Peyton Manning. They got there (I counted eight pressures). Peyton just got rid of it every time they did, either grounding it at a receiver's feet or getting a completion off just in time. He seemed to know exactly where his receivers, and more importantly, where the defenders were on every occasion. To win in two weeks, the Chiefs defense has to do a better job of confusing him with their coverage schemes, forcing him into either taking a few sacks or throwing a pick.

Worst strategy to beat Peyton Manning - Don't hit him. The Chiefs could've hit Peyton twice. Hard. They didn't either time (Berry once, Tamba another). Maybe Bill Maas isn't crazy after all? I went so far in the opposite direction that I was predicting we'd see a roughing the passer penalty in the 1st quarter. This (lack of) aggression will not stand, man.

Best Broncos jokes I've got, because I've been praising them too much thus far, and screw 'em -

1. They sold out and their stadium is no longer named Mile High

2. The In-Com-Plete chant is worse than experiencing slow internet while in a traffic jam on a hot day with no AC

4. Eric Decker probably complains about getting the wrong bottled water at a restaurant ("I wanted Perrier, god!")

5. Something called Dude, I Eat Nachos drew a 15 yard penalty for taunting

Best hope for the rematch - Arrowhead crowd. Everything came much too easy for the Broncos offense on Sunday night in the comforts of their own abode. I don't suspect it'll be that easy for Peyton to orchestrate at 137.5 decibels.

Worst quarter of the season - Jamaal Charles, 1st quarter. He lined up wrong on two of the first three plays. He dropped two passes, both of which would've been a TD. A negative run. And he had no idea that Sherman fumbled the ball right by him (probably couldn't have gotten it). So what's this mean? Possible deer in the headlights situation (in which case, it'd be best for him to get over that now). But most likely, nothing. Ground Chuck is still the man.

Best rivalry - Brandon Flowers and Wes Welker. This one was fun. Woofin' at each other all game long. Not to mention, Flowers needlessly hitting Welker on about 5 different running plays (collectively my favorite plays of the game). While Welker got the best of Flowers on two plays, B-Flow still wins this bout by split decision.

Best effort - Wes Welker recovering his own fumble in a vegetative state. I watched this five times and still have no idea how he gathers it back in the pile. If DJ had come up with it, Andy would've won this challenge. Was still a 14 point game, early in the 4th at this point. One of those missed opportunities.

Worst sequence - Marcus Cooper. After getting roasted by Demaryius for 70 yards, Coop gets beat again on the first play of the next possession and then appears to get pulled from the game (saw no sign of injury). This is what led to that "Hey, Sanders Commings is playing!" play. His first play back in, he gets beat again by Demaryius, slips and falls and gives up 29 yards. Two plays later, he's flagged for holding on Welker. Peyton was so focused on picking on Cooper at this point, that he missed a wide open Decker in the end zone. MC31 definitely had a rough night, but in fairness, how he's performed up until this point has been more surprising than getting picked apart by Peyton Manning. 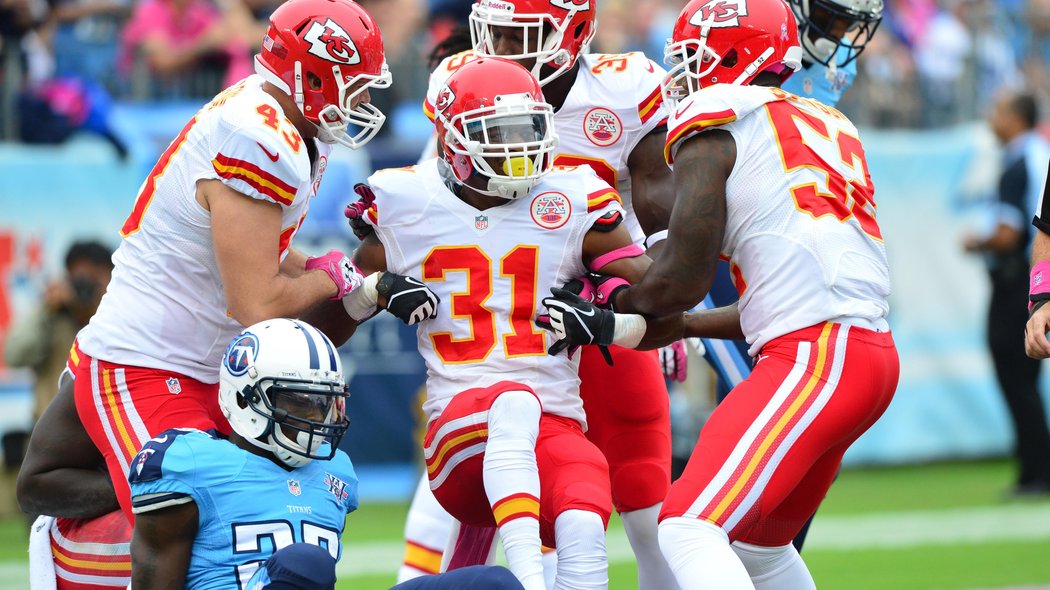 Worst call of the night - There were some bad ones (Flowers PI on Welker at the 1, the taunting flag, Bowe held on a shallow drag on 3rd in the 3rd) but this one's the worst. Here, watch this. God Jam appears to get to the 1/2 yard line, yet the ball gets spotted outside the 2 for the FG! This makes all the difference in the world between going for it on 4th and goal and kicking the FG. You've gotta wonder if Andy would've gone for it had the ball been spotted correctly.

Worst coaching decision - Punting on 4th and 7 at the Denver 41, with 12 minutes left, down 14. And then Colquitt puts it in the end zone to top it off. Game over. I hated this even more than the damn in-com-plete chant.

Best coaching decision - Andy Reid calling timeout on defense with 35 seconds left in the first half following a 3rd down stop. A move that very easily could've resulted in 3 points for KC had Alex not taken a god awful sack.

Worst decision from Alex - 2nd and 17. Jamaal motions up top followed by LB Trevathan, who he immediately blows by on a fly route. But Alex never even looks his way, opting to spike the ball at McCluster's feet on a 3 yard slant. Oy vey.

Best offensive game of the season - ...? I really don't know. The Eagles game, I guess? So we either haven't seen this offense's ceiling yet, or we're staring it directly in the face. I'm not sure which of these answers is more concerning.

We either haven't seen this offense's ceiling yet, or we're staring it directly in the face.

Best sign that Brad Childress is alive - They showed him on TV. And he was almost half awake!

Best catch of the season - Dexter McCluster along the sideline at the very end. Backshoulder, full extension stab, with a foot drag? I think I ordered that at a bar once.

Best player for Chiefs - Justin Houston. I know this sounds weird, given the lack of sacks. But Fiddy Sack made some great plays in the running game, batted down a pass, and yes, even pressured Peyton a few times.

Worst time to slip up - San Diego. If the Chiefs and Broncos finish tied atop the AFC West standings, the first tiebreaker is divisional record (assuming they split their 2 games). It's hard to imagine Denver losing in the division after already winning in San Diego, which means if the Chiefs lose this one, they are no longer masters of their domain. This game terrifies me. Go Chiefs.

I'm so glad I didn't have to listen to Scott Pioli at halftime,