It's time for our weekly Q&A with the opposing blog. Up today: Buffalo Rumblings, which happens to be one of my favorite SB Nation blogs, mostly because the editor Brian and I both know what it's like to root for a bad team. My Q&A with Brian can be seen below. More stuff to read: 5 questions with AP | Which Chief would you take? | Which Bill would you take?

Share All sharing options for: Chiefs vs. Bills 2013: 5 questions with the enemy

1. Name one player on offense the Chiefs need to watch out for.

Buffalo's offense is not functioning particularly well with EJ Manuel out of the lineup and C.J. Spiller hobbled, but: Scott Chandler is worth mentioning. In his last two games against the Chiefs, Chandler has a combined seven catches for 116 yards and three touchdowns. He also has a pretty good rapport with backup quarterback Thad Lewis, coming off a seven-catch effort in New Orleans.

2. Name one player on defense the Chiefs need to watch out for.

The Bills are better defensively than the numbers indicate, so it's hard to pick just one guy. I'll go with rookie nickel cornerback Nickell Robey, an undrafted free agent out of USC. He's only 5'7", but the Bills love him and he's playing at a pretty high level - he covers screen passes well, blitzes out of the slot and is around the ball a lot. You'll see No. 37 a lot on Sunday.

3. The Bills will be rolling with a backup QB (No. 2 or No. 3) ... what kind of numbers will that QB have if the Bills win the game? Where will they succeed? 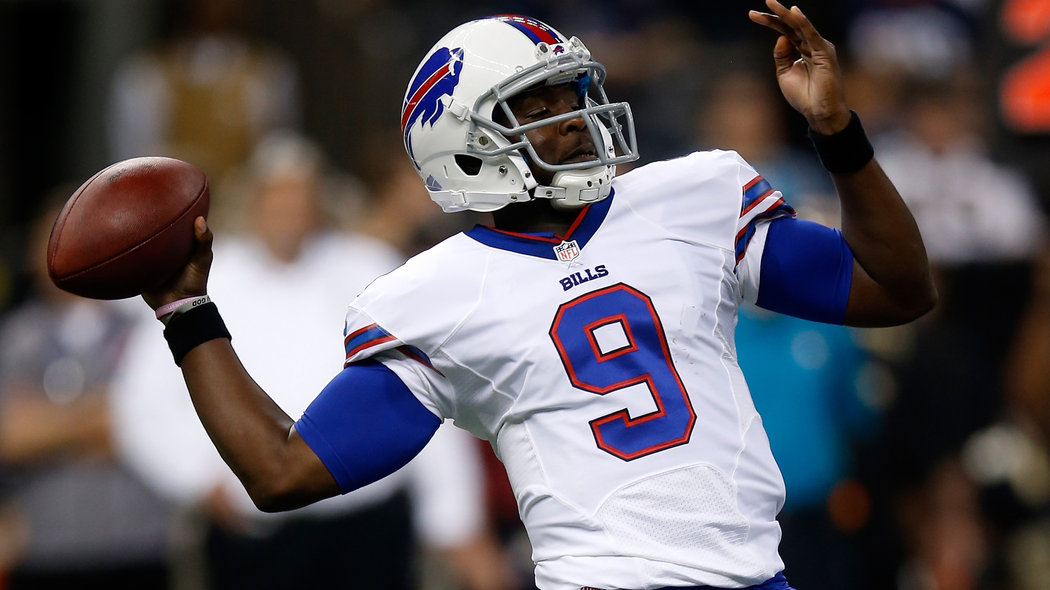 The Buffalo Bills still don't know who will be starting at quarterback when they take on the Kansas City Chiefs this Sunday.

Let's see... the Bills tried to re-sign Ryan Fitzpatrick before cutting him. They drafted EJ Manuel, cut Tarvaris Jackson, signed Kevin Kolb and Jeff Tuel, then signed Matt Leinart before trading for Lewis. That makes Lewis option number seven this year, quite frankly. He's a tough guy and has a really strong arm, and he can throw a pretty deep ball. He also takes a ton of sacks, fumbles the football with alarming frequency and misses a lot of fairly easy throws. If the Bills win with Lewis at the helm, it's because their defense is making plays, the run game is clicking and Lewis is simply taking what the defense gives him.

4. The Chiefs defense loves to create turnovers. How are the Bills at protecting the football?

They've turned the football over at least once in seven of eight games this year, and at least twice in four of eight. Lewis struggles with ball security when under duress, and is also known to occasionally sail passes over the heads of his intended receivers, which finally led to a pick in New Orleans. Clearly, Buffalo will need to be especially wary of turning the football over against a Chiefs team that, as you rightly point out, survives and thrives on that facet of the game.

5. What's your prediction on the game?

I promise you, I was all set to pick the Bills this week. Then this whole Thad Lewis thing went down, with him missing practice Wednesday and Thursday, and throwing the quarterback situation into chaos. I do believe Lewis will ultimately suit up, but how effective can a player of his caliber and experience be against a defense like Kansas City's on limited practice time? Add in the fact that C.J. Spiller may again be limited if he plays, and it's tough to see the Bills having enough in the tank to pull an upset. That said, the Bills are a tough out, and I expect this to be a hard-fought contest either way. Chiefs 23, Bills 17