Chiefs vs. Broncos 2013: 5 questions with the enemy

It's time for our weekly Q&A with the enemy. This week it's Kyle over at SB Nation's Denver Broncos blog, Mile High Report. I asked Kyle five questions on Peyton Manning, Denver's o-line injuries, the best defense they have faced, where their defense is vulnerable and the Von Miller impact. Read on for our Q&A and visit Mile High Report for more on the Broncos ahead of Sunday night's game against the Kansas City Chiefs.

Share All sharing options for: Chiefs vs. Broncos 2013: 5 questions with the enemy

1. Peyton Manning is hurt. How will this affect his mobility in the game? Does it concern you?

MHR: Yes, Manning's injury concerns me, if only because it turned him from "superhuman" to "really good human" on the football field. He's throwing for 10 percent less yards since the Week 6 injury; his passing average has dropped from the 9-11 yard range to the 7-9 yard range; he's throwing for about a touchdown less per game and is turning the football over a lot more than he was pre-injury (which was never -- one interception in Weeks 1-5, five interceptions in Weeks 6-10).

All that being said, he's still tops in the NFL this season, even over the weeks since his injury. His mobility against the Chiefs pass rush concerns me, but his ability to stand in the pocket and find an open man does not. I think more is being said of Manning being hurt than is merited. He'll be just fine.

2. Run through the history of the Broncos o-line this season. Who got hurt and who is playing where now?

Left tackle. The biggest story is All-Pro left tackle Ryan Clady's Lisfranc foot sprain that put him on Injured Reserve. Chris Clark, an undrafted player who has been with the Broncos since 2010, has filled in his spot and done a fair job.

Center. At center, starter J.D. Walton had offseason ankle surgery and was placed on the PUP list. The Broncos tried to replace him with Dan Koppen, who played in his place last year, but Koppen suffered an ACL tear in training camp. Insert Manny Ramirez, who had never played center at the pro level, but who has done a very nice job this season (even being named 2nd Team PFF Midseason All-Pro).

Right guard. At right guard, the Broncos signed Louis Vasquez in free agency, and he's been Denver's best lineman this season; he replaces Chris Kuper, who has been dealing with injuries since the last game of the 2011 season (vs. Kansas City). Perhaps most interesting, just in the last month, Walton and Kuper are both now healthy and listed as full participants in practice -- yet the Broncos have given no indication that either Walton or Vasquez's jobs are in danger. I guess you can lose your job to injury in the NFL.

3. Who is the best defense the Broncos have faced this season and why were they so effective against Denver? 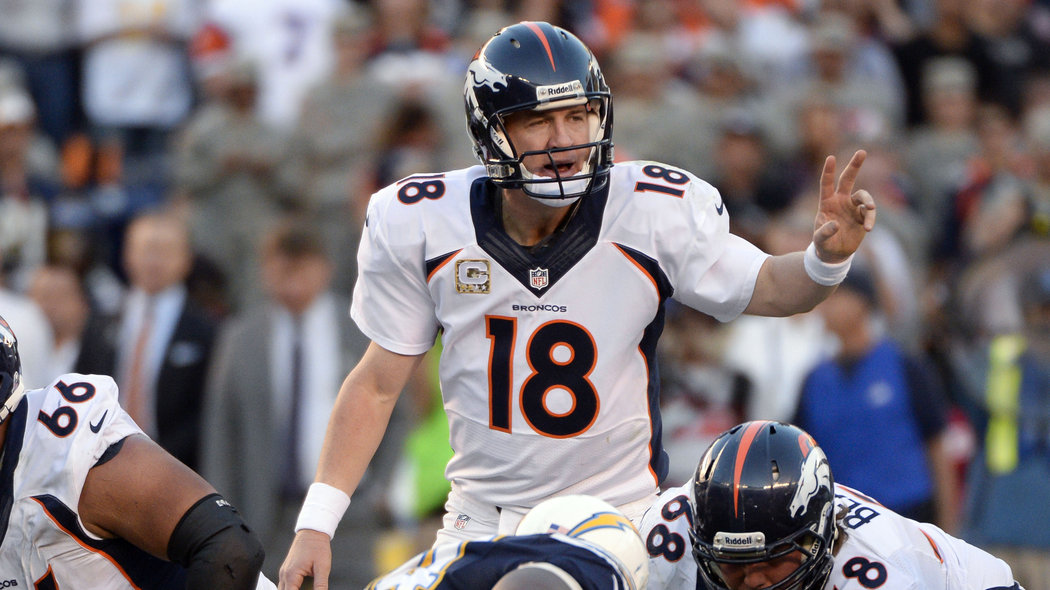 After looking at every play from their last three games, it's obvious how to corral the Broncos.

MHR: Statistically, the defending Super Bowl champion Baltimore Ravens in Week 1 have proven to be the toughest defense the Broncos have faced, and Peyton Manning tore them apart with 7 passing touchdowns (49 points). No on else has scored 27 on the Ravens this season. Simply put, the Broncos were at a huge advantage because they had two new weapons no one had seen on any meaningful film yet: Julius Thomas and Wes Welker.

But let's throw statistics out the window and look at film. Denver's toughest opposing defense was the San Diego Chargers a week ago.

The Broncos were limited to only 28 points against the Chargers because San Diego was able to get after Peyton Manning in the second half. Normally, teams that face the Broncos wear out by the 4th quarter, but that wasn't the case with the Chargers. They pressured Peyton Manning late in the game and changed their defense enough where Denver's normal second-half adjustments were neutralized. The Broncos were limited to only 7 second-half points, and those came on their first drive -- the Chargers shut them out for nearly the entire second half by keeping steady pressure and not wearing out in the secondary.

4. Where is Denver's defense vulnerable? Where would you attack them if you were the Chiefs?

MHR: Denver's defense is underrated; there are some stats floating around the Twitter-verse saying that the Broncos' defense has performed better than the Chiefs' defense over the last three weeks in a lot of significant categories.

Facing off against rookie Eric Fisher, Von Miller will be licking his chops.

The return of Von Miller is the big reason why the defense looks good of late, so if I were attacking the Broncos defense, I would attack in any direction away from Von Miller. He is phenomenal at making plays behind the line of scrimmage for a loss, and he's just as phenomenal in closing running lanes. If you're running, run away from Miller as much as possible. If you're passing, be ready to double-team him.

5. Does Von Miller move around the line a lot? What do you think about him facing a rookie who has struggled in Eric Fisher?

MHR: Miller will play strong side linebacker against the right side of the offensive line but also put his hand on the ground in nickel packages; he's been doing that since his rookie year in 2011. I expect him to face Eric Fisher early and often.

Yes, he will move around. He'll even drop back into coverage from time to time in zone looks (something he practiced at length in training camp). But he's at his best when he's able to pin his ears back and get after the quarterback. Facing off against a rookie like Fisher, he'll be licking his chops.