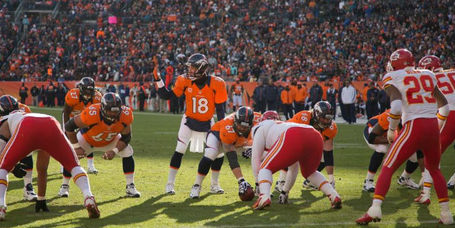 Many have tried, many have failed. Over the years, a number of defensive coordinators have stayed up late brainstorming for ways to hold off a Peyton Manning lead offense, but only few have been successful. If I had a dollar for every defensive coordinator who couldn’t stop… well… you know the rest.

Although unbeaten, in the eyes of many of the NFL’s "experts", the 9-0 Chiefs are nothing but a product of luck and a weak schedule. That’s what makes their matchup with the Broncos the ideal "statement game" that this team needs. There is first place in the division, a possible first round bye, and league wide respect on the line, which is why Kansas City needs to avoid being just another bump in the road for Peyton Manning.

As Bob Sutton watches and learns from the defenses that have been successful in stopping Peyton, it must be clear to him that the only way the Chiefs are capable of keeping Manning from making them look silly, is if they get under his skin.

Hit him. Make sure he knows you’re coming. Make sure he knows that his blindside is not safe without Ryan Clady. Make him think about how he’ll avoid the rush with his two injured ankles. Give him looks he’s unfamiliar with. Do anything and everything in your power to get Peyton Manning out of his comfort zone.

Denver’s making a living off of torching defenses with their passing game and sending them away in their misery with their running game, so make no mistake. The Broncos offense is far from one dimensional. There are multiple parts of the offense to stop which only makes KC’s job tougher. 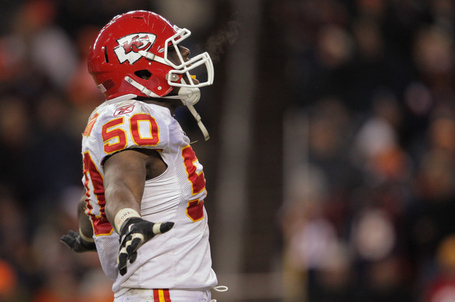 Denver’s offensive minds will not be blind to the fact that they have an immobilized, injured Quarterback in the pocket. They’ll develop plays and formations where Manning can get the ball out early without having to deal with pressure. The issues with doing that, is that eventually the ball will need to be thrown downfield. Kansas City’s defense has little flaws, and are a strong tackling team. It’s clear that quick five to ten yard throws is not going to win you too many games vs. tough teams. (Something that Alex Smith should learn sooner rather than later.)

After watching the way Peyton Manning reacted to pressure while nursing his injured ankles vs. San Diego, it’s clear that he will have issues with opposing defenses that have a strong pass rush. Lucky for Kansas City, they lead the league in sacks and no doubt have the most fierce front seven in the game. Tamba Hali, Justin Houston, and Dontari Poe need to zero in on Manning, and do everything they can to get their hands on him. Big number 18 has always been a smooth operator when avoiding pressure with one step this way, one step that way and getting the pass off. But with two injured ankles and a high ankle sprain, he won’t be fooling anybodywhen he says he’s ready to play. If the pressure surrounds Manning and receivers aren’t open, he’ll run out of options very quickly.

Something that we haven’t seen from Kansas City’s defense in a long while, is Justin Houston and Tamba Hali rushing from the same side of the line. If Tamba and Houston can both line up on the left side, the weaker side of Denver’s line which is also Manning’s blindside, the prospects of them hitting number 18 definitely increases. Dontari Poe will also be a huge factor Sunday Night as well. Manning won’t be moving around in the pocket too much, and if Poe can get the best of his matchup once or twice and bring some pressure straight up the middle, Manning will be forced to get the ball out early, or take the sack. Either of these plays is definitely a plus when going up against such a potent, explosive offense.

Denver’s ability to keep defense off balance with the run game may be surprising to some, due to all the hype and talk of Denver’s pass game. But Knowshon Moreno has been having a very quality year despite an underwhelming stat line. Kansas City will need to stay disciplined when blitzing Manning on what may seem like passing downs, because Denver calls a good amount of draws and delayed runs, for good reason. Teams pay so much attention to the potent passing game, that they forget about the quality run game the Broncos possess.

All and all, what Kansas City needs to focus on most is hitting number 18, and disrupting his timing. If they can be successful with that, their prospects of going home on their post game flight with a W drastically increases. I’d like to think that many would agree that you’d much rather take your chances on getting gashed by Denver’s running game, and focus specifically on getting to Peyton.

The outcome of Sunday Night’s showdown is still in question. But one thing is for certain: This is going to be a great game. Although the homer-ism inside of me has blinded my perspective on the outcome, I've got the Chiefs leaving Denver with a big W, in a 27-24 victory.