Pressing Peyton Manning: How the KC Chiefs D can attack the Broncos

After looking at every play from their last three games, it's obvious how to corral the Broncos.

Share All sharing options for: Pressing Peyton Manning: How the KC Chiefs D can attack the Broncos

The Denver Broncos have a great offense.

This season, Denver has averaged 459 total yards, 353 passing yards and  41.2 points per game, all tops in the National Football League. Peyton Manning, a future first-ballot Hall of Fame quarterback, has thrown for 3,249 yards and 33 touchdowns, also leading the league.

The stats go on forever, proving Manning and his offense is one of the most prolific the game of football has ever seen. Still, there are always ways to stop teams and the things they do best. 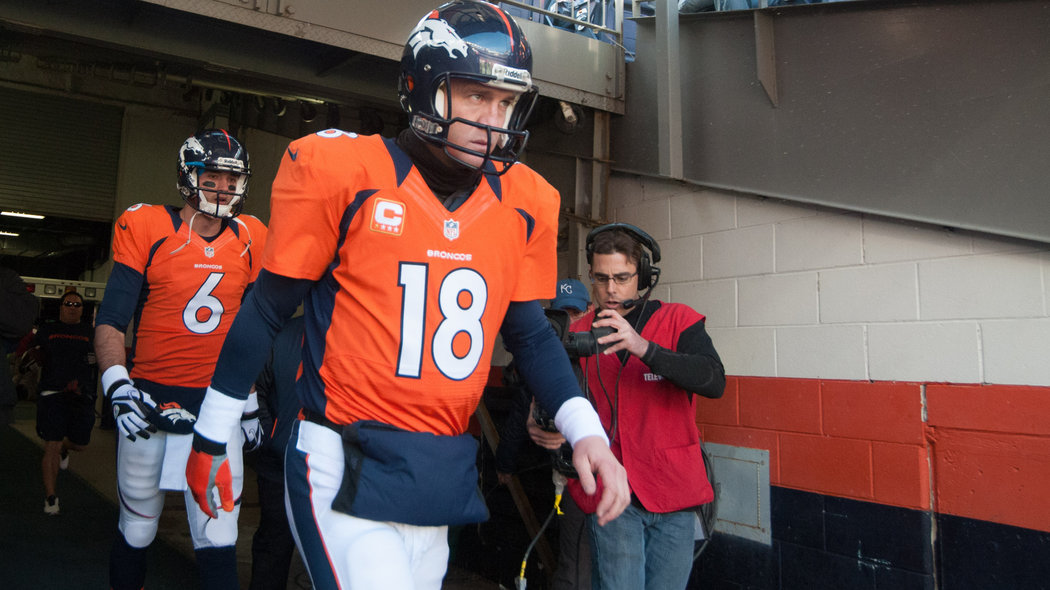 Nick Jacobs picked out Peyton Manning's touchdown routes to determine what the Broncos like to do on offense.

This game is no different. The Kansas City Chiefs bring the best scoring defense into this highly-anticipated contest. More importantly, the Chiefs are perfectly built to beat Denver with three terrific cornerbacks and a dynamite front seven, including the best pass rush around.

Now, talk is cheap. I turned on the film and charted every play from the Broncos' last three games. Of course, those are a loss to the Indianapolis Colts, and wins over the Washington Redskins and San Diego Chargers. Here is what I found:

In this game, Denver ran 67 offensive plays (not including plays ending in penalties) before its final series, which I discounted because Indianapolis was in a strict prevent defense.

In those 67 plays, the Broncos ran the ball 19 times while calling a pass play 48 times. The results were three sacks, one interception and a safety, along with the Colts committing two penalties on defense. Manning finished the game with 386 yards and three touchdowns, but could not earn the victory.

Why? Very simple. Indianapolis forced Manning to throw the ball over the top of its defense.

In this game, the Colts defensive coordinator challenged Manning with a ton of press coverage. In fact, Manning faced press coverage 41 times in 67 plays, or 61.2 percent of the time. Nine times, the Colts employed an off-man style (13.4 percent). Another 16 times, Indianapolis had a combo (man and zone) coverage (23.9 percent).

Only ONE TIME did Manusky call a strict zone defense. Guess what? It went for an Eric Decker touchdown in the first quarter. The Chiefs ex-linebacker wised up and never called it again.

By playing this defense, Manusky and the Colts took away Manning's comfort zone. They jammed Denver's receivers and forced the ball to be thrown downfield. Manning took advantage, completing 7 of 14 yards including a touchdown on throws in the air over 15 yards. However, it also resulted in Manning being pummeled by Robert Mathis and co.

Only ONE TIME did Manusky call a strict zone defense. Guess what? It went for an Eric Decker TD.

Manning threw for 353 yards before Denver's final garbage-time drive. Of those yards, 248 came in the air (from here on known as YIA - yards in air). In other words, 70.2 percent of Manning's passing yardage came before his the receivers were able to make a play. Indianapolis wrapped up and tackled, not allowing a constant trickle of easy yardage.

Bottom line, the Colts made the Broncos earn yardage. They forced Manning to sit in the pocket and wait for developments down the field. Manning averaged 8.55 YIA per completion, a high number on the surface but exactly what an opponent wants. Force the throw, hit the quarterback, make the tackle.

Now, take a look how that contrasts to the Washington and San Diego games:

In this game, Denver ran 76 plays on offense, not including four kneel-downs.

Out of those 76 plays, the Broncos ran the ball 30 times and had a designed 46 pass attempts. The results were three interceptions, a lost fumble and a pair of sacks. However, the Redskins were soundly defeated, largely on their own errors.

Overall, the Redskins played press 57.9 percent of the snaps, along with combo (11.8 percent), off-man at (10.5 percent) and zone at (19.7 percent). Notice the huge difference? Tons of zone from the Redskins. For some reason, defensive coordinator Jim Haslett fell in love with zone and soft man coverage in the second half, calling those defenses on 22 of the 47 snaps.

Washington forced four turnovers in this game, and guess what? All four were on plays when press coverage was employed.

Washington forced four turnovers in this game, and guess what? All four were on plays when press coverage was employed. The Redskins also gave up two touchdowns on plays of 35 yards. The defenses? Zone and off-man.

Now, Washington still played a good amount of press coverage, but the big difference was tackling. If you recall from earlier in the piece, Denver only gained 29.8 percent of its yardage after the catch against the Colts. Try this comparison on for size: Against the Redskins, the Broncos amassed 238 of its 354 passing yards AFTER the catch.

That number comes out to 67 percent of its total, almost a complete 180 from the Indianapolis game. Manning threw the ball 44 times against Washington, and his average completion travel in the air? 3.87 yards. Much shorter than against the Colts. Manning was also 0-for-7 against the Redskins on passes traveling in the air over 15 yards with two interceptions, but it did not matter. Poor coverage and atrocious tackling doomed Washington.

Of those 56 plays, 20 were runs and 38 were designed pass attempts. The results were two sacks, one lost fumble and no interceptions. Manning's line in the game was 25 of 36 for 330 yards and four touchdowns.

Despite seeing the merits of the playing press coverage against Denver, head coach Mike McCoy decided to back off the line and give up the underneath throws. McCoy gambled on a bend don't break style, relying on his secondary to limit the receivers once they caught the ball. It was a disaster.

By the way, the one sack that turned into a fumble and turnover in the Broncos' red zone, came on a play when San Diego jammed the receivers. Stunning.

The numbers don't even dictate how bad it could have been. Denver basically tried to nurse its lead late, running on first and second down almost every possession of the second half.

Again, the Chargers were trying to keep everything in front of them, allowing for the secondary and linebackers to come up and make quick stops. The results? Of Manning's 330 yards, a measly 126 came with the ball in flight, meaning 61.8 percent of the yardage came after the catch. Two of the touchdowns scored by Denver came on throws of four yards and minus-three yards, which ended respectively in 74 and 34-yard jaunts.

Hopefully this gives everybody here an idea of exactly what needs to be done by the Chiefs on Sunday.

The Chiefs can do exactly what the Colts did, except with two pass rushers off the edge and much better cover corners. Indianapolis gave up 33 points. I don't expect that many to be scored on the Chiefs. In fact, I would be stunned.

Is it Sunday yet?