Bucking the Bronco: 4 ways the Chiefs can sack Peyton Manning

It is one of the most important questions among Kansas City Chiefs fans right now: How do you get to Peyton Manning? After going over some of the Denver Broncos games, here is what I was able to find.

Share All sharing options for: Bucking the Bronco: 4 ways the Chiefs can sack Peyton Manning

Peyton Manning is a rhythm quarterback. The Broncos offense is all about timing. You must disrupt the routes of the receivers and make Manning uncomfortable in the pocket. The way you can tell it is successful, if Manning starts getting happy feet in the pocket. Each time he does that, his timing has been disrupted and he wants to get rid of the ball. On a majority of plays, Manning has the ball out in four seconds. If you disrupt the timing of the routes, you buy an extra second. 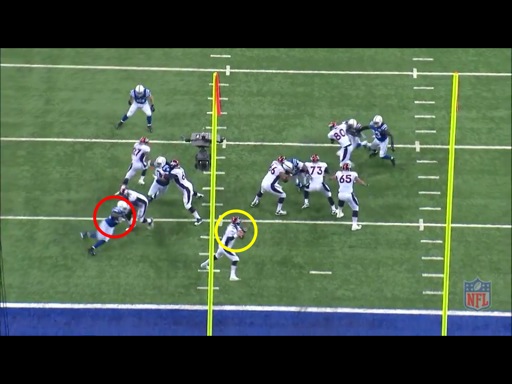 Robert Mathis was able to successfully perform this in the Sunday Night Football game where the Colts beat the Broncos. Mathis was able to beat the left tackle to the corner. All Mathis did was use his speed, he then used a dip and rip move to make sure the tackle couldn't hold him. Then he put his face mask into the back of Manning's neck and shoulder blade area. It was a huge play that turned the tide of that game. The sack took four seconds. 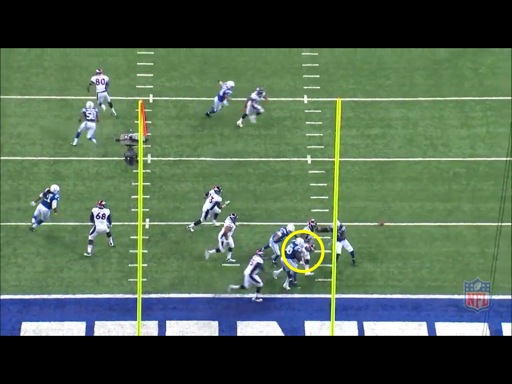 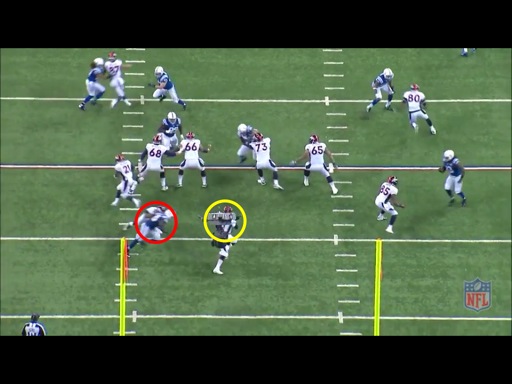 Mathis again uses the same technique to beat the left tackle to Manning. This time Manning helped by being under center and running play-action. By the time he set up for his drop, Mathis was already sacking him while being held by the left tackle. The sack took three seconds. 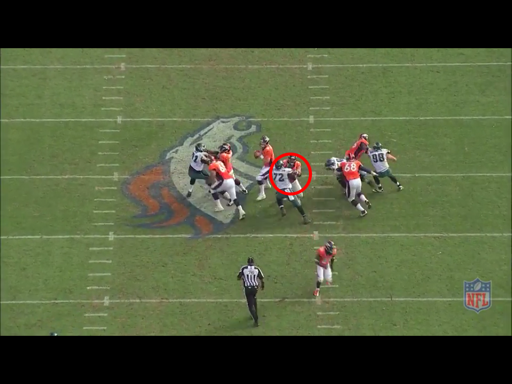 The Eagles bring four on this play. Thornton lines up at the nose tackle spot then widens out after the snap. He bull rushes the center back into Peyton Manning's lap. Cole and Barwin widen out on the right side to force Manning back up into the pocket. Manning has now locked himself in with nowhere to go. The sack took 4 seconds.

Flushing him out (Redskins game) 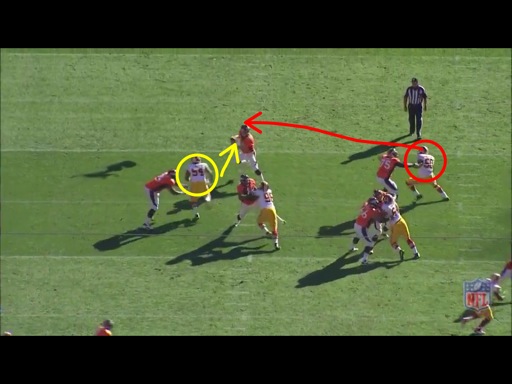 The Redskins bring four on the play. Their left defensive end and left defensive tackle go wide on the guard and tackle. They both fight across the lineman's' face. The end gets an easy path to Manning, flushing him out to his right. The right defensive end continues to hustle for Manning and comes up with the sack. When Manning is flushed out of the pocket he has no speed. It takes him time to reset his feet. His eyes stop looking down field and he runs for his life. The pressure took four seconds, the sack happened at 6 seconds.

The part many people don't talk about is the pocket. Peyton Manning wants a clean pocket on every throw. He wants to be able to set his feet and follow through on his throw. If you disrupt that, you create some of his inaccurate throws. Manning doesn't have the same arm strength or accuracy he had before the injury. He is somewhat human these days. If a team can disrupt him setting his feet on a throw and rotating in to the throw, it can pay off big. 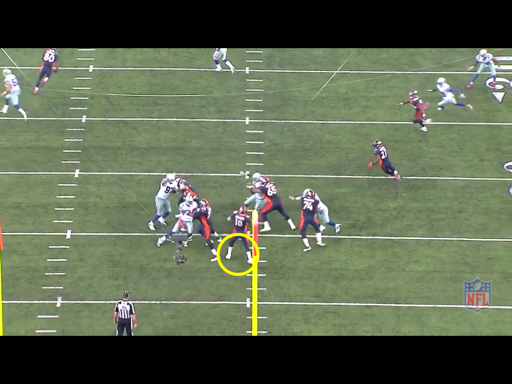 Late in the third quarter, Manning was ready to test the deep ball with Eric Decker. Demarcus Ware crashes down hard and bull rushes the tackle into Manning's lap. He rushes his mechanics a bit and doesn't have his front foot fully extended. The ball was out in less than four seconds. 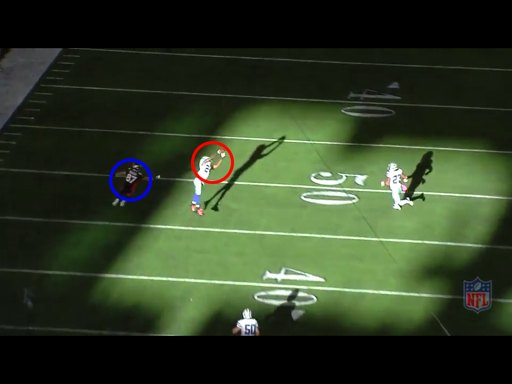 The ball is under thrown. Morris Claiborne has inside position and makes the interception at midfield. 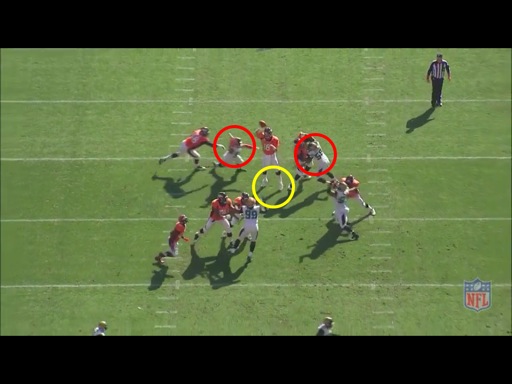 Early first quarter, Manning runs a play-action. Both of the Jaguars ends go wide on their pass rush and both begin to converge on Manning as he begins to look for his checkdown, Knowshon Moreno, on the play. His footwork is not ideal nor does he have time to step up in the pocket and reset them. His throw goes over Moreno's shoulder and he gets sandwiched on the play. The ball was out in five seconds. 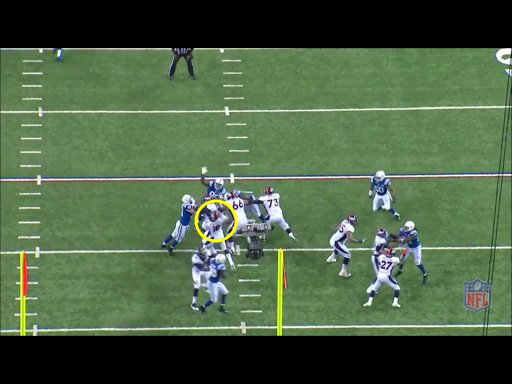 Late in the second quarter, Manning wants to try another vertical, this time to Demaryius Thomas. The Colts bring a delayed backer blitz through the B gap with Pat Angerer in a mini twist with the 3-tech defensive tackle. Angerer bull rushes the lineman, Zane Beadles, back into Manning's lap. Manning proceeds to throw the ball wide and wobbly of Demaryius Thomas. The ball was out in four seconds. 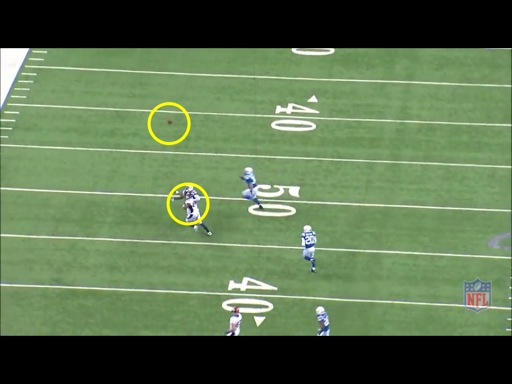 Overall, there is enough tape out there on how to alter the Broncos offense. It all comes down to how you attack Peyton Manning. You don't need to hit him on every play but if you can create a nice blend of the above tactics, there is a great chance to knock their offense out of sync.