Titans fans have a reason to be angry at the refs after Sunday's game. So do Chiefs fans.

Titans fans and and Titans LB Moises Fokou are both probably upset over one play in particular.

On a 3rd-and-5 from the Titans 44-yard line with 9:32 left in the fourth quarter, Alex Smith rushed to the right side near the sideline. He was clearly on his way to step out of bounds about three yards shy of the first down when Titans LB Moise Fokou drilled him.

After Alex went down, a flag came out. Unnecessary roughness. The Chiefs drive stayed alive, and they went down to score a touchdown to take the lead back, 20-17.

That was a HUGE penalty.

It was also very suspect. 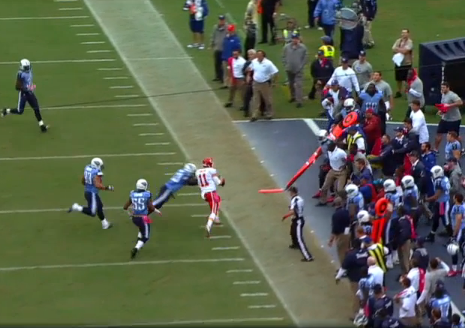 "I was shocked," Fokou told The Tennessean. "I thought I was OK. ... The way I looked at it, I thought (Smith) was still (in bounds). I'm going full speed, left my feet and I don't know how to stop in mid-air."

As you can see in this screen above, Alex is still in bounds as Fokou is in the air. This was a suspect call. The Titans probably got screwed on the refs over-sensitivity to the quarterback.

So Titans fans are upset at that play. But I bet a lot of them don't realize that Chiefs fans were already upset by that point in the game.

With 2:05 left in the third quarter and the Chiefs leading 13-10, the Titans offense faced a key 3rd-and-8 from the Chiefs 25-yard line. Ryan Fitzpatrick tried to hit Delanie Walker over the middle of the field... 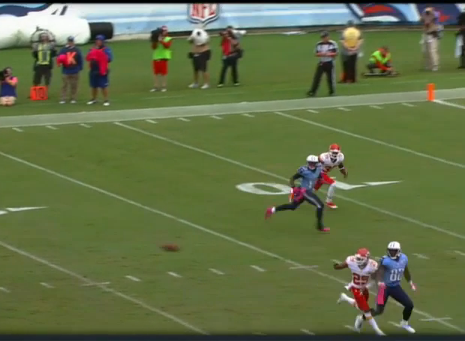 ....and it was called defensive pass interference on Eric Berry. New life for the Titans.

The screen shot above doesn't do it justice but the call was suspect. Even the announcers questioned the call on Berry, who broke the pass up that should have forced third down. Instead it was 1st-and-10 for the Titans in the red zone.

Tennessee went down and scored a touchdown on that play, taking a 17-13 lead in the fourth quarter.

There were a lot of (pink) flags on the ground and both of those calls were suspect. Luckily for KC, things worked out in the end.