NFL picks Week 9: Predicting Bills-Chiefs game and everyone else

Kansas City looks to stay unbeaten going into its bye week against a feisty Buffalo squad.

Share All sharing options for: NFL picks Week 9: Predicting Bills-Chiefs game and everyone else

The Kansas City Chiefs are the only undefeated team left in the NFL, and they get to test their mettle for the first time in four weeks away from Arrowhead Stadium against the Buffalo Bills.

Buffalo comes in with a 3-5 record after losing to the New Orleans Saints last week. There are questions to who will be under center for the Bills this week, as Thad Lewis is recovering from a rib injury and the flu. If Lewis can't play, it will be a competition between future Hall of Famers Jeff Tuel and Matt Flynn.

Without further nonsense out of me, here are the picks of the AP staff:

(All of the lines are from Oddsshark.com.)

The game plan: Stopping the Bills 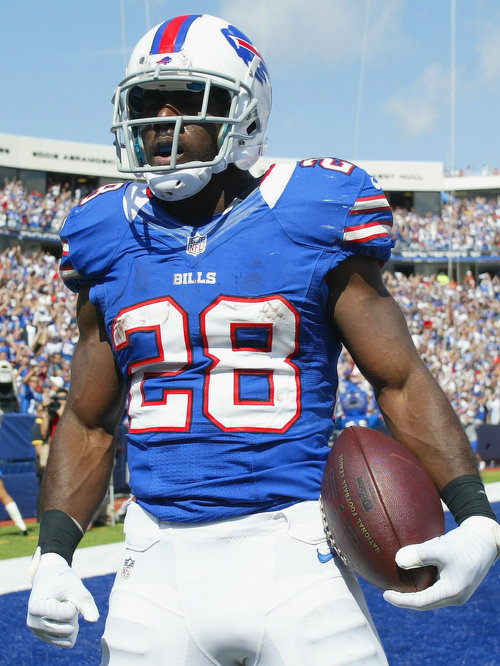 This is tricky considering we don't know who will be quarterbacking for Buffalo. I'll assume Lewis is going to play. Buffalo has a really good defense, especially the front seven. After allowing six sacks against the Browns, count me as concerned going into this one for the health of Alex Smith.

All that said, the Chiefs are a better team with an even more devastating defense. If Kansas City plays its best game, it will win. If the offense plays like it did the second half of last week it loses. I'll put my money on the Chiefs to pull it out.

I don't see a blowout from the Chiefs in Buffalo but with Thad Lewis (likely) starting I can see the Chiefs defense having another big game.

The Chiefs have lost too many games over the last few years, and have played too many close games recently for this to be a trap.

The offense and defense team-up to get 24 points on the board and whatever QB the Bills throw out there leaves the field surprised he did well enough to get 13.

I've had a total change of heart this week. Spiller and Jackson have been injured. Insert name here is the QB. Rookie head coach. Stevie Johnson will get his yards like every great WR does against the Chiefs, but I don't think this will be as close as I originally thought.

Last year, Alex Smith played what I believe was his best game as a pro against the Bills. Is that really an indicator of how he'll play Sunday? Not really. But I'm choosing to pretend that it is, so the Chiefs run away with this one.

Now, back to Matt Verderame for the rest of the picks:

Cincinnati is a weird team that has been bad on the road, barely beating the Bills and losing to the Browns and Bears. However, they face a team that can barely handle a three-man rush from a high school team. The Bengals will pound on Ryan Tannehill.

The Falcons are basically playing out the string at 2-5, while Carolina is starting to roll. The real question is whether the Panthers are good, or if they can only beat bad teams. The past three weeks, Cam Newton and the boys beat Tampa Bay, St. Louis and Minnesota. Not exactly the 1975 Steelers...or the 2013 Crimson Tide.

After the atrocity that broke out in Detroit last week, Cowboys fans still look like this. Luckily for Cowboys fans, the Vikings are coming into town. Outside of the Bucs and Jags, no team is more of an embarrassment than Minnesota. Even Dallas can't give this one away.

The Saints are maybe the best team in the NFL. With Drew Brees throwing to Jimmy Graham, Darren Sproles and a million other weapons, it is almost impossible to slow them down. New York has a solid defense, but Geno Smith is not going to do enough to get the win.

No team has a worse offensive coordinator than Brian Schottenheimer. After rushing for 200 yards, the Rams THREW THE BALL from the 1-yard line down by five on fourth-and-goal with only second remaining, leaving St. Louis with the following reaction.

If you like offenses scoring on every possession without ever seeing second down, settle in. If you like defense, you are better off throwing acid in your eyes. In truth, it is one of the more interesting games of the week. Washington has to win, and San Diego could move closer to a playoff berth with a victory.

The Raiders are better than given credit for, and the Eagles are worse than most will admit. Terrelle Pryor is also a better quarterback than Nick Foles. On top of that, Philadelphia has to go across the country and play a team believing it can make the playoffs.

Seattle has gotten to host Tampa Bay and Jacksonville at home this year. In related news, here is a clip of Seattle during their off-time this week. The Seahawks have some issues on the offensive line and in the receiving core, but the Buccaneers won't take advantage.

Baltimore might not be the better team here. Cleveland is nothing special but has a solid defense and Jason Campbell is a definite upgrade over Brandon Weeden. All that said, the Ravens know they have to win this one to stay in the playoff race.

Neither one of these teams are great, but one has been able to overcome shortcomings while the other has succumb. New England is getting an awful year statistically out of Tom Brady, but he is getting the job done. He'll get it done again this week.

Indianapolis looks like a very good team and is coming off a bye. It's tough to see Houston pulling itself off the mat, mostly because of this guy. Case Keenum might be good, but it isn't going to matter this week.

In commercial guy's voice: McCown, Rodgers, is the spread 25 yet?