Browns vs. Chiefs: The best and the worst

His Dirkness recaps the Chiefs 23-17 victory over the Browns with the best and worst moments of the week.

Share All sharing options for: Browns vs. Chiefs: The best and the worst 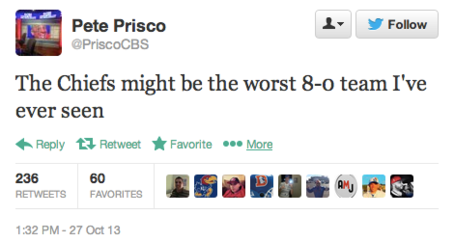 Sheeeyyyiiiitttttt. Sounds like one of them good problems to me.

Hell, it sounds like being the worst looking guy to ever knock boots with Marisa Tomei. And I'd love to be that guy (yes, I could've picked any woman in the world and I picked Marisa freakin' Tomei because she warms the cockles of my heart).

In my opinion, he's implying the Chiefs have the most heart and resolve of any 8-0 team ever, because they're winning in ways that are hard to explain on paper.

I'll support that over talent any Sunday of the year.

Or maybe "experts" just can't wrap their mind around the fact that great defenses win football games, too. Remember them? They generally play half of the game, also.

Or hopefully, the worst Super Bowl Champions ever.

Best half of the season - Chiefs offense, 1st half. In a way, they scored on every possession of the half: FG, FG, TD, missed FG, TD, kneel down. Obviously, they hung Ryan Succop with a 50+ yard attempt on his miss (looked on point, hooked wide seemingly out of nowhere), but this was a solid defense that they absolutely took to school. 281 total yards, 172 passing, 9-12 on 3rd downs, and 22:46 time of possession.

Unfortunately, they were forced to take a 12 minute siesta...

Worst half of the season - Chiefs offense, 2nd half. What changed? Seemed to me the Browns were running a lot of soft zone in the first half, allowing the Chiefs offense to pick them apart with underneath throws (a bend but don't break defensive mentality - The Romeo Special). While in the second half, the Browns stifled the Chiefs offense by switching to an aggressive defense with man coverage across the board. 50 total yards, 23 passing, and 1-7 on 3rd downs. I'm not sure if the Chiefs simply weren't expecting this coming out of the break or can't handle this type of defense. But it is something to keep your eye on moving forward.

Best sneaky good move - Jeff Allen. Something I picked up on in my re-watch. Allen throws his DL to the ground on both of these screen passes (Example 1 and Example 2), opening up free space for Jamaal / Anthony Sherman to read their blocks and get upfield. I'm not sure either play succeeds without it. Savvy move from Allen.

Best blocking WR in the NFL - Dwayne Bowe. Do I know this? Of course not. But I do know Hines Ward is no longer in the league, and that Bowe had two monster blocks yesterday. And that he might be a better RT than Eric Fisher right now.

Best player on the field - Derrick Johnson. This was not hard to see. He opened the game with a 2 yard tackle for loss. Next possession, he stuffs a 3rd and 2 completion for no yards. He registers 5 of the team's first 6 tackles on the day, and 8 of the first 10. That's absurd. He stuffed a Campbell scramble (fun to say out loud) on 3rd and 5 just shy of the first down. And he layeth the smacketh down on Fozzy Bear-aker over the middle, forcing an incompletion (a hit he might've been ejected for in college, no joke - Note: This is me making fun of College Football, not calling his hit dirty).

Diggity Johnson has gone wildly unnoticed this season given the emergence of Poe, the dominance of Houston and Hali, the joy of saying Urrrr Burrrr, the surprise that is Marcus Cooper, the "unheralded" talk saved for Tyson Jackson and Mike Devito, and the love affair with Bob Sutton. But Sunday was unquestionably DJ's day. Go. You're my.

Bess player on the field - Davone Best. Er...yeah, close enough. Bess recorded 3 drops on the day - one was a bit unfair (behind him), one was pretty bad, and the other essentially ended the game (on what would've been a hell of a play by Campbell). Oh, and his muffed punt was the biggest play of the game (20-17 at the time, 7 minutes left, poor punt from Colquitt - the Browns would've had the ball at the KC 40 yard line). The weird part was that he actually caught the punt and then just dropped it when he looked upfield. Thanks Davone, you're the Bess.

Worst game as a Chief - Sean Smith. Man, two weeks ago I wanted to write about Smith as the "Best player nobody is talking about" but wasn't able to fit it in. Then he struggled a bit against the Texans, and then he pooped the bed vs. the Browns. I've still got faith in Smith, he just isn't fast enough to keep up with a burner like Josh Gordon. I think you might see Marcus Cooper following the faster WR all over the field in the near future.

Best nose tackles in the game - Dontari Poe and Phil Taylor (given Vince Wilfork's injury). I may be over-celebrating Taylor because Rodney Hudson might not be any good (really don't have a read on him - got his ass kicked this week), but he looked like Warren Sapp out there. Meanwhile, Hongry Hongry Hip Poe had his way with Alex Mack (the outstanding center for the Browns, not the TV character - cause that's assault, brotha).

Best back-to-back plays - Eric Berry. Early 4th quarter following Houston's sack, Berry knifes throw the line and takes out both the OL and the RB for a loss. The next play he blows through two blockers and wraps up the RB's ankles on what looked to be a promising screen pass. When he gets rolling, man... Look out.

Worst quarter - Joe Thomas, 4th quarter - Gives up a pressure to Tamba, which blows up the play. Later whistled for a false start and two big time holding calls.

Worst call - I don't think Tamba was offsides on Houston's strip-sack. Good lord, when are the Chiefs ACTUALLY going to actually get a break this year? If I was Eric Decker, I'd still be whining about this 3 months later.

Best moment - Dunta Robinson coming out on the field to give Marcus Cooper a high five after a great pass breakup. Here's a 10 year veteran, a former first round pick, a player who's had the franchise tag slapped on him before, who loses his job to a 7th round rookie picked up off of waivers. And yet, he makes a point to come on the field and congratulate Cooper on yet another great play made by the rookie. A play, mind you, that solidifies Cooper's spot on this defense, as well as Dunta's spot on the bench. I can't think of a bigger sign that these players are buying into this team 100 percent right now. It's a beautiful sight to see.

Best reason to kickoff to start the game - Arrowhead is fired up and ready to go right at kickoff. The first drive of the 2nd half the crowd is dead because everybody is still coming back from the crapper. Joel, please tell Andy for me. He should remember me.

-Apologies for the Amateur Hour Postgame this week, the audio quality was horrendous (thanks, Google Fiber). It's something that will be fixed for our next show.

-No Best & Worst next week, I will be in Jamaica for a wedding (don't worry, not mine). In fact, I'll probably be the worst looking drunk guy sitting on a beach in November. Boyeeeeee.