We are now halfway through the NFL season, and the Kansas City Chiefs schedule only gets tougher from here. Last week was the first time the Buffalo Bills have lost by more than seven points this season. The Chiefs are 0-6 in Buffalo since 1986 and have a great opportunity to change that this weekend.

The Bills offense comes from the New Orleans Saints. Bills coach Doug Marrone coached under Sean Payton in New Orleans and you see a lot of their formations and influences on this offense.

In some ways you will see the pieces of the Chiefs offense as well. The Bills offense revolves around getting the ball in the hands of CJ Spiller and Fred Jackson. They attempt to spread a team out with shotgun and single back formations then run off-tackle, dives, counters or cutbacks. Spiller and Jackson are their primary targets in the flats and check down passes as well. After they have established those two, they add in Stevie Johnson and Thad Lewis' new favorite target Scott Chandler.

EJ Manuel was beginning to grow in this offense. He had the ability to make a majority of the throws. He stood tall in the pocket and had some scrambling ability, and when they lost him against the Browns it looked like they were doomed with Jeff Tuel.

Thad Lewis was promoted from the practice squad the following week and has impressed since. Lewis isn't as mobile in the pocket as Manuel but he throws a solid football. Lewis has good zip on the ball and he can occasionally throw it deep.

Pictures: Thad Lewis against the blitz

Lewis doesn't have the pocket awareness yet, so if you bring the blitz against him, and take away his safety blankets / hot routes, he will fold like a tent. Lewis also doesn't like getting hit. When he sees the blitz or a hit coming he will cringe up, throw to ball early or high of his target. He will fall back on his throws. If Lewis still has the ball in his hands during the hit, he doesn't do a great job of protecting it. He put the ball on the ground multiple times against the Saints.

Lewis isn't used to seeing a multitude of looks and gets confused with protection audibles and reading a defense. Lewis' comfort throws are between the numbers and the hashes. If you take those away, he will panic at times. Lewis is capable of throwing the out route, deep post or go routes but he throws more to a spot rather than pinpoint accuracy. He trusts his receiver to run underneath it. Lewis is a much different QB after taking 2-3 shots. He can get rattled.

If Tuel comes in at QB, it is over for the Bills. He has no accuracy and will get rattled worse than Lewis. 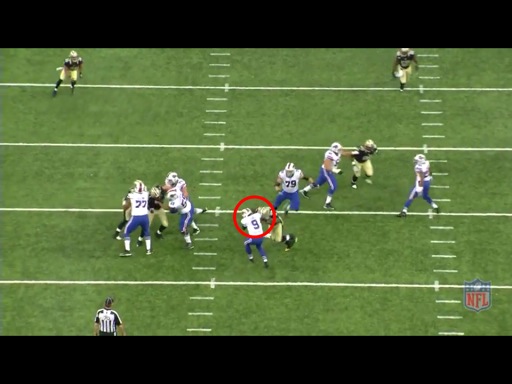 (Thad Lewis getting hit by Jordan and fumbling the ball) 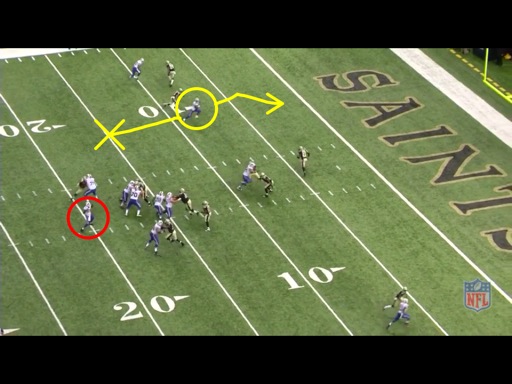 CJ Spiller is right up there with Jamaal Charles in his running ability. Both are two of the most dynamic runners in the NFL. You get them into space and they are gone. Spiller loves to setup his cutback runs. He isn't big on running between the tackles, he wants to bounce it outside towards the sidelines and outrun everyone.

Spiller is the Chiefs number one problem to step this week. Fred Jackson, his backup, sees just as many touches. Jackson looks quicker this year. He looks like he has lost some weight and is a more dynamic runner. He is more of their between-the-tackles runner and will break tackles for the tough yardage. Both are great in the flats and as checkdowns. You must account for both on any play. Both sustained injuries the past three weeks. Spiller was out of the Saints game, so Tashard Choice saw more time. 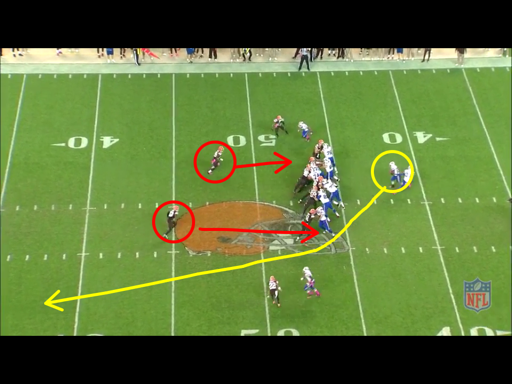 (CJ Spiller using the cutback to outrun everyone for a TD) 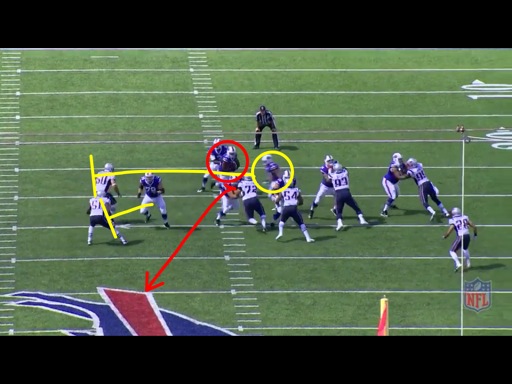 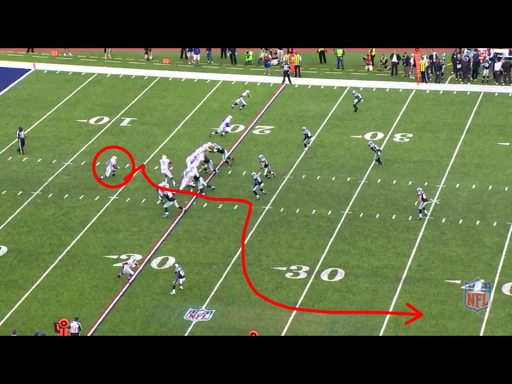 Stevie Johnson is the No. 1 headache of the receiver corp. He is their savviest route runner and understands how to get upfield quickly for the YAC. Johnson does a good job of setting up his routes and getting inside position to make the plays on the ball. I like how Johnson attacks the ball and gets good body position.

TJ Graham is the Bills burner at receiver. He is still learning to position but is dangerous on reverses, go routes and screens. He can make you pay if you don't respect his speed.

Robert Woods and Marquise Goodwin are the other primary targets of this passing attack. Goodwin still has a lot to learn in terms of route running but has natural speed for the deep post and the go routes. Woods is a better route runner and can give you solid underneath to immediate routes like the dig, cross and slant.

The tight end, Scott Chandler, has seen more looks with Lewis at QB. He caused some problems for the Dolphins and Saints from a matchup perspective. 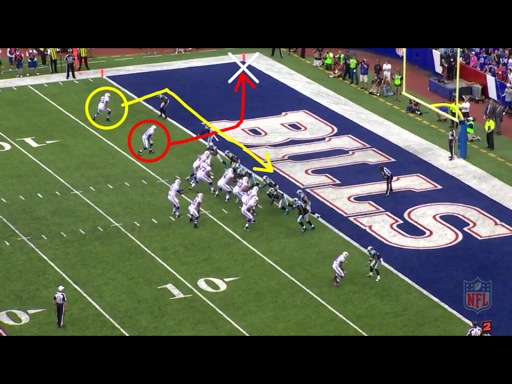 (Johnson's corner route for the game winner vs the Panthers) 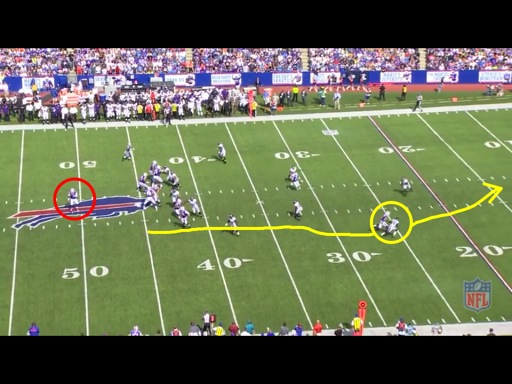 The Bills are a unique defense. Mike Pettine coached along side Bob Sutton and Rex Ryan in New York. You will see a little bit of the Chiefs defense and some of the Jets defense in their blitzes and alignments.

This defense uses the speed and power of their defensive line to control the line of scrimmage and attack the QB. They use their speedy linebackers and safeties to bring some of the blitzes at crucial points and love to jump the routes they believe are tendencies of their opponent. They can be burned with this strategy. 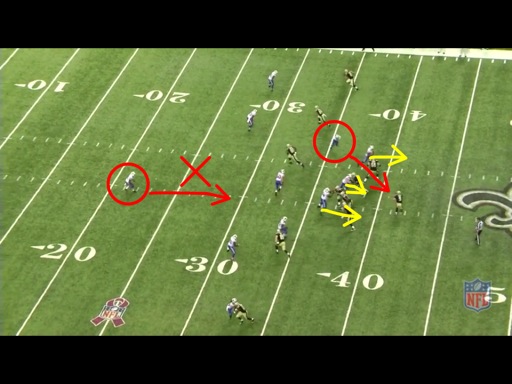 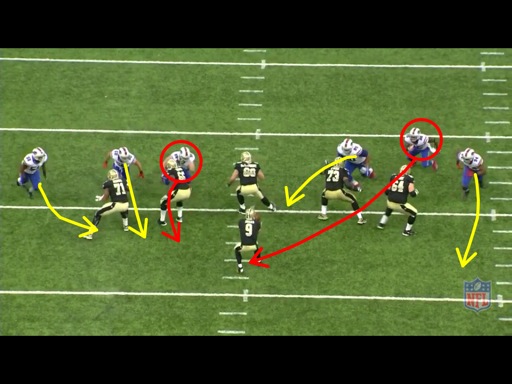 The line is an impressive combination: Alan Branch, Kyle Williams, Marcell Dareus, Mario Williams and Jerry Hughes. Branch is one of their stout run defenders on obvious run plays. When he goes out, they bring in Jerry Hughes to rush from one side with Mario Williams rushing the other side. The Bills like to mix the two up so an offense can never get comfortable.

This defensive line will be one of the Chiefs biggest challenges this season.

Marcell Dareus and Kyle Williams are their bull rushers who have the speed and power to twist on any play. Hughes and Mario will drop back in to zone coverage from time to time and stand up on some rushes. What makes this defensive line unique from most in the NFL is their combination of speed and power across the board. Some teams early on in the season tried halfback screens against them and the defensive line got to the QB so quickly, they would have to throw it away.

This defensive line will be one of the Chiefs biggest challenges this season. 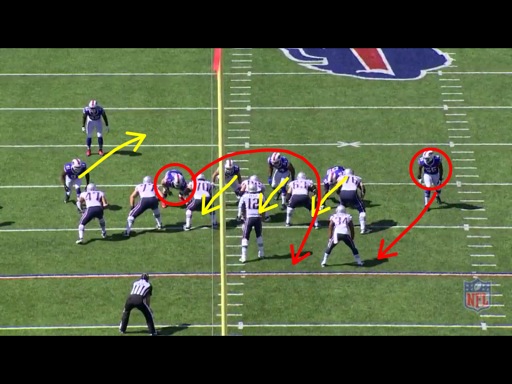 (Kyle Williams flushing Brady out of the pocket) 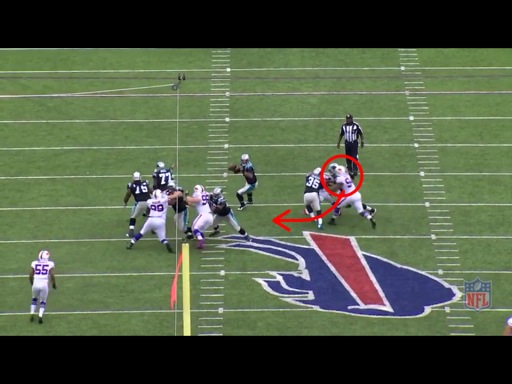 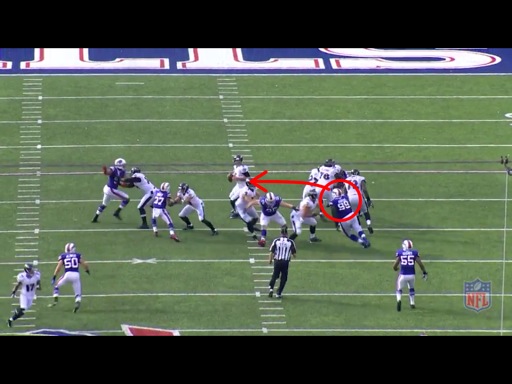 The guy who jumps out on every single play is the rookie Kiko Alonso. The closing speed of this linebacker is fantastic. I loved him coming out of the draft this past year and hoped he would end up in the Chiefs system. He had the ability to cover, blitz and athletic ability that would have left Chiefs fans in awe.

The Bills got him and all of his ability in college has translated into the NFL. Alonso already has a handful of interceptions this season because of his speed and hustle. He can shoot a gap as quickly as Derrick Johnson. I see a ton of Derrick Johnson in Alonso.

The other linebacker that presents a handful of problems is Manny Lawson. Lawson is capable of rushing the passer; he has the speed to drop back into coverage with issue and is a solid tackler. 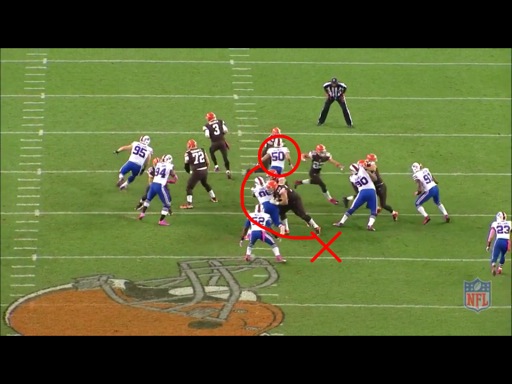 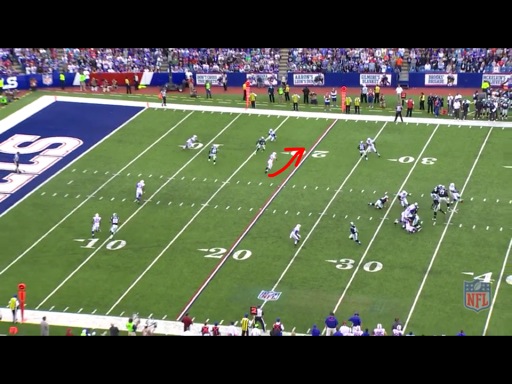 (Alonso jumping the dig route for the INT vs Cam Newton)

This secondary lives and dies by their desire to jump routes. They will gamble a great deal to jump routes and have been burned by it. Their primary corners are Leodis McKelvin and Stephon Gilmore. The guys who have been making plays though are Nickell Robey the rookie and safety Jim Leonhard. Those two have a knack for jumping routes and getting the pick or disrupting the play.

Overall, the Bills are a physical bunch that are pretty good tacklers and physical hitters but have gotten called for a few personal fouls because of it. Da'Norris Searcy is one of their enforcers and effective blitzers. Drew Brees tested them out with double moves a handful of times and got them to bite on his pump fake and dropping the shoulder before making the throws. 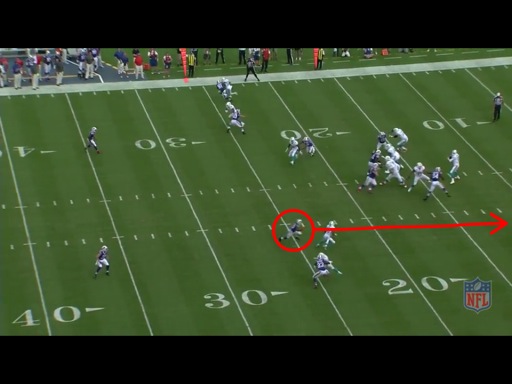 (Roby's pick six against the Dolphins. He jumps the route)

On defense: I think this team will use Kiko Alonso to take away some of the throws to the TE. I see them using Alonso as a spy on Smith and utilize his speed to take away Charles in the flats or on checkdowns. The Bills will spend a great deal of time this week seeing how to blitz Smith and finding his favorite throws. They will then try to bait him into those throws with their blitzes and jump the routes. Smith must be careful with the ball this week. I also expect to see them try to overwhelm the offensive line with their blitzes on 3rd-and-5 or longer with Alonso dropping back into coverage. 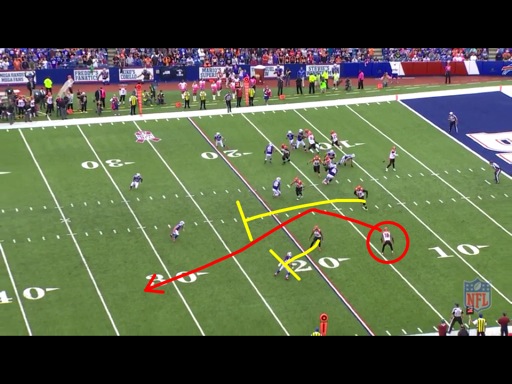 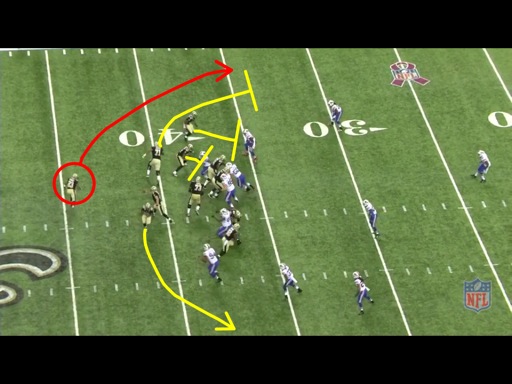 (Use their keys against them - The Saints sent a receiver in motion. They faked the reverse and pitched the ball to Thomas for a 12 yard gain. They used their receivers to seal the edge with crack backs and allowed the left tackle to pull into space.)

This will be another close and physical game. The Bills defensive line will be handful for the Chiefs offensive. Kiko Alonso will seem like he is all over the field. The Bills have played every game close headed into the fourth quarter, so this team is use to it. Putting pressure on Thad Lewis will be the key to this game.