The Chiefs are unlikely to make a move, but that doesn't stop fans from considering the many possibilities.

The NFL trade deadline looms large on Tuesday afternoon, and it's not surprising to hear rumors on the aforementioned players and several others as the day draws closer. It's the line in the sand where teams must decide to add a final piece and make a run for the playoffs or admit defeat after eight weeks of the regular season. 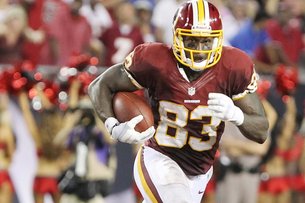 If a trade is made, these are the likely candidates.

The actual trade deadline is at 3:00 p.m. CT, which means there's just over a full day remaining for teams like the Kansas City Chiefs to make their final offer on a player up for grabs. As exciting as it is to think of a team like the Chiefs adding even more talent to an undefeated team, fans should prepare for lots of talk and little-to-no action.

The reason is that there's simply little movement at all at the NFL trade deadline. No other major sport has a more boring in-season deadline than the NFL. Salary cap restrictions come into play. Injuries complicate the picture. Each game counts for so much, so it's hard to give up just after 8 games. Even if a team like the Giants are 2-6, they can also claim a two-game winning streak in a horrible division. Given Victor Cruz's injury on Sunday, why would they give up Hakeem Nicks right now (just to give an example)?

However, for the football fan longing for some movement, there is hope this season. There have already been an impressive number of trades. Trent Richardson to the Colts. Levi Brown to the Steelers. Bryant McKinnie to the Dolphins. Eugene Monroe to the Ravens. All have happened in-season, and it shows that general managers are more swap happy than ever.

Even the Chiefs have pulled a couple moves since John Dorsey took over. Javier Arenas was flipped to the Cardinals for Anthony Sherman in a deal that every Chiefs fan would make again. In a dud-for-dud trade of wide receivers, Jonathan Baldwin was dealt to the 49ers for A.J. Jenkins. And of course, there was a small deal with the Niners for Alex Smith as well.

Chiefs fans should expect to have the same roster on Wednesday as they have now, and the same could be said of every team in the NFL. They've already won every game with the mix of players that they have now, and despite any flaws on the roster, there's hope the team will naturally get better as the coaching staff learns to use the players in house. However, if a player like Tony Gonzalez comes back to KC or Greg Little lines up in the slot, it's only because there's something in the water this year.