The Kansas City Chiefs defense continued to show why they're considered one of the best in the league this week against Houston. Kalo talks about some things he liked, didn't like, and gives the numbers for the week.

When the game is on the line, who else would you want as your lockdown defense? 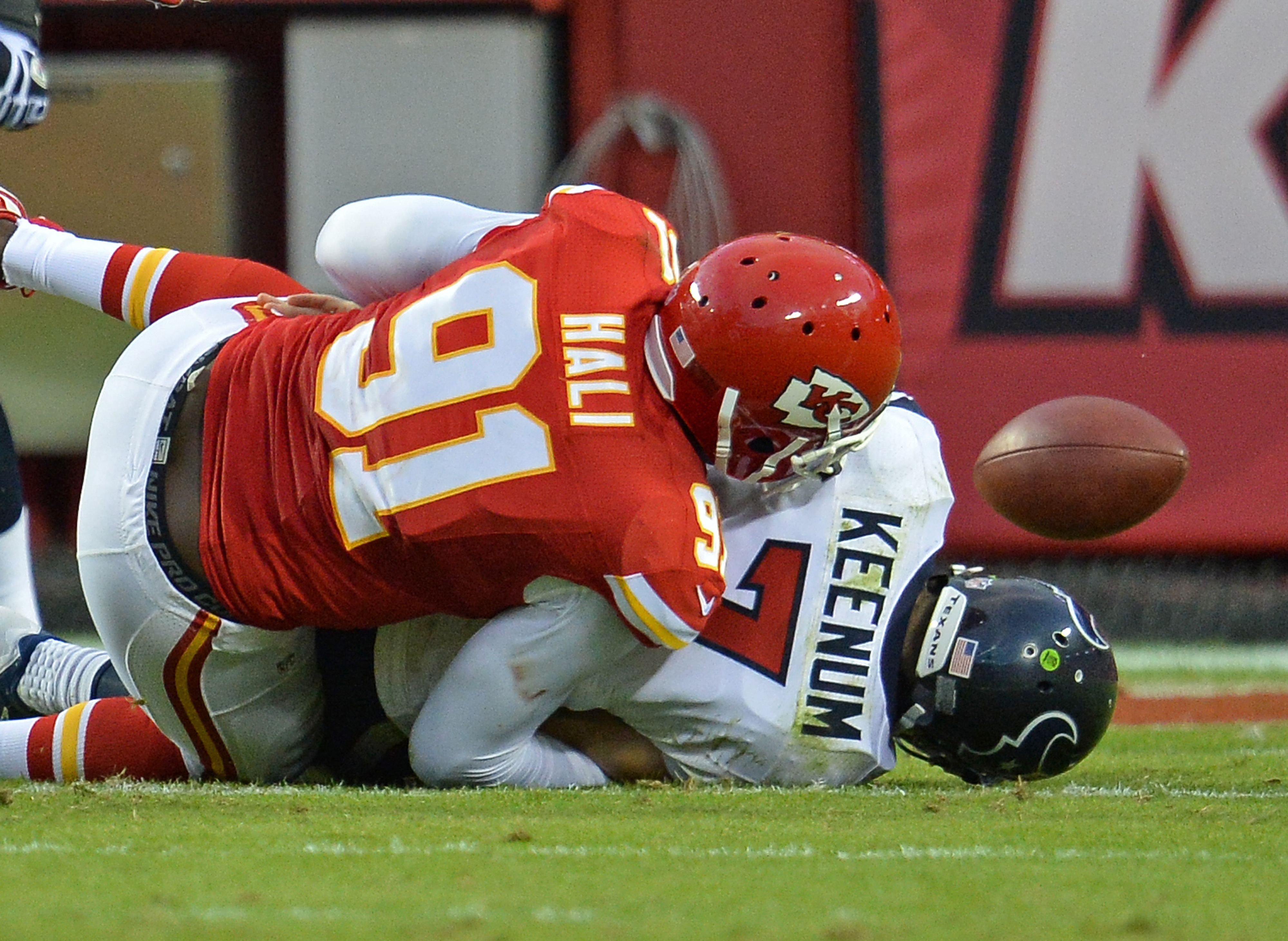 This past Sunday, the Chiefs once again were clinging to a lead late in the game. An untested QB had played well early on and was giving a Houston team something to cling to as the clock ticked downward. The Texans defense had even held on a goalline stand, and intercepted Alex Smith in their own red zone to prevent another score. It was a one-point game, and the momentum could have switched on a dime to favor the vistors.

The Chiefs defense never gave them a chance.

Sure, the D struggled early with Houston's passing game (more on that later), but in a tale all too familiar this season, the defense went on lockdown late in the game to secure the win. The offense was deep inside Houston territory twice late in the game and couldn't punch the ball in, but honestly, I wasn't worried. The Chiefs defense allowed -1 total yards in the 4th quarter, pinning Keenum and the Houston offense further and further back into their own territory. That is an incredible statistic to be sure, but perhaps more incredible is that fans of this team expect it to happen that way this year. Sure, I hear the comments about how they "can't put games on the defense forever", but the facts show otherwise. This is a defense that just gets better and better as the game goes along. Call it Bob Sutton's game planning (that's a good portion of it), or call it better conditioning, or just call it being straight up tough. When the chips are down, this defense builds a brick wall and shuts down opposing offenses.

Now, for this week, I'd like to look at some of the things Houston did to exploit the Chiefs defense early, and how they adjusted later in the half.

At this point in the game, the Texans had some success on the ground. They had run the ball five straight times and had a manageable 3rd down in front of them. 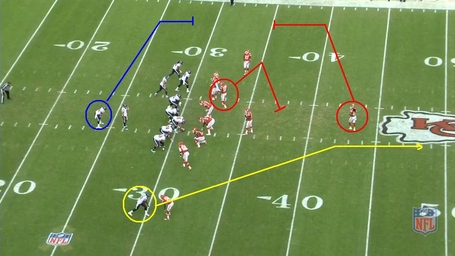 The Chiefs are loaded up against the run, but prior to the snap, the running back motions to the top of the screen. There is some confusion as to who should cover the back, as initially DJ tracks with the back, but Kendrick Lewis waves him off and goes out wide to cover the back. Now, Houston is in an empty back set, and there's no deep safety. It's an easy decision, and Andre Johnson (yellow circle) jukes Flowers at the line, making an inside run at where the safety used to be. It's a 26 yard gain on 3rd and 1.

Houston's coaching staff must have seen this on prior game's film. I had noticed Kendrick Lewis occasionally picking up players out of the backfield in previous weeks, but it wasn't consistent. The Texans must have decided that should the safety move with the running back, the hot route was Andre Johnson. The Chiefs defense adjusted to this in the second half by either covering the back with a linebacker or shifting the coverage to bracket Johnson inside with a linebacker. After that, Keenum had to look elsewhere, and it resulted in sacks.

Just after a holding call on the offense, the Texans were stuck in a 1st-and-a-lot situation. The Chiefs coverage scheme was...a little different than normal: 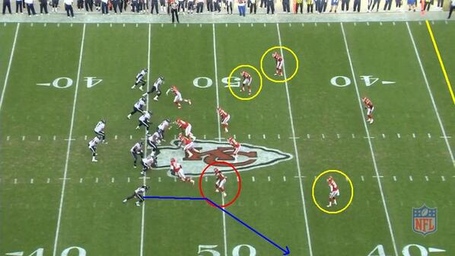 That is NOT press man coverage, and the player highlighted in red is starting free safety Kendrick Lewis. Behind him is Marcus Cooper. At the top of the screen are Flowers and Smith. It's odd to see such a cushion out of these Chiefs players. Lewis is up near the line of scrimmage to try to show a blitz look, then he's going to drop into coverage. However, Hopkins is too fast of a receiver to allow this kind of break to the outside, especially with Cooper dropping back. It's an easy throw to the outside for Keenum, and neither player is in a position to make a play.

I believe what the intention for this scheme was to try to see how Keenum would react to a safety blitz early in the game. He reacted VERY well, throwing to the side of the safety blitz, knowing that Cooper was going to make sure Hopkins didn't get behind him. Sutton got the memo, and just stuck with press man coverage and blitzed hard like we've seen in the games prior. 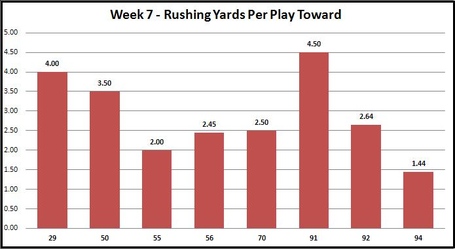 The Chiefs defense once again showed how tough it was to run inside on them this week. Tyson Jackson was a monster, with 1.44 YPPT over 9 runs at him. The Texans ran up the gut with Ben Tate quite a bit this week, and Dontari Poe's 14 runs toward showed that. The edges weren't run at as much, with Tamba and Houston only seeing 2-3 plays each. Very solid performance by the center of the D, and a good reason why Houston abandoned the running game in the 2nd half. 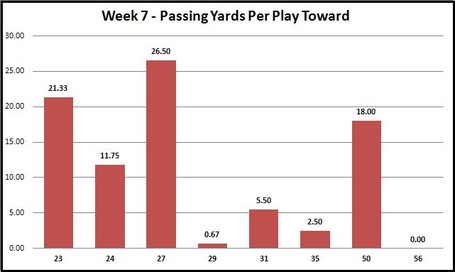 The passing statistics, on the other hand, were not great this week. Sean Smith looked mortal for the first time this season, giving up 106 yards on 4 targets, hence the big number. Kendrick Lewis also factored into the passing game more this week, as I showed above, and his numbers don't look great either. Eric Berry was solid, allowing 2 total yards on 3 targets, and DJ led all with no yards allowed on 3 targets.

Tamba led all Chiefs with 3 quarterback pressures. He got a lot of help, though. Brandon Flowers, Justin Houston, Mike Devito, Dontari Poe, and Tyson Jackson all had two pressures. Eric Berry and Allen Bailey each had one.

For the first time this season, the beginning of the game had me worried about the defense. Things just didn't look right out there. However, on the rewatch, it seemed that Bob Sutton spent the first half dialing up different looks to try to see what rattled Keenum. To the young quarterback's credit, he handled things very well until Sutton went back to his bread and butter with the game on the line. Even though I started the game with trepidation, I ended it knowing that the defense was going to get it done in the 4th quarter.

It's shocking, really. A 2-14 team last year with a defense that just couldn't get it done for a full game is now something that I can count on to win. When it comes down to it, that same defense is about the surest, most consistent thing in the NFL right now...and there's no reason to think this brick wall defense isn't going to stay upright.