Various Chiefs players and the team's head coach said that Campbell presents a solid veteran quarterback who they respect more than you might think.

The Kansas City Chiefs have already faced a number of back-up quarterbacks in the first half of the 2013 season -- from Case Keenum of the Houston Texans to Ryan Fitzpatrick of the Tennessee Titans. Now in Week 8 against the Cleveland Browns, the news broke on Wednesday that Jason Campbell would be at the helm rather than starter Brandon Weeden. 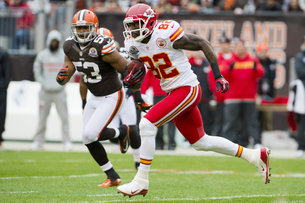 In the Browns' case, the change is supposed to be for the better. Weeden has played poorly and Rob Chudzinski hopes Campbell can bring some consistency to the offense. If you listen to the Chiefs respond to the quarterback change, it's clear they respect the switch Cleveland officials have made.

"Listen, Jason, I think, is a good football player," said Chiefs head coach Andy Reid of the switch. "I have had a chance to have teams compete against him, and he knows what he's doing. He was pretty good in college, and he is good in the pros. We'll prepare for their scheme, and I think that's the important part of it. I don't think they're going to change a ton of what they do. I mean, that's not what you do in these situations."

Campbell comes into the game with a career record of 31-40 as a starter. He holds a 60.8 completion percentage in his career and has thrown 76 touchdowns against 52 interceptions. Chiefs players like Tyson Jackson believe the veteran quarterback has been around enough to smartly attack a defense like the Chiefs.

"I guess it's good for us, but we just have to prepare for both of those guys," said Jackson. "You never know what will happen come Sunday. We have to make our game plans accordingly and see what happens come Sunday. I mean Jason Campbell is a veteran quarterback and has been around the league a long time, so we know we have our hands full with him also.

We just have to come out and play regardless of who the quarterback is.

"He's a guy that learns quickly and has been in a few different systems," added Eric Berry. "We've played him before. The offense doesn't really change too much when he gets in there because he's pretty smart and he picks up on the calls that the guys have for him. We just have to come out and play regardless of who the quarterback is. We have to make sure we're on top of our assignments and make sure we're on top of everything."

However some defenders aren't concerned one way or the other who is at the helm for the Browns. Instead, linebacker Tamba Hali said the only thing that matters is his own preparation, since that's the only aspect of the game he can control.

The Browns visit the Chiefs at Arrowhead Stadium on Sunday. Kickoff is set for 12:00 p.m. local time.