We interviewed KC Chiefs rookie OT Eric Fisher on Tuesday morning as part of his participation with @TideNFL and their "Tide Color Captains" program. We asked a few real questions but tried to keep it light-hearted. Read on for the entire interview.

Fisher: That's a tough one. I don't even know. I don't think I have an answer for that one. I follow mostly my friends from college and high school. I guess I don't know the answer to that one.

When Andy Reid came running into the locker room on Sunday, did he remind you of the Kool Aid Man?

Fisher: That's the second time I've been asked that today. He did not resemble the Kool-Aid Man to me. He just looked like coach Reid to me. He was pretty pumped up after that game. Any time you start 7-0 that's a pretty cool thing. Great experience and a great thing to be apart of.

What is the biggest tip you've left on a meal since you got in the NFL?

Fisher: I really don't go out to any crazy restuarants. I'm pretty simple and I keep it pretty simple meals. I don't know, probably like 60, 70 bucks ... I'm not sure. 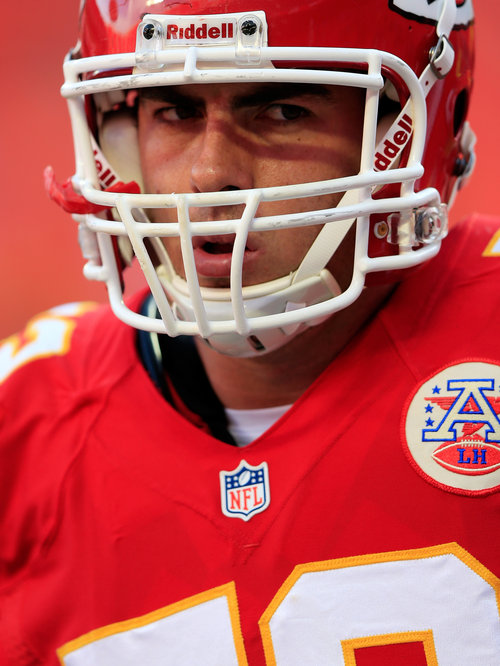 So you're a normal dude then?

Fisher: I go to normal restaurants. I think people are sometimes surprised to see me at some restaurants.

When you were broke in college, what was your go-to cheap meal?

You know they're taking that away, right?

Fisher: A bad day for America.

Does Sean McGrath groom his beard in the locker room?

Fisher: I've never seen him. I don't know. He combs it with his fingers during practice and stuff. He's pretty proud of it, I'm not gonna lie.

Would you rather fight one horse-sized duck or 500 duck-sized horses?

Would you rather fight one horse-sized duck or 500 duck-sized horses?

Fisher: Probably the one horse-sized duck.

You think you can take one?

The harder transition: Left to right tackle or the transition from college to pros?

Fisher: Probably the left side to the right side.

Is that because of the muscles?

Fisher: Basically the muscle transition. When you do something for four years straight and then completely reverse it, it's a little bit of a challenge.

What is something about Alex Smith you didn't know?

Fisher: The one week I was out I was able to watch the game as a normal person and he is by far the most composed quarterback I have ever been around. The guy just has such great composure there in the pocket, in the huddle and coming up to the line he just takes care of business.

Are you surprised at the Chiefs 7-0 start?

Fisher: I think as a rookie I had so much other stuff on my plate I don't have time to get caught up in any of that. I just take it week by week and the fact we're 7-0 is pretty cool. All the guys on the team told me about last year's record, but to win in the NFL it's not an easy thing to get done. They're just telling me to cherish every moment of this.

Have you allowed yourself to look ahead to the Broncos games?

Fisher: I have not. The only week I'm looking forward to is this week against Cleveland. When that game comes along, it will be a good one but we're all concentrated on Cleveland.