Following Alex Smith's touchdown run shortly before halftime, a debate broke out in the press box. Was the 5-yard touchdown run a designed play or a botched play? The sides were split -- I was on Team Botched -- and after the game we found that, indeed, it was a botched play.

The Chiefs had a 3rd-and-1 from the Texans 1-yard line with 59 seconds remaining in the half.

This is how they lined up: 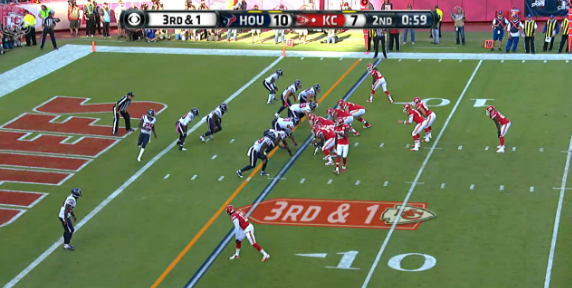 This was a read option. Alex Smith takes the snap and turns to his left where Jamaal Charles is supposed to be. Alex's options at that point -- if the play were run correctly -- were to hand it off to Jamaal or keep it and run it in himself.

But the play was NOT run correctly.

Jamaal went to Alex's right instead of his left. So Alex was left faking a handoff to ... nobody. 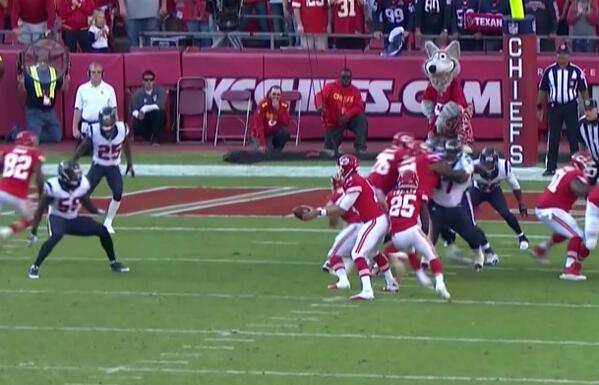 Luckily, he quickly recognized the situation -- as if he had any other choice -- and ran it on in.

Andy Reid: "There was probably a little miscommunication there. It worked."

Jamaal Charles: "Yeah, we made that play up (laughs). I went the wrong way. I was moving around and all the formations were moving all day and I just forgot which way to go. My mind went blank, and I'm just glad that Alex was able to execute the play and score."

Albert's response: We scored. It doesn't matter RT @Bill_Manion: @ArrowheadPride Designed or not put it in the book!