On a day where the Kansas City Chiefs were without Brandon Flowers, Marcus Cooper decided to imitate him. Read on for a breakdown of every Marcus Cooper snap vs. the New York Giants last week.

This is not a piece for the faint of heart. It's 2,000 words and details every passing play Marcus Cooper was involved in against the New York Giants on Sunday.

Of course, Kalo already did a great job summing up the defense, but I couldn't help myself. I thought since Cooper was such a story, I would give you all a play-by-play breakdown of his effort.

I gathered all of my information below by watching a combination of coaches film and regular broadcast.

Cooper is lined up man-to-man wiht Hakeem Nicks. Screen pass though, so tough to say what would have happened.

This is where things begin to get interesting. From this point on, Cooper is almost exclusively in man-press coverage.

Cooper is working in man coverage against Reuben Randle. Cooper gives a good jam at the line of scrimmage and covers well on a crossing route. The pass goes to Nicks however for a first down.

Cooper once again lined up against Randle on the far left side (from a defensive point of view). Randle tries to run a fly pattern but Cooper gets great position on the inside and uses the sideline as a weapon. Tamba Hali ultimately gets a strip-sack, helped out by nice coverage behind him.

One thing that's obvious is how willing Bob Sutton is to put all his CBs on an island.

One thing that is already obvious at this point in the game is how willing Bob Sutton is to put all his CBs on an island. Cooper is an untested rookie, and yet in this drive alone he goes up against Victor Cruz, Nicks and Randle man-on-man.

Cooper had good coverage on Cruz out of a bunch formation. The play is blown up immediately by Dontari Poe, who gets great pressure and flushes Eli Manning out of the pocket.

Cooper is lined up outside and the Chiefs go into a rare zone defense. On the snap, Cooper drops deep right and Eric Berry fills in down low, perhaps waiting on a run. Allen Bailey then sacks Manning, ending the drive and almost Manning's life.

Manning gets a combo look from the Chiefs and dumps off a short pass to Cruz. Cooper is covering Nicks. Very solid coverage. 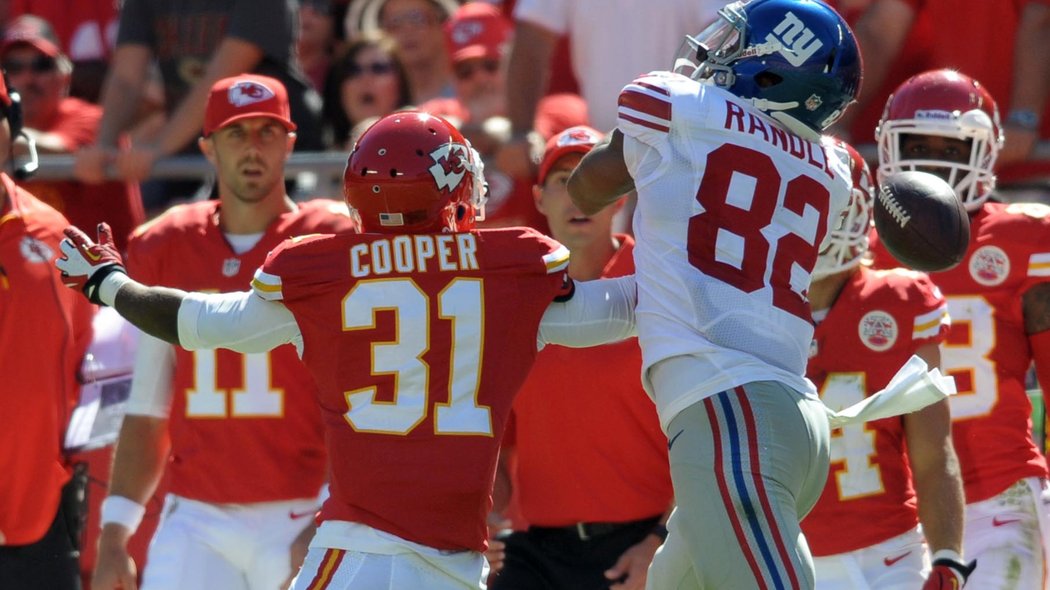 Well, not even Marcus Cooper is perfect. Nicks starts on an outside move against man coverage and then uses a powerful swim technique to break inside. Cooper recovers and makes the tackle, but only after a nine-yard catch for a first down. This is the only reception against Cooper.

Cooper is once again lined up wide left in single coverage against Nicks. Nicks goes on a fly pattern and Manning never looks his way, hitting Randle instead for five yards in front of Sean Smith. Cooper has very solid coverage.

Same story as the last play, except this time Cruz catches a pass for 12 yards.

Nice play by Cooper here. The Giants have Randle against him and in man coverage. Randle fakes an out pattern and then darts back in (admittedly a somewhat lazy job of selling it). Cooper is right on his hip the whole way. Manning clearly wanted to throw to Randle, but had no chance.

Manning throws a quick-hitter to Nicks for seven yards, so it was tough to see how coverage was going to develop. For the record, Cooper was again covering Randle.

Once again, Manning has his mind made up pre-snap. He lofts a sideline pattern for Nicks which is well covered by Smith. On the left side, Cooper was on Randle but again, did not have to cover for more than a second.

Cooper is on Randle one-on-one and stays right with him on a seam route. Very physical at the line and rides him for a full five yards. Really a nice job by the youngster to show strength.

The Giants run a rub play to get Cruz free next to the sideline. Cooper does a nice job on the switch and takes Nicks, who is running a clearout to free up Cruz.

At the half, this is what we have: 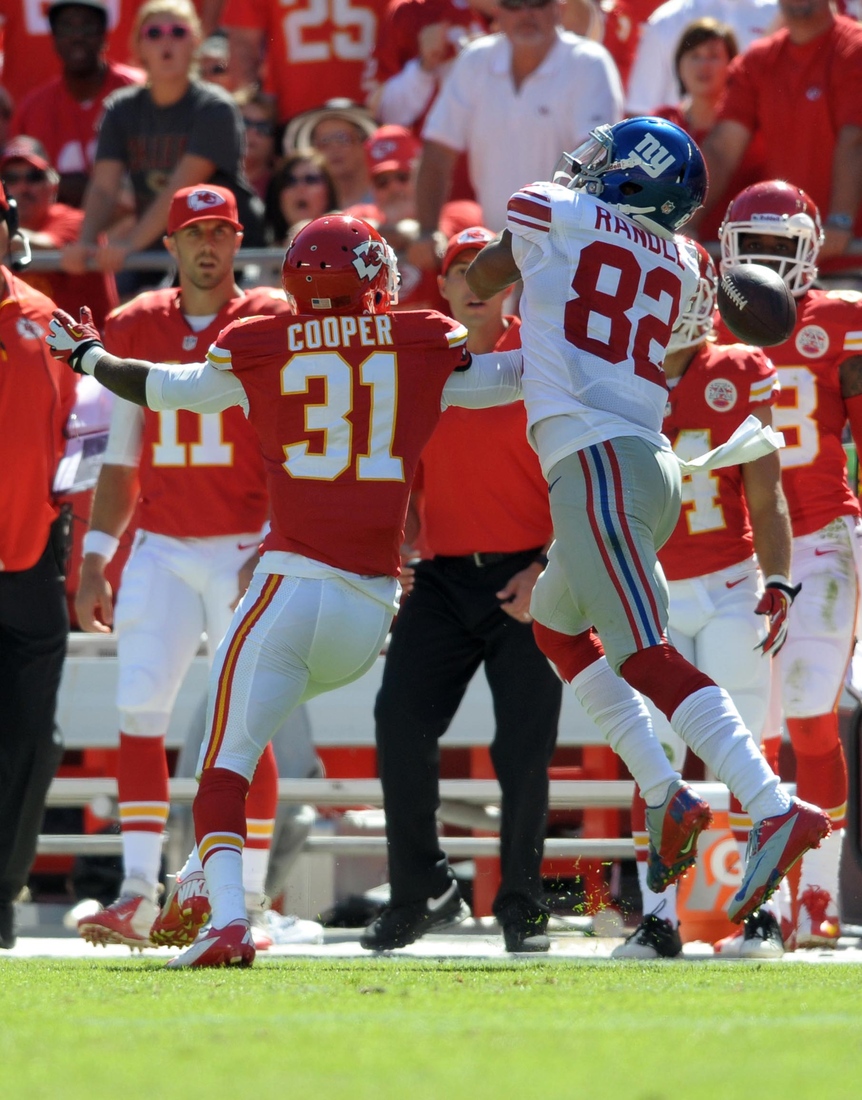 Cooper is again split left, guarding Nicks one-on-one. Again, Nicks is sent deep on a sideline route but Cooper stays with him stride-for-stride. The pass goes to Cruz who gets hammered by Eric Berry, resulting in an incomplete pass.

With Cooper playing off the line for once, Randle gets a clean release and heads downfield on a fly pattern. Manning gets flushed out on blitz by Husain Abdullah and throws it up for grabs. Cooper has help from Quintin Demps but Randle actually catches the ball before Cooper gets his hands in there to dislodge it. Excellent ball skills by Cooper to break up a huge play on third down.

Cooper is lined up wide left with Cruz. It's tough to see without coaches film where the route was headed because Manning had to get the ball out quickly with Tamba Hali coming in hard. However, one thing of note here. Cruz gives Cooper a couple of moves at the line, but Cooper never moves. With someone as shifty as Cruz, it's impressive that Cooper held his ground and waited.

On third and long, Nicks and Cooper lock horns. Nicks runs up the sideline looking for separation but once again has none. Watching the tape, it is becoming silly how many times the Giants tried to stretch the field on this kid, and he did not get beat. Play results in Manning throwing a pick to Demps.

Cruz runs a hitch route on Cooper and has a little space, but slips as Manning's pass sails wide. He probably catches the ball if he remains upright, but still only gains about three yards. It was pretty well played by Cooper.

Maybe my favorite of Cooper's plays all day. Manning gets Randle against Cooper man-to-man on the left side and throws to him on a go-route. Manning never looks anywhere else, certain of where he wanted to go. Cooper gets a good chuck about three yards off the line and rides alongside Randle on the inside.

This game is totally different if Marcus Cooper is not playing lights out football.

When the ball gets close, Cooper swings his head around and puts his right arm right between both of Randle's. It is a thing a beauty, and an incompletion to force a punt. This game is totally different if Marcus Cooper is not playing lights out football.

Nicks is lined up on the left side against Cooper and Manning sees it. The two-time Super Bowl champ makes a throw behind Nicks, who adjusts to make a really nice grab despite tight coverage from Cooper. However, a holding call against Tamba, the rarest of all penalty calls, brings it back.

Randle is lined up against Cooper this time but it is a screen pass. No real play for Cooper here.

Cooper gets Nicks on the left side who runs an up-and-out on 3rd and 17. Cooper stays with him but the pass goes to Cruz, who is tackled just short of first down yardage, setting up the Dexter McCluster back-breaker.

Incredibly, Manning decides to try Cooper again with Nicks on him to the left side. Cooper gets a great bump and rides along the inside of Nicks the entire play. Nicks finally cuts back toward the line for the throw but Cooper closes and almost intercepts the pass. Awesome work.

John Lynch can't stop talking about how incredible his performance is.

For the record, John Lynch was doing color commentary for this game and is about ready to kiss Cooper at this point. He can't stop talking about how incredible his performance is.

This time, beating the jam by faking an outside move, Nicks gets inside leverage on a slant route. The pass was there for Manning if he wanted it, but he threw to Cruz who picked up the first down.

Next passing play, and Randle tries to make the exact same move that Nicks just put on Cooper. The rookie learned quick and stayed right with him. Randle had inside position, but Cooper was all over him. The pass went incomplete to Nicks. 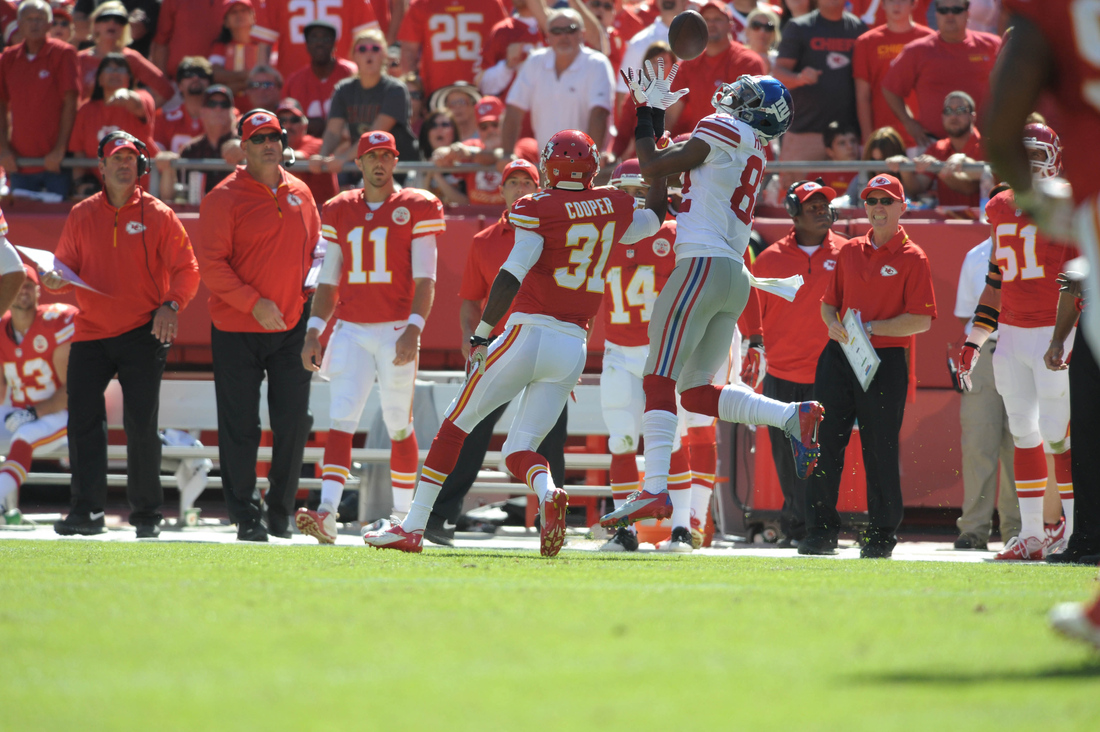 Without coaches film, I can't see on this play whether Cooper was in, but I assume he was since it was a dime formation. I would imagine he was, but I can't see one side of the field. If he was, he was playing off the line.

Randle is lined up against Cooper and runs a dig route just pass the first down marker. Shockingly, Cooper stays right on him and forces a throw to Brandon Myers, who is covered by Berry. Do you need me to tell you it ended up incomplete?

Manning scrambled up the gut with nobody to throw at. Cooper is in single coverage against Randle, who is blanketed on a curl route. No chance.

Nicks takes Cooper up the field on a clearout route, with the Rutgers man following right along with him. The pass went to Cruz, and it was once again incomplete.

Cruz goes down the field on Cooper to clear space for David Wilson. Cooper stays with Cruz, who at this point we can safely say has some wheels. Wilson catches a pass for six yards and gets tackled by...Dontari Poe.

Randle tried his luck against Cooper and has none on a curl route. Cooper stays with him and does a nice job driving on the receiver once his man puts a foot in the ground to make a turn.

Against Nicks, Cooper gets help over the top and rides Nicks' outside hip. Nicks makes a move inside and eventually gets some separation, but only after three of four seconds. Even still, the separation is not much and the throw goes to Cruz.

Couldn't see on this play who Cooper was going against, but he faced another deep route and stayed right with the man. He only needed to keep pace for about two seconds before Hali creamed Manning for a sack.

Cooper is on Randle out wide, who never really runs. Randle fakes like he is going to run a  route and then just blocks half-heartedly on a screen to Wilson.

Randle and Cooper lock horns once more, with Randle going up the sideline deep. If you feel like you have read this sentence 25 times, it is because you have. New York consistently tried to make lightning strike twice with the big play down field. They did not want to go after Sean Smith, and they had no success outside of Cruz's touchdown.

Fittingly, the final throw of Manning's day would go toward Cooper, who was matched up on Nicks. Cooper is right with him, and the ball is overthrown on what looks like miscommunication.