Through the first four games of the season much of the focus on the Kansas City Chiefs has centered around their defense, and for good reason. They currently have the NFL's top-ranked scoring defense, giving up an average of just 10.3 points per game. They also have the NFL's best giveaway / takeaway ratio (+9), and lead the NFL in sacks with 18. (By the way, the Bears, Giants and Steelers have just 14 sacks ... combined!)

But the biggest change coming into this season centered around quarterback Alex Smith. and the implementation of Andy Reid's West Coast Offense.

Your guide to the West Coast Offense 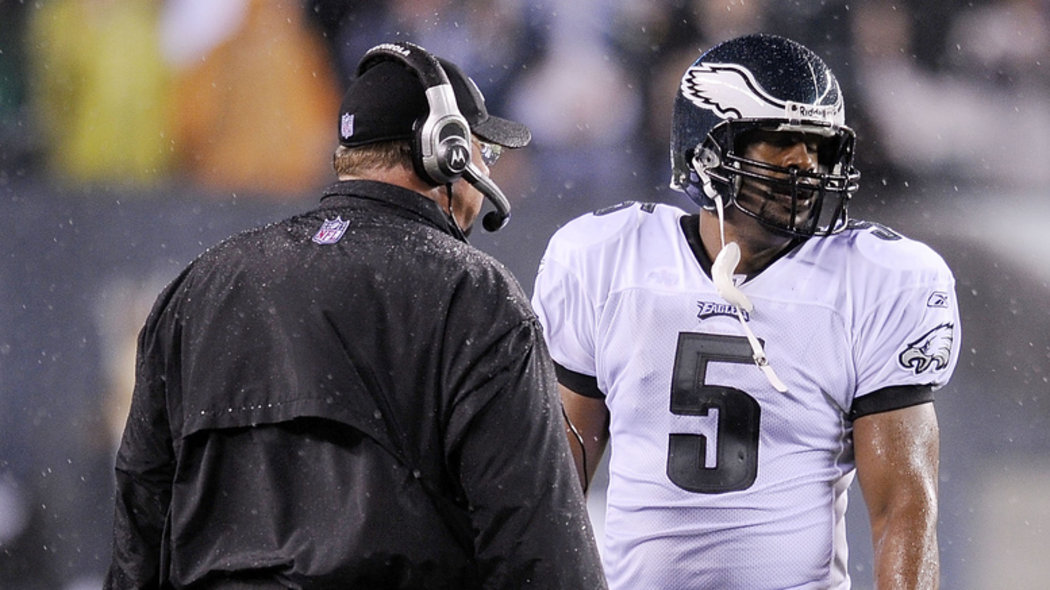 Most people know by now the West Coast offense is devised of a short, ball-controlled passing attack that's more interested in spreading a team out horizontally than it is vertically. We've seen this with Smith and the Chiefs offense through their first four victories of the season.

Most of the passes in Reid's West Coast offense are going to be caught between the hash marks and the numbers. And when you go back and watch the film you see the "levels" concept on most of the Chiefs route combinations. Most of the time it's a High-Low read for Smith, and this puts a lot of pressure on the linebackers and safeties to play disciplined, assignment-based football.

Here's a look at a High-Low read for Smith and the Chiefs offense against the Jaguars to start the season. 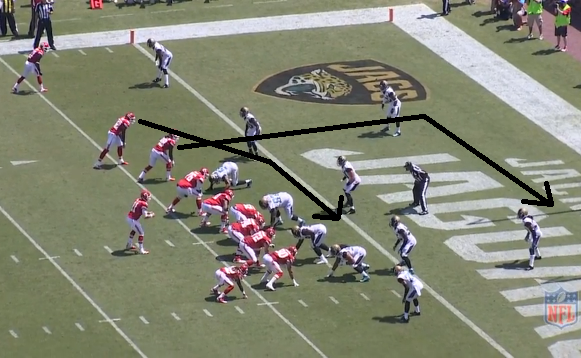 This is the Junior Hemingway touchdown catch that we all remember from the Jaguars game.

Dwayne Bowe takes the underneath "drive" route while Hemingway comes in behind him with the "dig". This is a basic "levels" concept for Andy Reid's West Coast offense.

Smith does a good job after the snap of holding off the front-side safety before coming back to Hemingway across the middle. 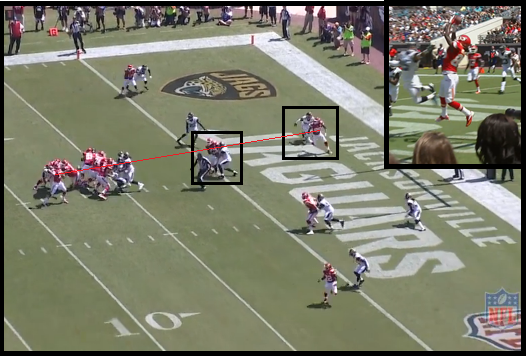 The linebackers have come up to guard the first "level", which has about four Chiefs routes right along the goal line. Because Smith wasn't staring down Hemingway the entire time, he has a lane to deliver the ball across the middle.

You can see the strong safety is just far enough away that Hemingway has a chance to come down with the ball. The ability to look off safeties is an underrated trait that good veteran quarterbacks possess. 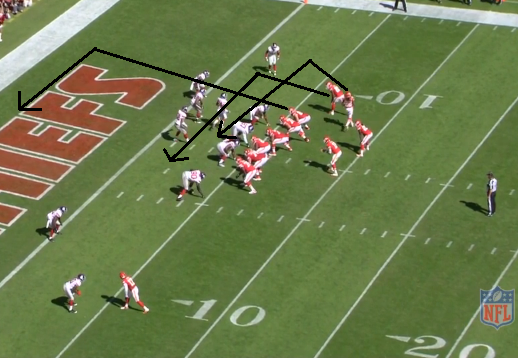 That play might look familiar because it's the same concept that was run for the Sean McGrath touchdown in the red zone against the New York Giants. But this time it was window dressed a little bit with the Dexter McCluster motion and subsequent "drive" route, combined with Bowe's "drive" route to make up the first level. 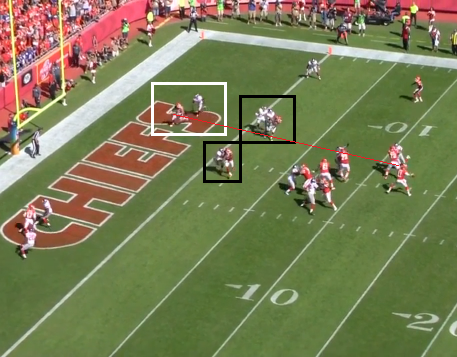 McGrath gets in behind the first level of routes and Smith finds a lane to throw him the football. This isn't about exceptional talent at these positions. They're out there making the plays and executing but these aren't clear-out, one-on-one jump-ball situations where talent overrides scheme.

That's what Reid has brought to the Chiefs offense, there's a distinct identity within the offensive system and it's working, and Smith is the perfect quarterback to execute these reads.

That's what Reid has brought to the Chiefs offense: a distinct identity.

It's also important to note that many of these routes and combinations are used throughout games from a variety of formations. There aren't that many different routes run through Reid's offense, but they're coming from many personnel packages and formations and that's window dressing.

Now let's take a look at another play that has different route combinations, but has the same general "levels" concept. 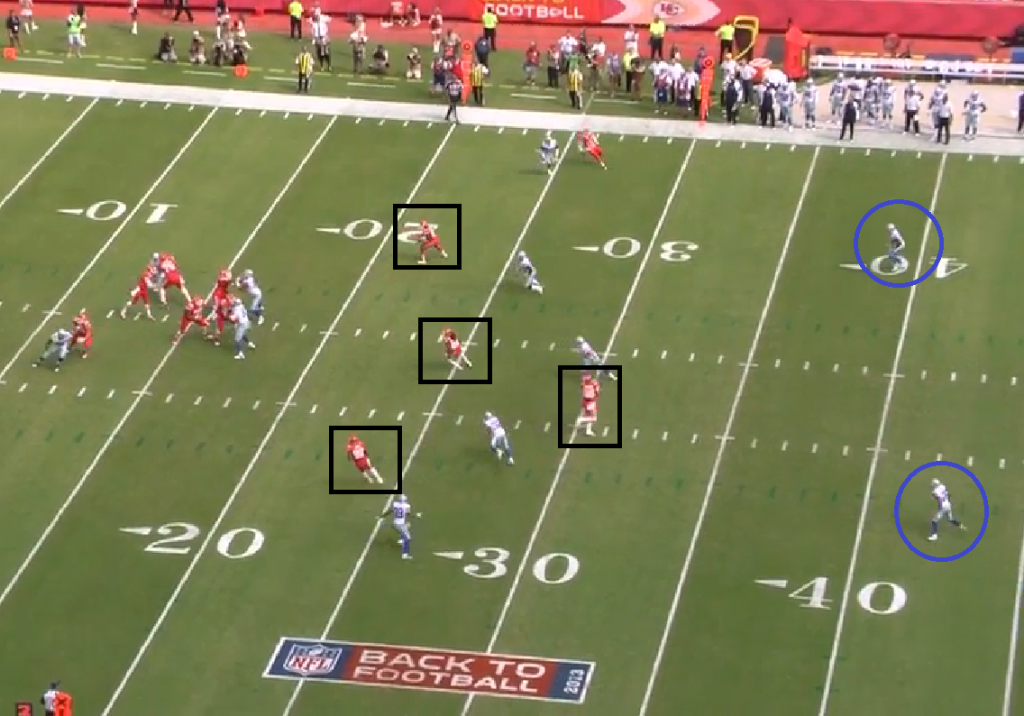 This particular play is against the Dallas Cowboys Tampa 2 defense. You can see the two-deep safeties keeping everything in front of them and Sean Lee, the Cowboys middle linebacker, getting deep in his drop to try and take away the seam route from the tight end.

These are three 'hook' routes and a seam down the middle from the Chiefs offense. This is another 'levels' concept as Smith is simply taking what the defense is giving him. Lee carried the seam route and left the dump underneath open for a six-yard gain.

The next route combination you'll see a handful of times from the Chiefs offense every game and that is the 'Tare' route, a term learned from Xs and Os guru Matt Bowen.

Here's the 'Tare' route against the New York Giants. 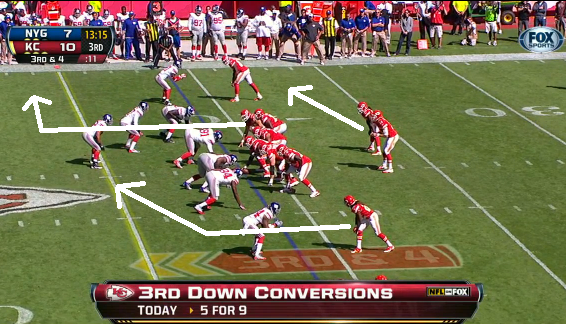 The running back (although it can be run from different formations) runs a flat route immediately, while the tight end runs an out-route and the backside slot receiver runs a slant.

You will see this play from the Chiefs several times a game. This one went to McGrath for a big gain where he leaped over the safety to pick up the first down on third down. 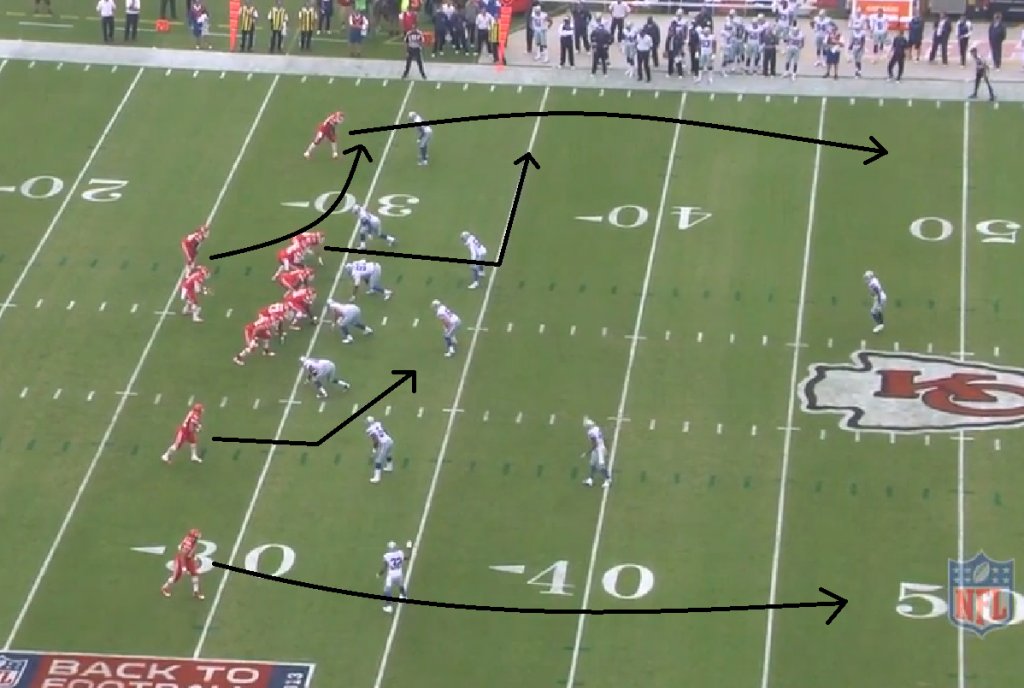 Here's the 'Tare' route against the Cowboys.

The Cowboys look to be in man-under defense with quarter-quarter-half behind them. This is another 3rd down play where the Chiefs have a manageable amount of yards to pick up.

The play before this against the Giants was 3rd-and-4 and so is this one. Maybe it's something to look for in the game this weekend against the Titans whether or not the Chiefs run this 'Tare' route on 3rd-and-4 to 6 yards. 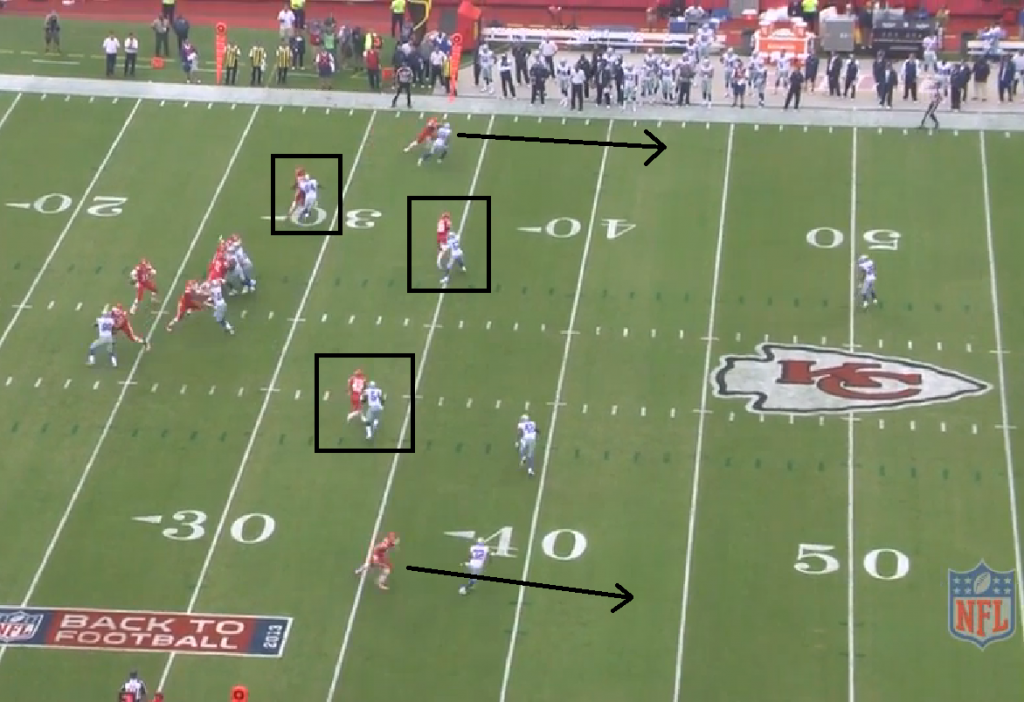 The pass is completed to McGrath on the out-route for a Chiefs first down.

This next play is another 'Tare' route against the Philadelphia Eagles although the Chiefs mixed it up a bit with the backside slant with Avery on this particular play. 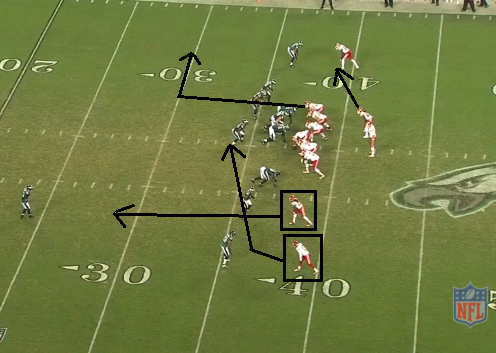 Given the success that Avery was having running these hesitation slants across the middle vs. the Eagles, it's not surprising the Chiefs would have a wrinkle in their 'Tare' concept to let the outside receiver come across on the slant.

But again, it's Charles to the flat and the tight end on the out-route. 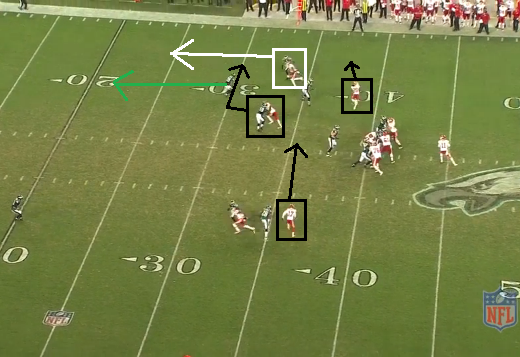 You can see that Charles is covered by the linebacker in the flat (kind of, white box is covering part of LB up), and McGrath is fighting off man-coverage to get to the top of his route and break to the outside.

Avery is covered across the middle (probably the only time he was in this entire game) and the receiver at the top of the screen (white box) is responsible for clearing out the cornerback and safety, which he does (illustrated by the green arrow). 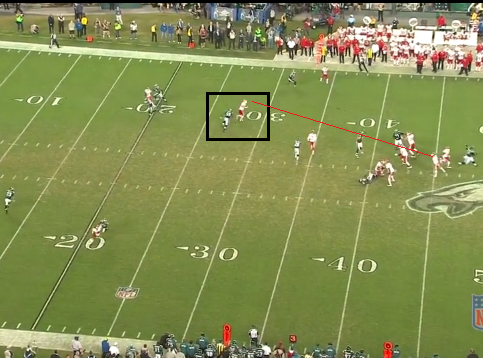 This opens up the out-route and allows the Chiefs to pick up the first down on the 'Tare' route ... again.

The final play sequence that we'll go over in this article centers around Dexter McCuster and the Chiefs use of him on a third down play against the Giants.

This has a little bit of everything and if you only watch the play once or twice, many of the intricacies may pass right by you without you even knowing it. This play is about scheme, timing, precision and skill set. 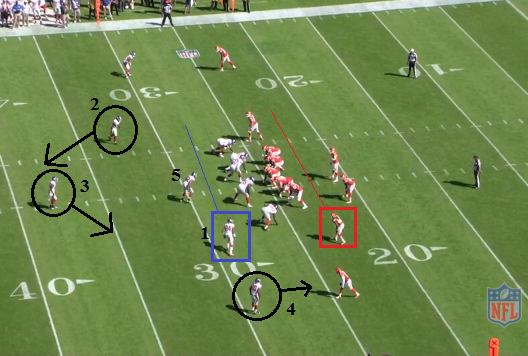 The first thing you're going to notice on this third down play is Dexter McCluster going into motion to the top of the screen. This causes the entire defense to rotate. (Using #'s for defenders for simplicity while reading). This also tells Smith they're in a zone defense.

The No. 2 defender moves to the single-high safety look while No. 3 comes down and plays the out/flat route on the weakside of the formation. Because No. 4 lost help to his inside with the motion he moves up to press coverage. If he stays off and Smith gets a quick hitter to his receiver and he misses the tackle, it's a touchdown. No. 5 is one of the linebackers responsible for the hook / curl route in the middle of the field. 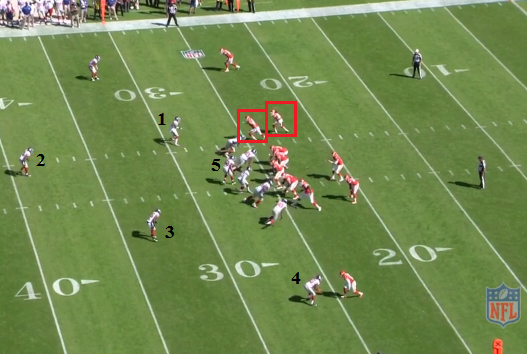 Here's the defenses look after the motion with McCluster and McGrath in a stacked slot formation. The key to this play is getting No. 1 and the top cornerback (not numbered) to open their hips.

McGrath is going to run a seam-route to and carry No. 1 with him up the field. 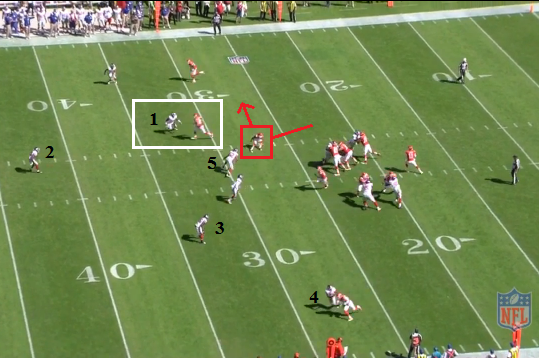 This is what's great about this play-call. The No. 1 defender HAD to open his hips and run with McGrath up the field, and he didn't see any reason why he'd need to help with the curl / flat on the top side, which he's also responsible for, because McCluster's initial route was angling toward the middle linebacker (No. 5) --who's responsible for the curl / hook in the middle of the field.

Without knowing for sure, the defense would probably rather have had No. 5 take McGrath up the field before passing him off to the safety and allowing No. 1 to play McCluster underneath for these very routes. That's another benefit to the presnap motion, it didn't give the defense much time to adjust to these kinds of things before the ball was snapped.

The timing between McCluster breaking off his route to head back the other way, the No. 1 defender opening up to carry the seam with the tight end and the cornerback opening to protect the deep throw on the receiver allowed this play to happen. 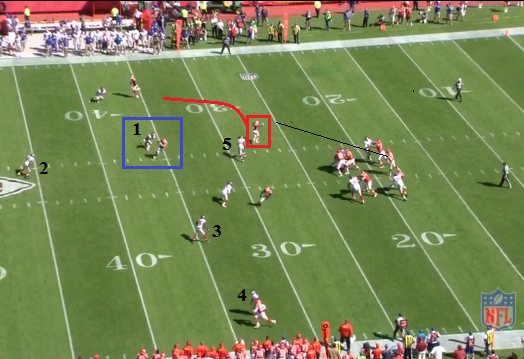 While it looks like No. 5 was the guy who missed this play, the truth is there are very few linebackers who could make that play, on that route, against a player with the quickness of McCluster.

On this play Reid and offensive coordinator Doug Pederson used McCluster in the perfect situation to emphasize his skill-set, while the offense executed the play with perfect timing and precision.

This 'levels' concept isn't new to the NFL ... but that doesn't mean it's easy to defend.

This 'levels' concept of the Chiefs passing game isn't new to the NFL by any means, and it's not as if teams aren't aware of what they're trying to do or how they're trying to do it. But that doesn't mean it's easy to defend. As soon as safeties start creeping down on those crossing routes it's a simple double-move and you're wide open down the field. That's something we'll probably see at some point during the season.

But if you're looking for something to watch for on Sunday against the Titans, check for the 'Tare' route on 3rd-and-medium and the 'levels' concept when Smith drops back to pass, especially in the red zone.