We're six weeks into the 2013 NFL season and KC Chiefs rookie and No. 1 overall pick Eric Fisher has played five games. Has he improved? Nick Jacobs takes a look at Fisher's Week 6 performance against the Oakland Raiders.

Share All sharing options for: Six weeks in: Chiefs' Eric Fisher is inconsistent, but showing improvement

It has been a hot topic since training camp: Why is Eric Fisher struggling?

Some see Fisher as a weakness on the Chiefs offensive line. On this very site back in April, I said the following:

"He is a well-balanced tackle. Fisher has a mean streak in him that you can't coach. He has some technique work to correct in his pass protection but he has the strength and bend to compete in the NFL immediately. I have fewer concerns with him than the other two tackles."

Now here we are in the middle of October, with an off-season program, training camp, four pre-season games and five regular season games under his belt (one missed due to a concussion).

So, where is he now?

I went through the entire Chiefs offensive series against the Raiders in Week 6. Here is the good and the bad of what I was able to find....

Alex Smith is sacked for a 7 yard loss 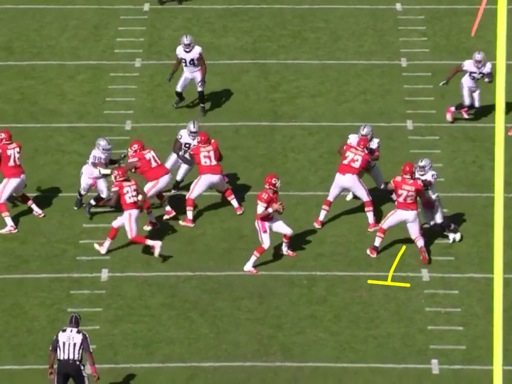 On this play, the first problem Fisher has is he lets the defender get inside his chest first. What he has to do is counter with a re-anchor to not get pushed back any further. He also needs to continue trying to disengage the defenders hands. So he can regain control of the player.Fisher gave up the inside for the sack. 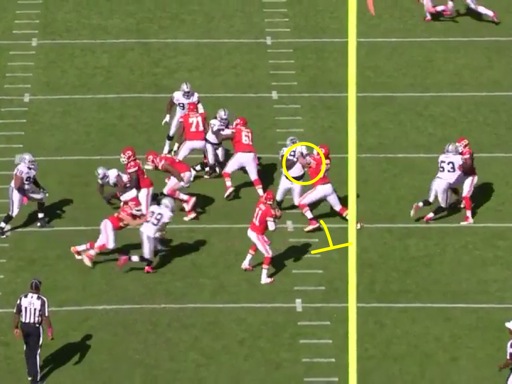 I illustrated this play to show the improvement and power Fisher possesses. He gets his hands inside the defender for a good punch. His stance is improved but not perfect by any means. He gets the job done with his strength and athletic ability. 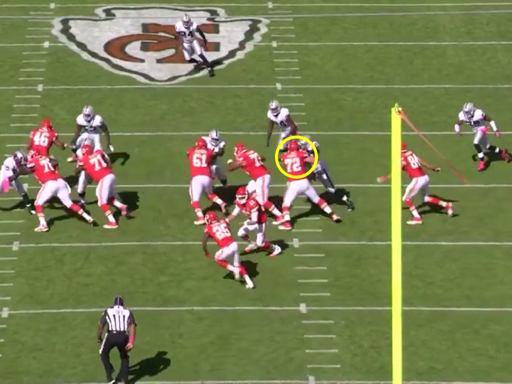 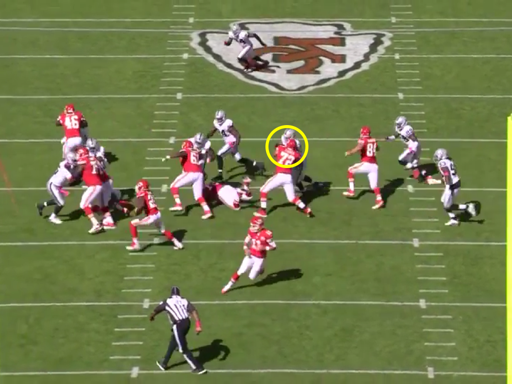 I wanted to show Fisher's ability in the back side on run plays. On this play, I was impressed at how quick his reach steps were. He got good position in reaching the defender and didn't allow him to flow down the line of scrimmage. Backside Fisher allowed Charles a lane if he needed it. He didn't get beat across his face by the defender. 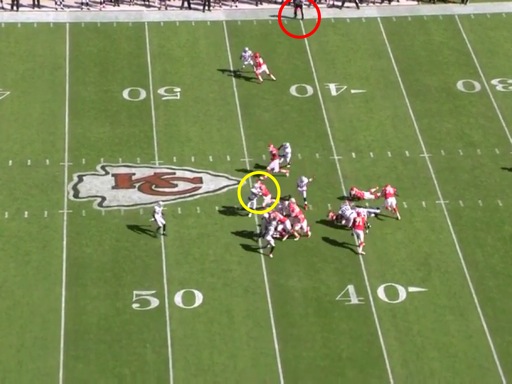 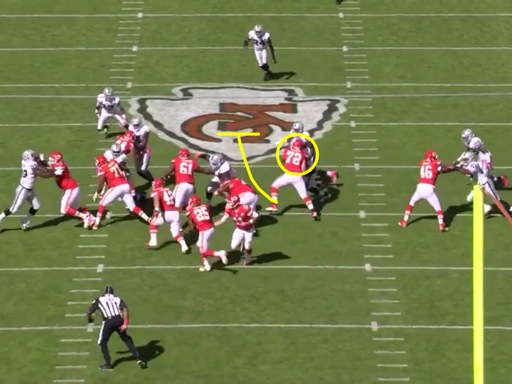 This is my favorite play from Fisher. An offensive lineman who is relentless in the run game, and will block till the whistle, makes for a successful run game. These two photos show his desire to dominate. It is not enough he pushed him across the line of scrimmage and isn't getting beat across his face. He wants to take his defender and drive him to the endzone. He kept good position on the play and never quit. You can always build on that.

Alex Smith to Jamaal Charles for a 24 yard gain 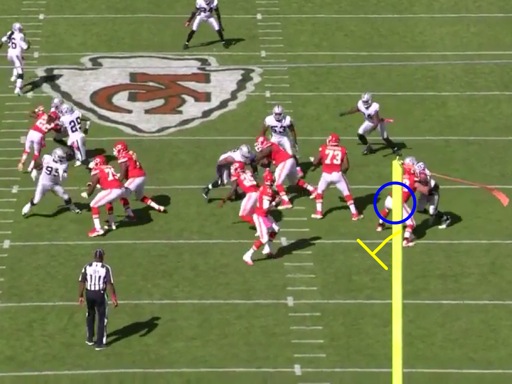 This play shows that Fisher understands the right bend and set for his pass protection. Ideally you want to see his hands out punching into the defenders chest but it shows an understanding and ability to correctly set in pass protection. You can build off that. 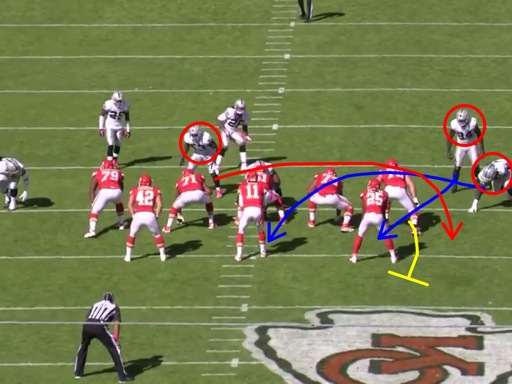 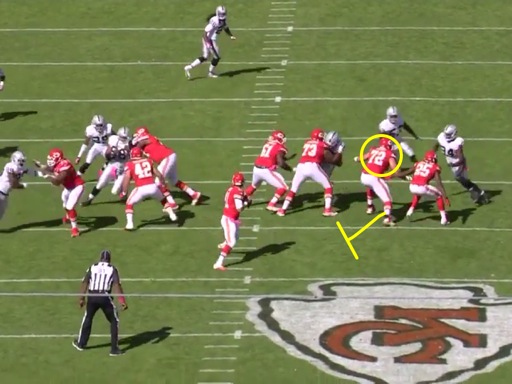 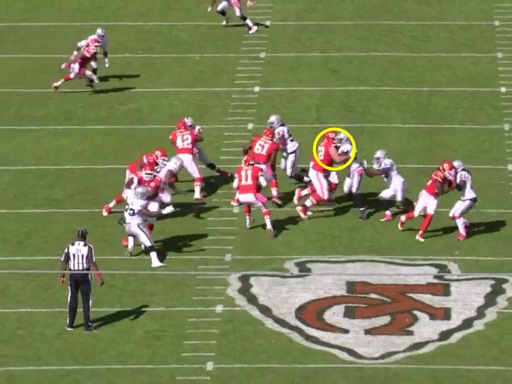 The first photo shows the stunt the Raiders ran against the Chiefs offensive line. Fisher does a good job of not getting overwhelmed. The DE shaded outside of him attacks the A gap on a twist. He picks up Burnett and helps hold off the backside blitzing middle linebacker. His hands need to be inside for his punch and he needs a better base but that will come with time.

Alex Smith to Jamaal Charles for a 14 yard gain 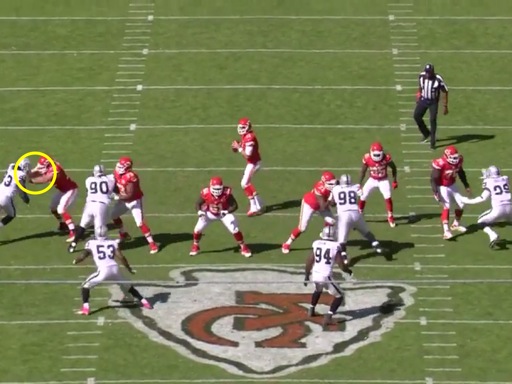 This play shows his understanding and ability for proper hand placement. He has his hands extended for the punch. A much better base and his head is up. This is one of his better pass protection sets.

Jamaal Charles up the middle for a touchdown 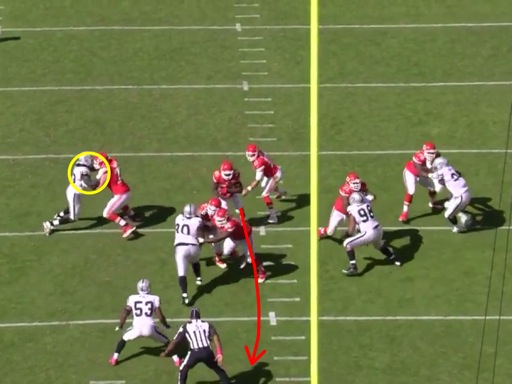 This is a quick hitting draw. The tackle's job is to show a high hat, go into a pass pro set then get their man out of the way for the running back to hit the second level. Fisher does a good job of turning his defender so Charles can cut off his rear if he needs to.

Jamaal Charles off tackle for the touchdown 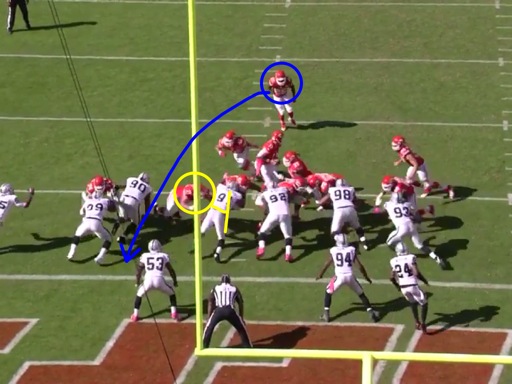 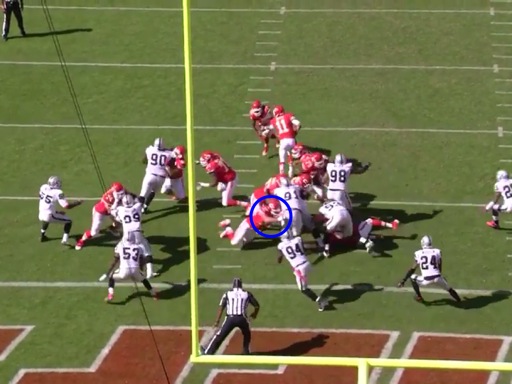 The final play of this breakdown is the touchdown. The played is designed to run off tackle. So Eric Fisher's number one job is to create a hole. Fisher's job on this play is to down block the tackle. So the fullback can kick out the defensive end. Jeff Allen and Sean McGrath can pull through the hole and finish the blocks off. Fisher has solid down block and allows Sherman, Allen and McGrath to do their job.

It's like marinating a steak, it just needs some time to reach perfection.

Overall, Fisher had a solid game when you watch him. You see the improvement from the pre-season to Week 7. He is going to have his hiccups as the season continues, but the only way he will get better is if he is on the field. In pass protection, Fisher is starting to use the technique his coaches have taught him. He will use 1 out of 3 correctly, then 2 out of 3. Once he is able to hit 3 out of 3, he will be the shut down tackle people are hoping for. It's like marinating a steak, it just needs some time to reach perfection.