Dear Case Keenum, meet the No. 1 defense in the NFL

Someone needs to warn you. Might as well be me.

Share All sharing options for: Dear Case Keenum, meet the No. 1 defense in the NFL

How's it going? I hope you had a nice summer. I just heard the news. Congratulations! Getting a chance to start for an NFL team in just your second year in the league (after being an undrafted rookie) is a major accomplishment. You should be proud!

I suppose I should introduce myself. My name's Seth Keysor, but my friends call me MN ('cause I'm from Minnesota. I'm super original). I'm a very passionate Chiefs fan and sometimes write stuff about them.

Why am I writing you? Well, Case, I'll get to that. For now, let's talk about you.

I took a look at your college stats, and good grief they're impressive. You passed for over 5,000 yards three different times in college! That's an amazing accomplishment, Case. Good for you. As far as I can tell, you set multiple records over the course of your collegiate career. That alone is enough to hang your hat on.

Case Keenum will start: The view from Houston 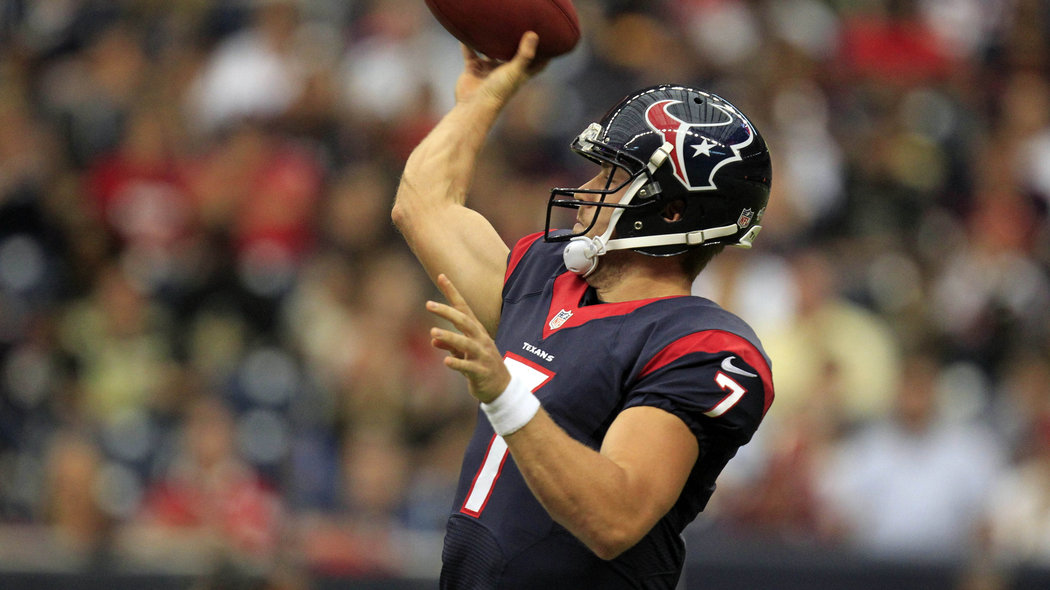 Texans fans at Battle Red Blog react to the news Case Keenum will start on Sunday at Arrowhead.

But you weren't done yet. I see that this preseason you performed pretty well! As best I can tell, you were 43 / 63 with three touchdowns and no interceptions. Well played, Case! I can see why Texans fans might be excited about you.

And I see you've accomplished this despite having some obstacles in your path. I took a look at one of your draft profiles, and according to them you had "too many negatives" to be considered a serious prospect. But you've showed them! You've made it! You're in the dance, man. You've got your shot. You're Moonlight Graham being called out of the dugout. I genuinely wish you the best of luck!

Of course, that doesn't really answer the question as to why I'm writing to you. I suppose at this point it seems more creepy than anything else (that's kind of my thing). The reason I'm writing you is something I saw in your scouting report:

Case, I feel that it's my duty to warn you what you're about to experience. This will be your welcome to the NFL, and I really do want you to be prepared. So I thought I'd introduce you to a few of your opponents.

This is the guy who will be coming at your blind side most of the game. He's... well, a tad intense. If you see anyone with blood dripping from their visored face-mask, it's probably Tamba. He's a relentless, unceasing, untiring pass rusher who employs MMA hand-fighting methods to dismay and confound would-be blockers.

Watch your blind side. I cannot say this earnestly enough. I know your LT Duane Brown is a stud. I also know that Tamba (per PFF) has 40 quarterback hurries this season. Through six games. Think about that. That's 15 more than the next guy up. If you don't want those hurries to turn into life-altering encounters Tamba.

To fully understand the nature of Tamba Hali's style of play, I'll leave it to Quint to explain. That about sums it up.

If you were hoping for better news on the other side of the line... sorry, man. Remember how I said Tamba is first in pressures? Well, Houston is second. He's basically just like Tamba ... except faster, with longer arms.

The good news is you'll see him coming. The bad news is he's absolutely coming. Unless you've got two blockers on him all day, he's going to get to you. But don't believe me. Here's what Ivan Drago has to say about Houston:

And in case you're thinking, "That's ok, I'll just step up into the pocket," well, you should really know about this guy, too...

How do I describe Dontari Poe? Well ... remember when you were a kid playing Mike Tyson's Punchout? And you finally, after fighting one guy after another, got to Mike Tyson? And he was gigantic like everyone else, but he was SO FAST and had so much power in his punches that it didn't seem fair?

That's pretty much Dontari Poe. He's 335 pounds, but moves like he's about 40 pounds lighter. His strength is unbelievable, his speed is unfathomable, and he never comes off the field. Like, ever. Just to give you a quick preview of what Poe could do to you, I found some footage of him on his last trip to New York City.

There are a lot of guys I really should warn you about, but I don't want to take up your whole afternoon. So very quickly...

The Chiefs cornerback trio of Sean Smith, Brandon Flowers, and Marcus Cooper is arguably the best in the league (in case you want to pick on the rookie, just know that cost Terrelle Pryor an INT last week).

Tyson Jackson is one of the strongest men in the NFL.

Eric Berry is only afraid of one thing (and unless you grow two extra legs and gain a thousand pounds, it's not you).

Quintin Demps is the silent assassin. No one talks about him, but he keeps making backbreaking plays. Make a stupid throw and he'll track it down. Three straight weeks with a pick.

Eric Berry is only afraid of one thing (and unless you grow two extra legs and gain a thousand pounds, it's not you).

Akeem Jordan has devoted the last six weeks to showing Chiefs fans they shouldn't have underestimated him.

Mike DeVito lets you forget about him ... then destroys your RB on a run to his side.

Kendrick Lewis is trying to prove all the haters wrong, and doing a fine job of it.

It might seem like I'm trying to discourage you, Case. I'm not. You sound like a really nice guy, and your name is very fun. I just want you to walk into Arrowhead with your eyes wide open.

Oh ... about Arrowhead. Um ... yeah, you should probably go ahead and spend the rest of the week with headphones on and cranked all the way up. Because you're going to go deaf on Sunday if you don't.

Now Case, maybe you overcome all of this and play a great game. If so, my hat is off to you. But as things stand, you are making your first start under literally the most difficult circumstances your coach could have imagined. I just wanted you to be warned.

Welcome to the NFL, kid.