AP contributor Herbie Teope recaps the day at Arrowhead as the Chiefs defense stepped up big and beat the Raiders, 24-7. Read more of Herbie's work at ChiefsSpin.com.

Share All sharing options for: Kansas City Chiefs defense in one word: Destruction

The Kansas City Chiefs entered Sunday's game against the Oakland Raiders with 21 sacks through the first five games.

When the final second ticked off the clock at Arrowhead Stadium, the Chiefs had 31 on the season.

Ten sacks against an AFC West bitter rival. Ten sacks in a game.

"That is crazy," safety Quintin Demps said in the Chiefs locker room after Sunday's game. "I hope you all fantasy people started the Chiefs D."

Even other Chiefs players were unaware of the havoc the Chiefs defense put on the Raiders.

"I hope you all fantasy people started the Chiefs D."

"Ten sacks?" linebacker Derrick Johnson said. "I didn't know it was 10. I got about two of them. Everybody's trying to eat around here, everybody's hungry, everybody's thirsty. We're not done yet, 6-0."

Linebacker Justin Houston was observed in the postgame locker room informing his teammates what the defense had done. And the excitement of the team accomplishment filled the air.

"I just found that out," safety Husain Abdullah replied when asked about the sacks. "The big guys are eating up front. We got a lot of good pass rushers, we get in a situation where we get to pin our ears back and just go make plays."

Making plays throughout the game against the Raiders is what the Chiefs defense did, including Abdullah, whose pick-six late in the fourth quarter effectively ended any hopes of an Oakland comeback.

Demps also recorded an interception, his third in as many weeks, as did cornerback Marcus Cooper, who started in place of Brandon Flowers (knee, inactive). Sunday marked a second straight game with a pick for Cooper.

Nevertheless, 10 sacks started the party. The total is one sack off the team record of 11 and marked the second time in franchise history the team finished a game with 10. The other time it happened was Sept. 6, 1998, oddly enough against the Raiders.

Linebacker Tamba Hali recorded 3.5, splitting a sack with Abdullah; Johnson had two; Houston had one, which pushed his team-leading season total to 9.5; and safety Eric Berry and defensive ends Tyson Jackson and Mike Catapano each chipped in with one.

The game-changing destruction was on full display early in the fourth quarter.

Oakland started a drive at its own 18 and marched to midfield. On first-and-10 at the 50-yard line, a holding penalty moved the Raiders back 10 yards, and then a 12-yard sack by Hali and an 11-yard sack by Berry sack mixed in with a 5-yard delay of game penalty had Oakland facing an impossible third-and-48. 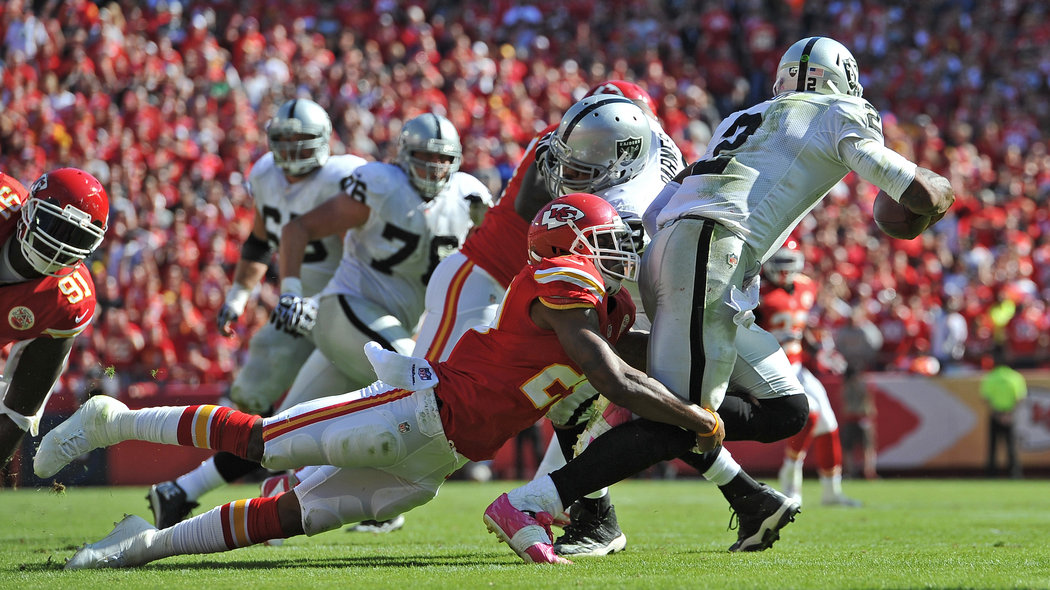 Still, for all the success the defense enjoyed, the offense continues to lack consistency.

Coming off Week Five where the Chiefs were 1-of-12 on third downs, the offense finished 4-of-14 (29 percent) against the Raiders and managed 216 total net yards on 61 plays.

The saving point through six games is the defense has a proven habit of keeping the game close and members of the offense appreciate their efforts.

"It's definitely beneficial to have a defense that's so good," fullback Anthony Sherman said. "On offense, we got to start moving the ball a little bit more and just executing a little bit better. Our defense keeps us in games and we find a way to win."

Wide receiver Dwayne Bowe said he knows how tough it can be going against his defensive teammates in practice. Bowe said he has fun watching them against an opposing offense and the defense more than met the challenge against the Raiders.

"We knew going in Terrelle Pryor is a great quarterback - he can run and get the ball downfield - but our defense played great, they contained him when they had to, they got 10 sacks and three interceptions," Bowe said. "It feels good for an offensive player knowing our defense got our backs when we need it."

Bowe's isn't alone when it comes to admiring what the defense is doing.

"Yeah, I watch it," quarterback Alex Smith said during his postgame media session when asked if he peeks on the field to watch the defense. "I love it. It's amazing."

In the meantime, the Chiefs defense continues to shine and hold down the fort while the offense attempts to find stability.

The defensive unit under coordinator Bob Sutton has already surpassed last season's sack total of 27 and allowed 65 total points through six games. Compare that number to the first six games of 2012 when the defense surrendered 183 points.

The biggest difference between the two seasons shouldn't come as a surprise.

"It's the coaches, I promise," Hali said. "We had the same team here last year minus a couple guys, and we're having this much success, so credit to the coaches."