The Chiefs defense had their signature moment of the season today against the Raiders: forcing Oakland into a ridiculous 3rd down and 48. 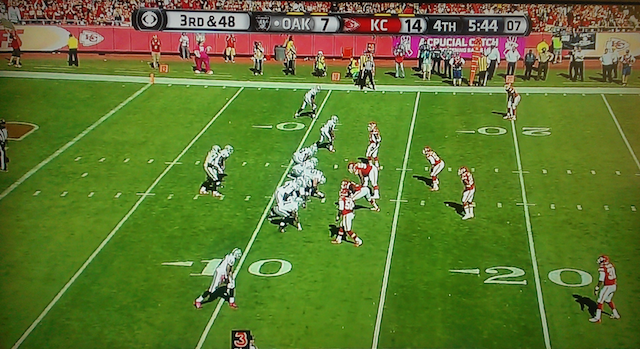 Here's how it happened:

In the 4th quarter with about 7 minutes to go, Oakland had a first and 10 from the 50 yard line. The Chiefs only led 14-7, and the Raiders were very much in the game, threatening to tie the score if they could get 50 more yards. But not only would they NOT get 50 more yards, they would actually LOSE an astounding 38 yards in the face of a fierce KC defensive stand.

On first and 10, the Raiders were called for a 10-yard holding penalty, backing them up to their own 40 yard line.

On first down and 20, Oakland quarterback Terrelle Pryor was sacked for a 12-yard loss. Second down, 32 yards to go.

Before the next play, the tremendous roar from Arrowhead's howling denizens forced the Raiders into a five-yard delay of game penalty. That backed them up to their own 23 and made it second down and 37 to go.

On the next play, Tamba Hali barreled around end, pressuring Pryor, who managed to evade him. But Eric Berry was there to finish him off for an 11-yard sack, to make it third down and 48. (Sure looked to me like Berry tackled him at the 10 yard line, which would have made it 3rd down and 50, but the ball was spotted at the 12.)

On the next play, Pryor's pass was incomplete, making it 4th down ad 48 yards to go, from the Oakland 12 yard line.

On fourth-and-48, punter Marquette King boomed a 46-yard punt-- a long punt that still didn't even make it to the first down marker.

Already, the internet is erupting with laughter at the Raider ineptitude:

Hopefully there will be more reporting on the Chiefs' defensive excellence that forced the 3rd and 48, after everyone gets done laughing at Oakland. The defense stepped up at a key point in the game and demolished the Raiders' hopes with an outstanding rally.