The Kansas City Chiefs didn't play perfect in Sunday's 24-7 victory over the Oakland Raiders but their 6-0 record says they are. KC's defense once again stepped up big, holding Oakland to just one touchdown and sacking Terrelle Pryor a whopping nine times. Jamaal Charles scored twice as the Chiefs extended their perfect record. Next week: Houston comes to Arrowhead. Make sure you check out the AP podcast going live at 7 p.m. Arrowhead time.

The Chiefs attempted a Guinness Book of World Record for crowd noise at a game. Seattle held the record at 136.6 decibels. KC got as high as 137.5 according to the Chiefs readings, making Arrowhead the loudest stadium on planet Earth.

Alex Smith was sacked on the first play of the game. Eric Fisher was beat.

Terrelle Pryor lined up in the pistol on the first play from scrimmage.

The pocket collapsed when Dontari Poe pushed up the middle, allowing DJ to get in for a sack on third down. 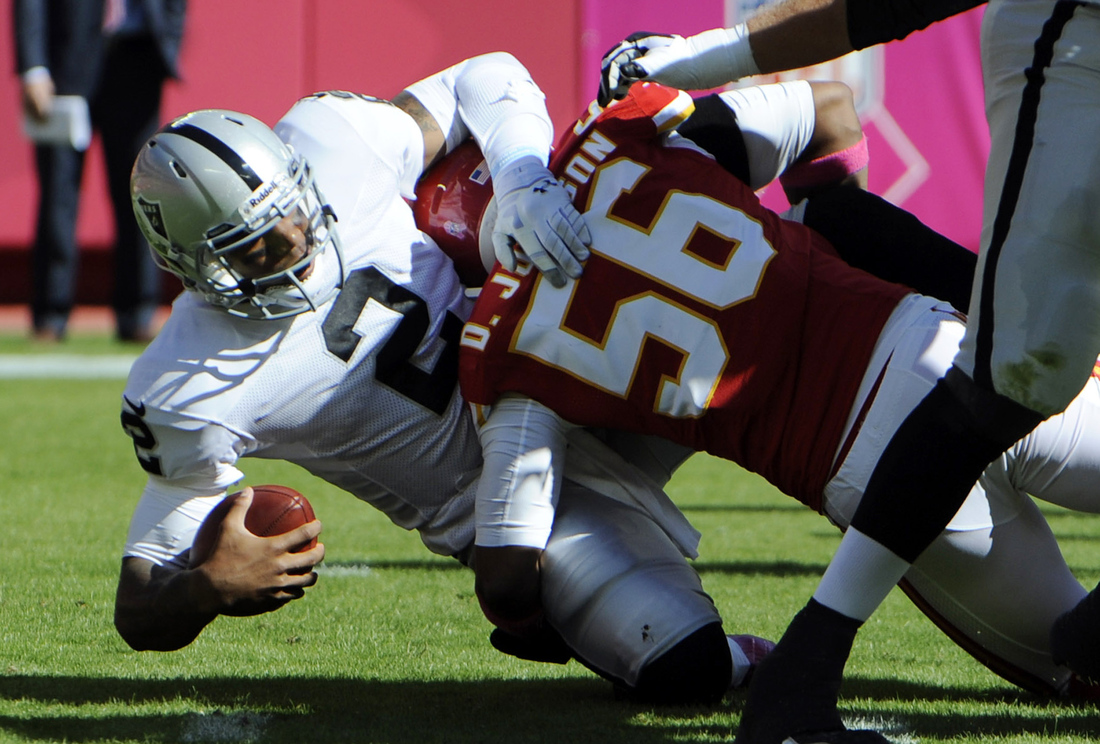 Blown protection by the Chiefs. Two Raiders came right at Branden Albert. He blocked one, the other came in unblocked for the sack.

Oakland moved into Chiefs territory on this drive.

Tamba Hali sacked Pryor. Again, the pocket collapsed. Husain Abdullah was credited with half a sack.

Knile Davis fumbled the ball out of bounds on one play.

Jamaal Charles had a 24-yard reception that put the Chiefs in Raiders territory.

On 3rd down, Alex was sacked (again).

Pryor had a 27-yard run down the left side. Tamba Hali dropped into coverage and got caught.

Jacoby Ford took a handoff from Pryor and wanted to throw it back to Pryor but the Chiefs defense sniffed it out.

Chiefs lucked out. Seabass's kick was well short. Chiefs O gets it back

The Chiefs offensive line is playing really, really bad. Alex can't do anything.

SCORE: Pryor found Denarious Moore over the middle for a 39-yard touchdown.

Dwayne Bowe got his first catch of the game, a first down.

The Raiders picked up a third down conversion. Frustrating to see when the crowd is so into it.

Tyson Jackson picked up a sack on Pryor, who ran from one end of the field to the other Tecmo-style.

Alex had a nice back shoulder pass to D-Bowe for 17 yards. Jamaal had an excellent blitz pick-up on the play.

Albert went down again with injury.

Alex had a pass near the goal line to D-Bowe that drew a penalty flag, setting the Chiefs up inside the 10.

SCORE: Jamaal Charles punches it in up the gut. Chiefs tie the game, 7-7. 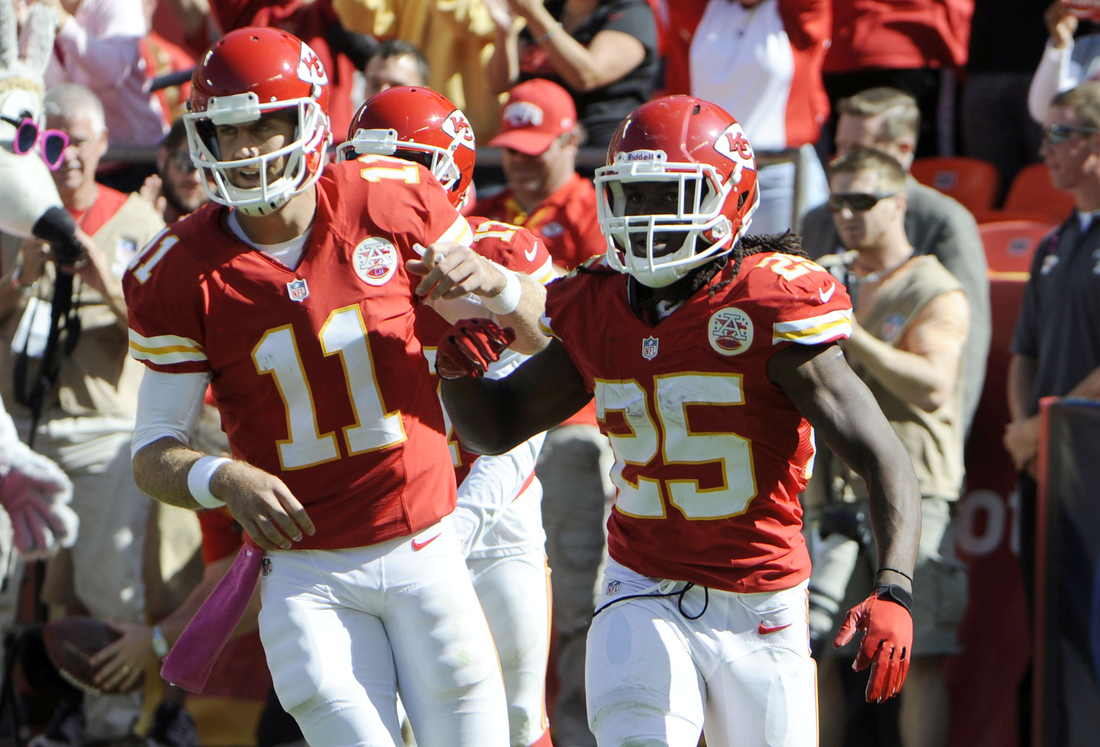 Dontari Poe came limping off the field. He was getting his leg looked at.

Chiefs ran it out before halftime. 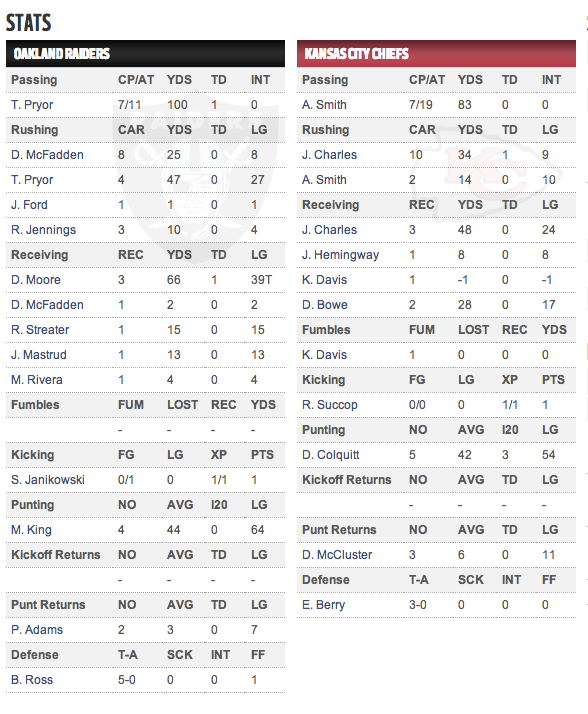 Raiders owner Mark Davis was smoking cigs in the concourse with fans at halftime.

GREAT fake pitch from Alex Smith on the option opens up the field for a first down run.

On a scramble to the right, Alex found D-Bowe for an 18-yard gain. Great pass from Alex as he had to give it everything he had while on the move.

How does Alex get out of that one? Avoids the pocket collapsing on him, picks up first down via his legs

TURNOVER: Donnie Avery fumbled in the red zone, giving it back to Oakland.

The Raiders, pinned in their own end zone, converted a 3rd-and-13.

Multiple delay of game penalties due to the Arrowhead crowd.

TURNOVER: Terrelle Pryor picked by Quintin Demps. Chiefs inside the 30.

KC started on their own 23-yard line after the turnover.

Dexter McCluster in as a running back, taking a pitch from Alex.

SCORE: Jamaal punches it in for his second touchdown of the day. Chiefs lead, 14-7. 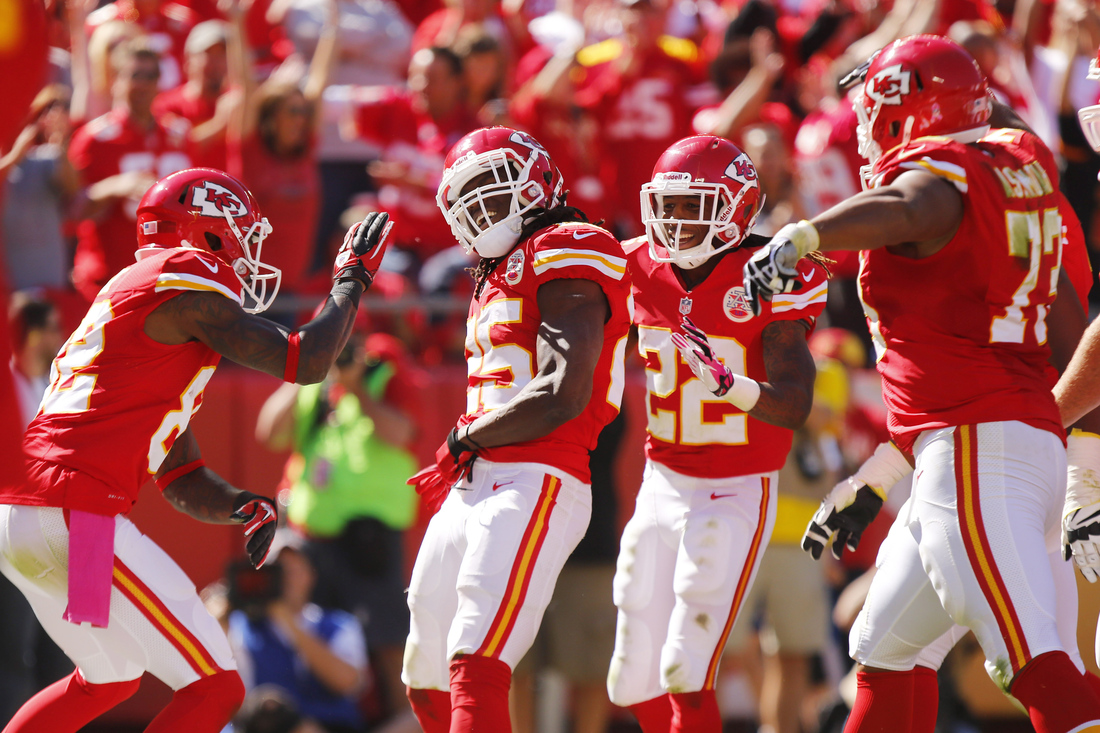 Terrelle Pryor was heavily pressured on third down, forcing an incompletion.

Tamba Hali sacked Terrelle Pryor on what looked like a designed run.

Marcus Cooper had a nice pass break-up on a deep pass.

After holding penalties, a delay of game and a pair of sacks, the Raiders faced a 3rd-and-48 (they did not convert). 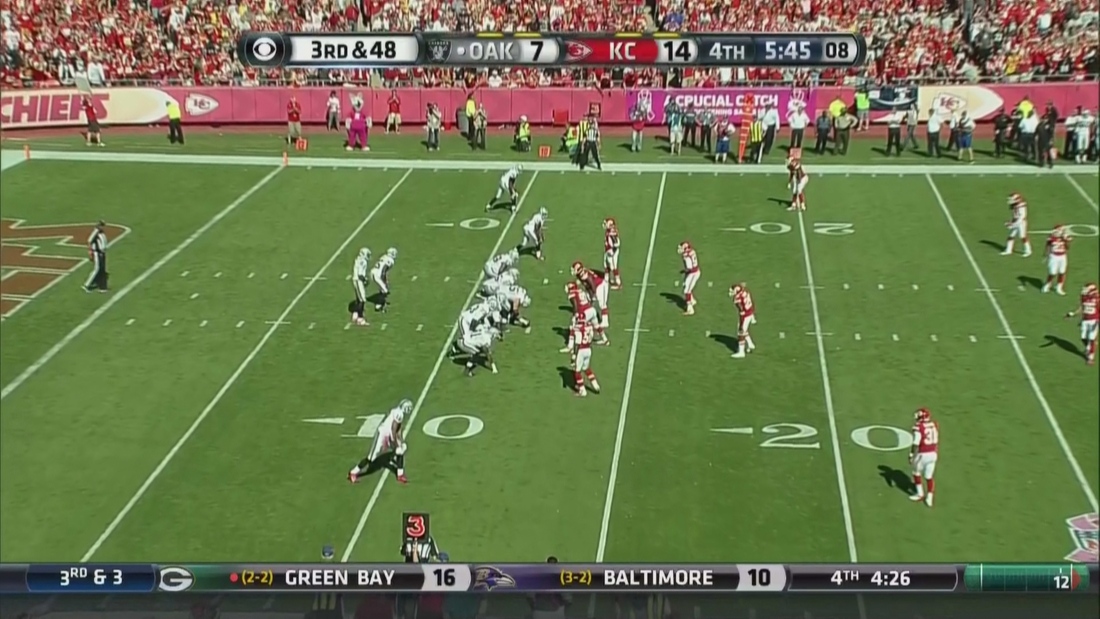 COOOOOOOOP! Marcus Cooper with the pick. Chiefs have it in Oakland territory

Ryan Succop kicks the field goal as the Chiefs burn the clock.

SCORE: Husain Abdullah picks off Pryor's pass and takes it to the house 44 yards. Chiefs lead, 24-7.

Dunta Robinson nearly got another pick-six but couldn't hang on.