Raiders vs. Chiefs 2013: 5 questions with the enemy

The KC Chiefs play the Oakland Raiders on Sunday and we spoke with Levi Damien, the voice of the enemy at Silver and Black Pride. Read on for our Q&A.

Share All sharing options for: Raiders vs. Chiefs 2013: 5 questions with the enemy

1. Name one player on offense the Chiefs will have to watch out for.

Terrelle Pryor. He has been the ultimate wildcard for the Raiders this year. As is usually the case, teams live and die by the play of their quarterback and such is the case for the Raiders and Pryor. He has added some passing proficiency to his game of late and only relies on his athleticism when he gets pressured, which happens a lot. We all saw the alternative with Matt Flynn in at quarterback and his inability to feel pressure. Pryor has a spider sense for pressure and once he gets into open space, he can outrun any defender.

2. Name one player on defense the Chiefs will have to watch out for.

Pryor has a spider sense for pressure and once he gets into open space, he can outrun any defender.

Lamarr Houston. He continues to be the best player on the Raiders' defense and the player opposing offenses fear the most. Even without a lot of talent around him to take some of the blocking off him, he still manages to get his pressures, sacks, and run stops. Double teams are required at all times because he is relentless.

3. What has Terrelle Pryor shown to demonstrate he could potentially be the future in Oakland?

Rapid progress. In just one off-season and training camp, he has gone from a guy who wouldn't stand tall in the pocket and couldn't hardly throw and on-target spiral to showing a great many skills in the areas in which he lacked. He had terrible mechanics and worked with three QB coaches this off-season and the work paid off big time. He still has a ways to go but if he keeps on the trajectory he's on now, he will earn the trust of his coaches by season's end that he could very well be the future for this team.

4. The Chiefs defense has been pretty good lately. If things go well for Oakland, where will the Raiders be able to beat the Chiefs? 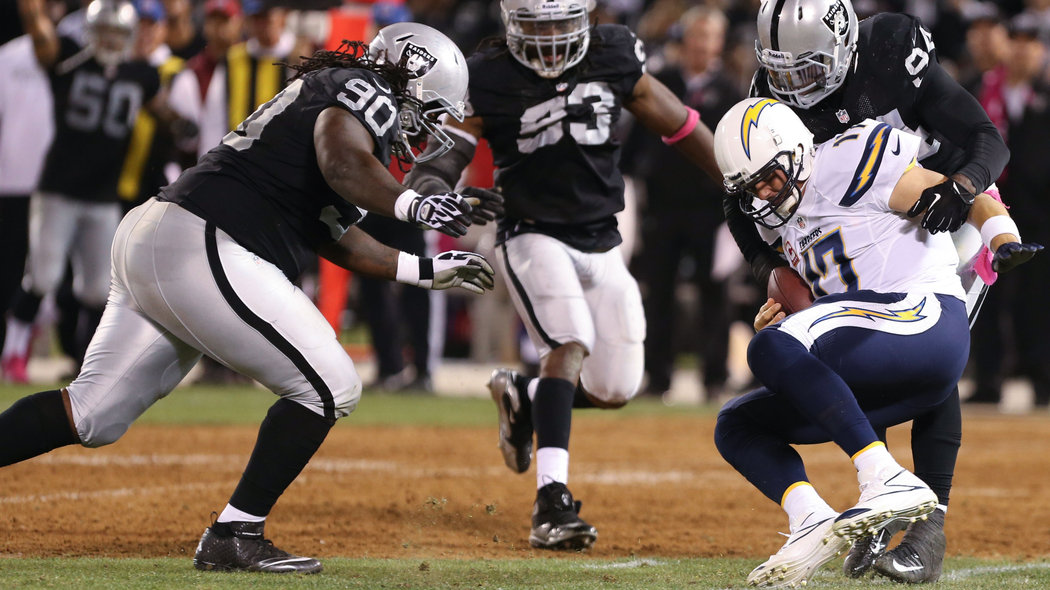 The key will be to spread out the Chiefs defense with a lot of motion men, play fakes, and a good mixture or hot routes and receivers pulling the safeties back with the threat of the long ball. Not an easy task against a talented and well-coached Chiefs squad.

5. Your prediction for the game.

Typically you can throw the records out the window when the Raiders and Chiefs meet. But with the differences in these two teams this year, I still think the Chiefs break the six game losing streak to the Raiders in Kansas City and pull out the win. Raiders should put up a hell of a fight as they always do. Chiefs win 20-17.