Give 'em the chop! 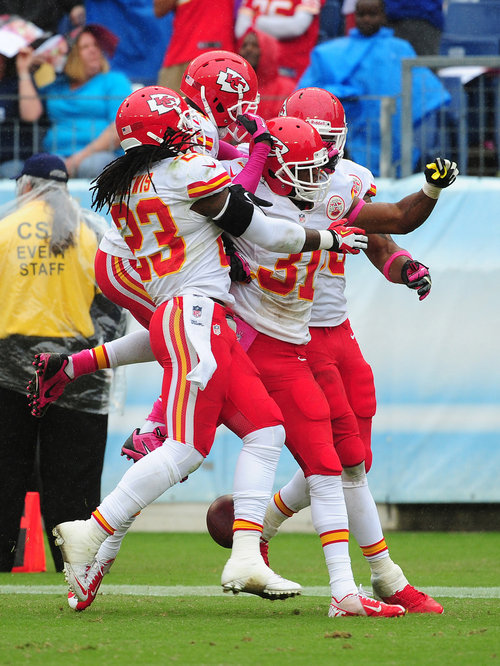 The Kansas City Chiefs took the field last Sunday against the Tennessee Titans in a bruising, ugly game dominated by defense, costly turnovers, and some questionable penalties. Yet again, the Chiefs were able to lean on the defense and special teams (thank you, Marcus) and grind out a tough road win. At one point, in the second quarter on Sunday, the Tennessee Titans had achieved zero first downs. When they finally got one, they drove down to the one yard line, where they failed four times to get the ball into the endzone.

Yards were at a premium against the Chiefs in the early going, but the Titans managed to claw their way back into the lead due to some broken plays and quarterback scrambles that made former statue Ryan Fitzpatrick look like the second coming of Michael Vick. Finally, the Chiefs were able to shut down Tennessee through some timely interceptions from new additions Marcus Cooper and Quentin Demps alongside some quality pressure from Tamba Hali and the run stopping of Derrick Johnson and Dontari Poe.

There were a handful of performances that were noteworthy and a couple turning points in the game. This week, we'll cover parts of the previously mentioned goal line stand by the defense, give some outstanding numbers, and gush about the versatility the defensive back rotation offers the Chiefs.

The Goal Line Stand - 1st Down 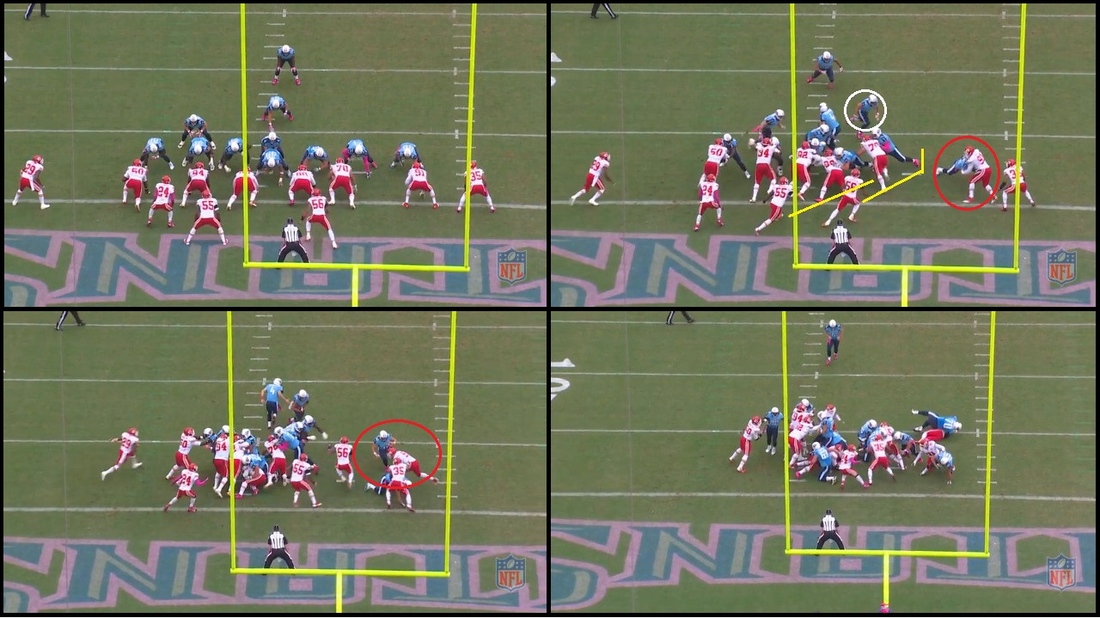 On 1st down, the Titans line up in a "Big I" package. Initially, there is a blocker set wide to the right of the defense. That blocker goes into motion and ends up lined up behind the right tackle. This shifts the linebackers toward the right side of the line, trying to create more space for the running back to run off the left tackle, expecially since there is a gap between Mike Devito and Tamba Hali on that side of the line.

After the handoff, both DJ and Akeem Jordan see the fullback (white circle) moving toward the gap that is even bigger because the left tackle blocked down on Devito. However, the fullback is actually trying to get to the edge to block Quentin Demps, because there are two pull blockers coming from the backside to block any linebackers in the gap. This is where the defense blows up the play. Tamba engages the tight end to his side, shoves him aside and gets upfield to meet the fullback, as shown in picture three.

This is right when the ball is being given to the running back. He now has Tamba setting the edge, so chances are good he can't get outside. DJ and Jordan are in the gap, but he's got blockers there. The first blocker gets to DJ (see the guy laying underneath a Titan in picture 4?), but that turns the back directly into Jordan, Demps, and Devito, who make sure he doesn't punch it in.

The Goal Line Stand - 2nd Down 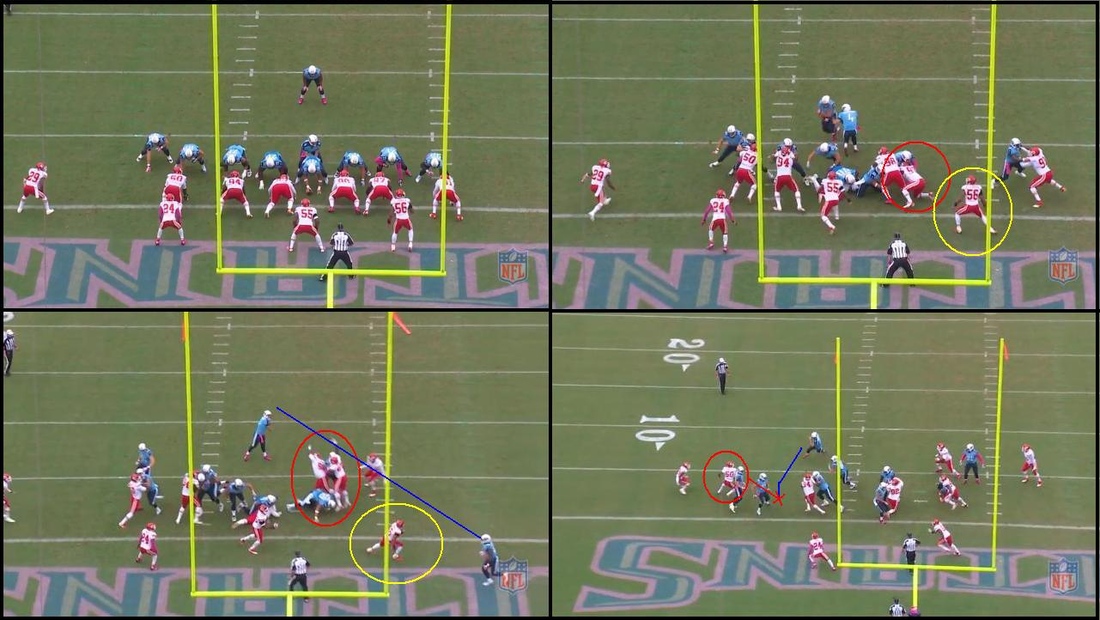 On 2nd down, the Titans bring out the "Jumbo" package. They want the Chiefs to believe that they're going right up the gut, but in reality, they're going to roll the tight end on the left side out into the flat. The ball is snapped, and at the point the handoff is faked, Jordan has bitten on the run, and Tamba is trying to go around said tight end to get to the running back.

Notice that the left side of the offensive line has blocked down to try to clear the throwing lane. Allen Bailey (red circle, 2nd picture) is underneath the pads of the lineman, and about to be pancaked. Instead, he launches upward, throwing the tackle backwards, and jumps up to swat a pass down in the 3rd picture. It's a good thing he did, because I'm not sure DJ can get to that ball.

The ball falls back to Fitzpatrick, who sees an opening and tries to beat Justin Houston to the goal line. He doesn't, and that brings up 3rd down.

The Goal Line Stand - 3rd Down 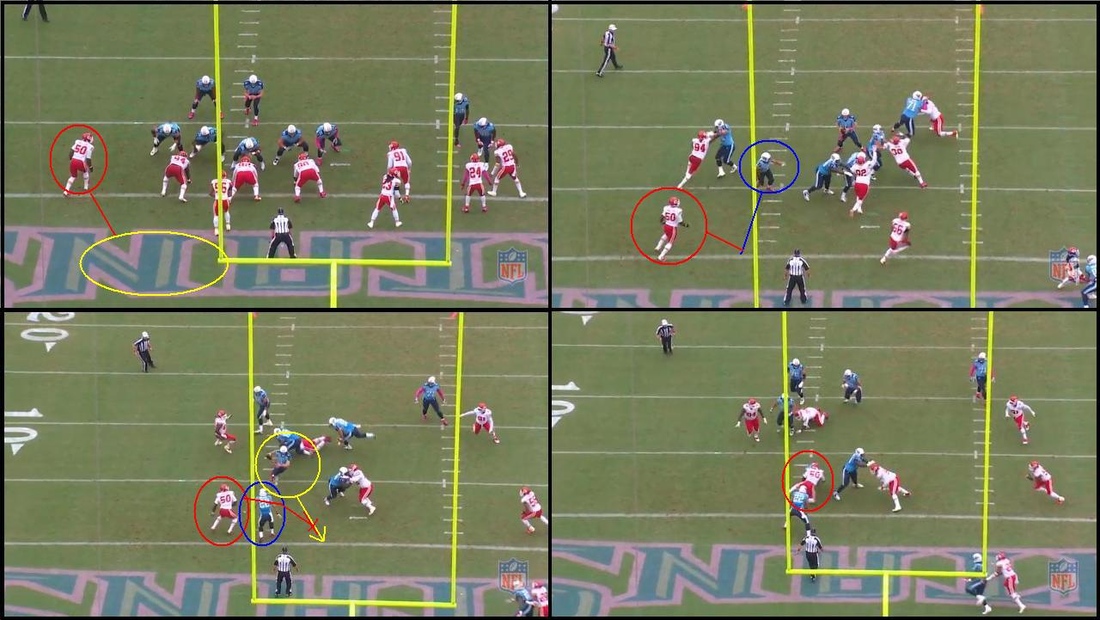 We could just call this "Justin Houston is awesome". This time, the Titans spread things out a bit, going with a single back and no tight ends. Fitzpatrick takes the snap and looks for the quick slant on the edge. When it's not there, he looks to check down to the running back in the middle of the field. He then clutches when he sees Houston step up in good coverage, then decides to take off up the middle.

Fitzpatrick has daylight, and Houston is the ONLY one who can even get close to stopping the play. He steps laterally to square up his shoulders to the quarterback, wraps him up solidly, then falls squarely on top of him to stop forward progress. That is a touchdown saving tackle after making the touchdown saving coverage. Fantastic play from a great player.

The Goal Line Stand - 4th Down 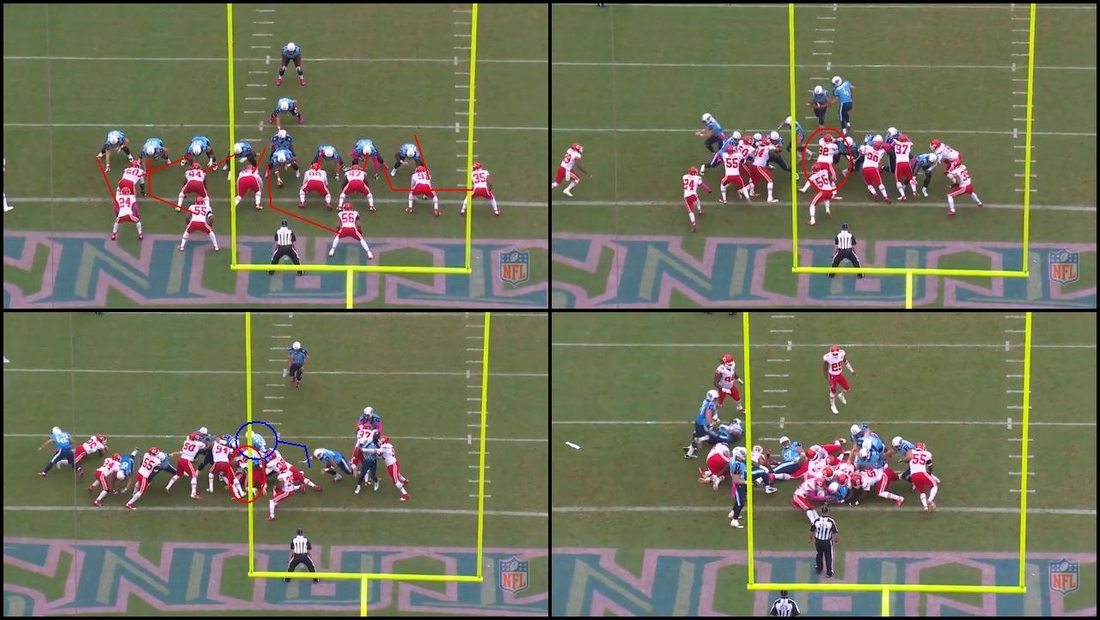 It's 4th down, and the Titans are back in the "Jumbo" package. They have decided they're going to go right at the teeth of the Chiefs defense and pick up that one yard on the ground. The problem? They single block Dontari Poe. DJ shoots the gap right behind Poe, and the fullback doesn't pick him up. Both Poe and DJ hit the running back behind the line of scrimmage, and the play is blown up.

Somehow, the referees don't blow the play dead, and the OL starts pushing the running back towards the end zone. The Chiefs gang tackle him just short of the goal line, and put a dominant stamp on the game. 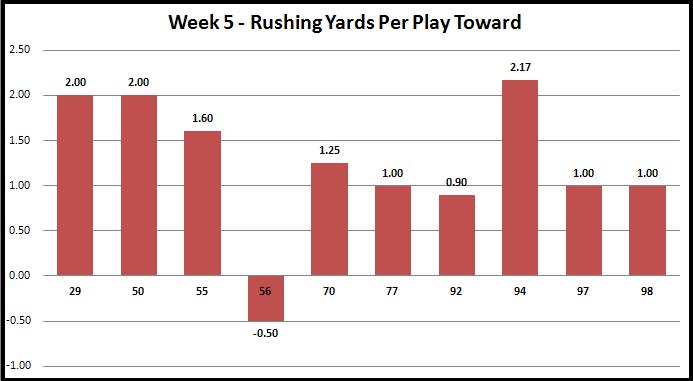 HOLY CRAP, DJ WITH THE NEGATIVE MARK! For the past few weeks, he's been flirting with the high mark, and he completely dominated in the run game alongside Dontari Poe. Believe it or not, Tyson Jackson is the high mark on the chart, and most weeks, that 2.17 YPPT will be the lowest by quite a bit. Those are fantastic numbers, but before you get excited, I did leave one player off the list. Tamba Hali has a 13.67 YPPT mark in the run game. That's not good, but he was only run at 3 times, and once was for 37 yards because the edge wasn't set. I removed it so that everything was a little more visible on the chart. 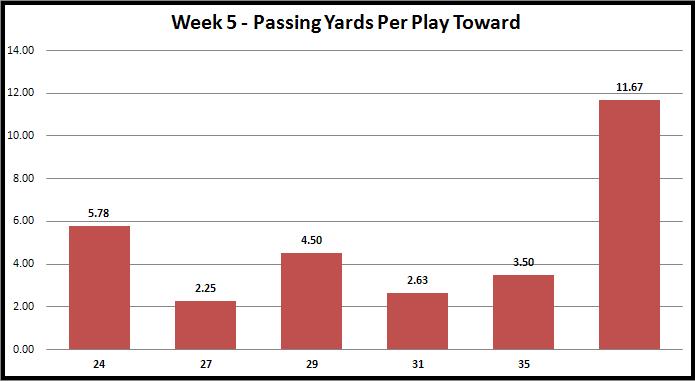 Wow. The two outside corners (Smith and Cooper) with less than 3 yards allowed per target. That's mind-boggling. DJ is the high mark in this statistic, but most of the damage was done in prevent coverage near the end of the game. I know Ryan Fitzpatrick isn't a world beater, but of the passes he threw to receivers with defined coverage (read: DB or LB within 5 yards, not blown coverages), he only averaged 4.44 yards per attempt. That's simply amazing defense.

Tamba was in the backfield all day long, lodging 9 quarterback pressures. He got plenty of help, though. Justin Houston clocked 5 pressures, Jordan and Bailey each had two pressures, and DJ, Poe, Tyson, and Toribio each had one.

DJ had two tackles for loss.

Sean Smith once again led all Chiefs with 3 pass break ups. Flowers had two PBU's. Berry, Cooper, and Bailey had one apiece.

There were things to pick on about this game for the Chiefs defense. They didn't close the deal on a bunch of sacks, had several penalties (Berry's PI was iffy, but most were warranted), and allowed a couple busted plays to go for big yardage. These are the types of things this Chiefs team has avoided thus far this season, and part of the reason they've looked so good. That being said, this Sunday's game was incredible even WITH the mistakes. The defense pressured well, and Tamba was relentless outside of one hiccup in the run game. Poe blew up 4-5 plays all on his own and continues to prove his improvements this season. The Titans never figured out that they should avoid Poe, because they went at him 10 times. DJ looked like the 2012 version of himself, with solid coverage (until the prevent D) and lightning quick gap shoots...and anyone clocking a negative yardage while seeing more than 5 snaps? Well, that's just ridiculous.

But the most impressive part of this Chiefs defense? The defensive backfield. Brandon Flowers moved to the nickel corner this week, and the team got better. Sean Smith has the makings of a shutdown corner, barely allowing anything through the air this year. And Marcus Cooper...just...what a surprise! My quote from last week: "Cooper was nice, but yeah, it's one game. You don't displace a guy with one game." Well, Bob Sutton clearly doesn't subscribe to my line of thinking, and that's a good thing. I know these stats aren't readily available (and don't really have that much relevance), but I'd be curious to see completions/yardage allowed in the first 15 targets of top CB's and how he compares. So if you're feeling saucy, Arrowhead Pride readers, hook those stats up.

The Chiefs are almost 1/3 of the way through the NFL season. The defense is playing lights out. The national media is paying attention. With 6 Pro Bowlers last year, is it possible that the Chiefs end up with MORE this year? I'd argue that they've got the best nose tackle in the league, the best strong safety in the league, and the best outside linebacker in the AFC. One thing is for certain, the quality doesn't drop nearly as much from those top flight players anymore, and the results on the field are showing...for your #1 ranked scoring defense Chiefs.