Once again, the Kansas City Chiefs defense showed why it's one of the best in the league on Sunday. Kalo gives the numbers, gushes about Akeem Jordan, is disappointed in Dunta Robinson, and wants to see more Marcus Cooper.

Another week, another fantastic performance by the NFL's #1 scoring defense. The Kansas City Chiefs took the field last Sunday against a New York Giants team that was...how do I put this lightly...historically awful. The offense was struggling to block and Eli Manning kept turning the ball over. There was no running game. And then...well...MANNING FACE! 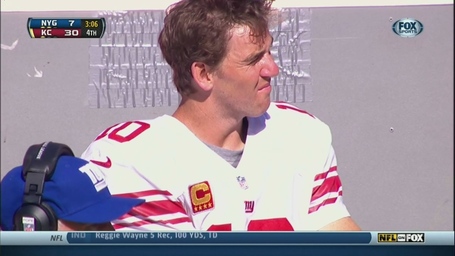 In all honesty, the Giants came out strong, putting up a fight early with some tough D, the ability to run the ball, and shutting down Justin Houston and Dontari Poe. The game plan was sound, but with the 2nd half came adjustments, and the Chiefs defense put the hammer down to keep the opposition under 10 points for the second time this year. Here's a couple reasons why the Chiefs played so well...and one guy that struggled.

Go ahead, ask me how wrong I was about Akeem. The simple answer is "completely". Week in and week out, Jordan has led the Chiefs defense in my Rushing YPPT tabulations, and every week I watch the tape, he's able to get into the gaps and make solid defensive plays. Let's check out a play from last Sunday that he blew up in the backfield with speed and correct angles. 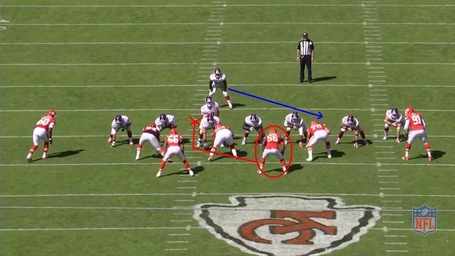 The Chiefs are in a the "base" 3-4 defense, and the Giants are lined up in a Singleback Ace Pair formation (1 RB, 2 TE's lined up on the same side). Jordan switches sides with DJ pre-snap to line up on the "strong" side of the offense. As you can see, the called gap scheme for the defense requires Jordan to shoot the weakside "A" gap, as demonstrated. The called offense play is toward the two TE's. Now for the blocking scheme: 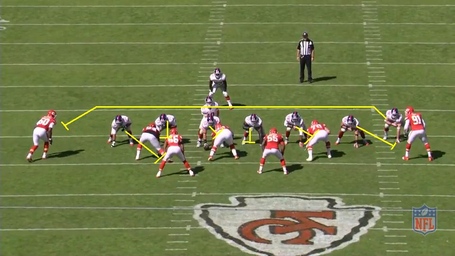 As you can see, one of the TEs is pulling to block the backside defender. The left guard is planning to block Jordan straight ahead, and the backside tackle is going to try to get to DJ before he can get to the gap. 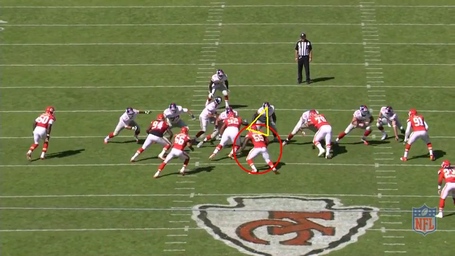 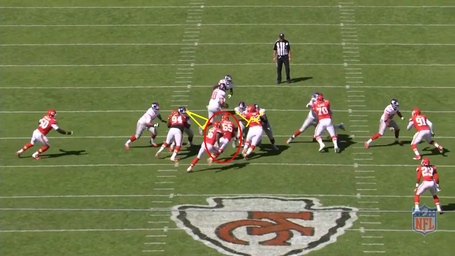 The guard collapses on Poe so that the center can make a switch to block Jordan. The tackle collapses on Tyson Jackson so the left guard can make a switch. However, Jordan has used his superior speed and is already in the gap at this point. Tyson and Poe do a great job of slowing up the two interior linemen just enough, too. 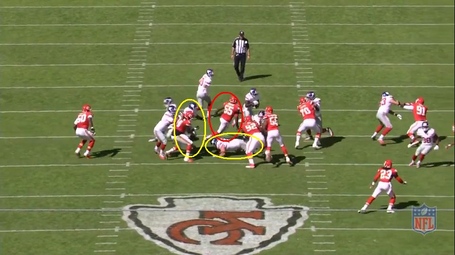 And viola, Jordan is through the gap, and in the backfield as the ball is being handed off by Eli. There's no way he's outrunning Akeem at this point, and it's a 2 yard loss. Great use of speed, shooting the backside A gap and getting to the running back before he has a chance to react. He makes plays like this routinely, and it's one of the reasons this defense is so stout in its front seven.

The Chiefs missed Brandon Flowers on the field last Sunday, and unfortunately it came at the expense of Dunta Robinson. Now, Robinson's not the biggest corner out there, and is primarily expected to play as the nickel corner...but his performance last week was pretty lacking. Let's show some examples. 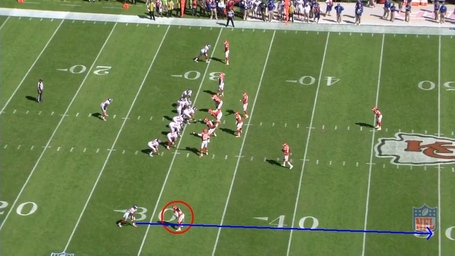 This is the Victor Cruz 69-yard TD play. As you can see, Robinson is up in press man coverage against Cruz. At this point in the game, he had been doing it regularly. The safety is creeping forward, not really offering help over the top, so Robinson needs to get his hands on Cruz and disrupt the route. 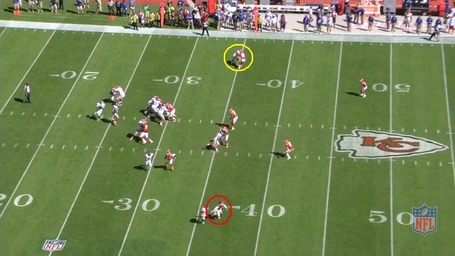 Robinson, however, does NOT get his hands on Cruz, and Victor blows right by him for an easy TD catch and run. Highlighted at the top of the screen is Sean Smith, slowing the other receiver's route. Yes, Tamba was held on this play, but if Robinson hits Cruz and throws off the timing of the throw, maybe Tamba gets to Eli anyway. 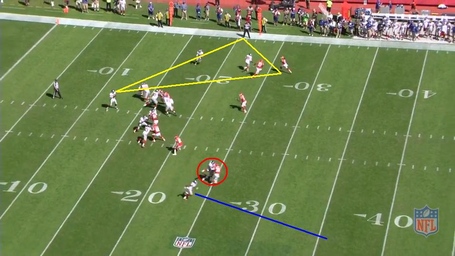 Another problem Robinson had this week was getting around congestion when he was defending the slot receiver. As you can see above, Robinson is trapped by the WR/CB pair on a simple slant route, while Cruz (who lined up in the slot) ran the go route. Luckily for the Chiefs, Eli wasn't looking in this direction, because Cruz was free and clear. This happened several times this week, and Eli tore Dunta up. He'll look to put up a better performance next week against the Titans.

Most impressive player of the week? That award goes to rookie CB Marcus Cooper out of Rutgers. Drafted in the 7th round by the 49ers, Cooper landed in KC without a whole lot of expectations. This week, he showed flashes of brilliance, shutting down Nicks and Randle on the outside. Let's take a look at a couple of plays. 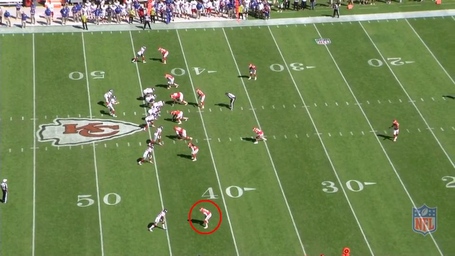 On this play, Cooper is lined up opposite Randle. He engages him off the line on an out route and continues with blanket coverage throughout. 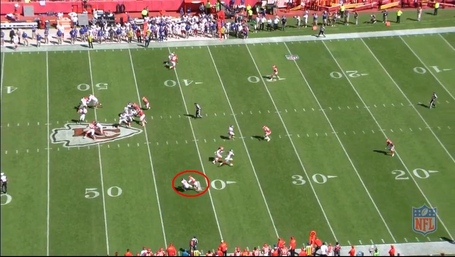 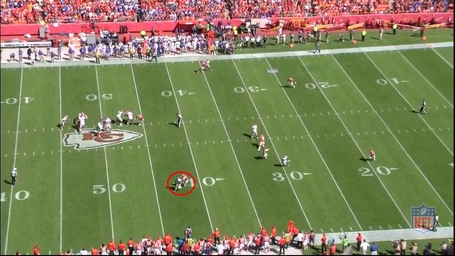 Eli doesn't even attempt the throw on this one. There's simply no room with Cooper pressing. The next play is Cooper guarding Nicks, again with press coverage. We pick up mid-play: 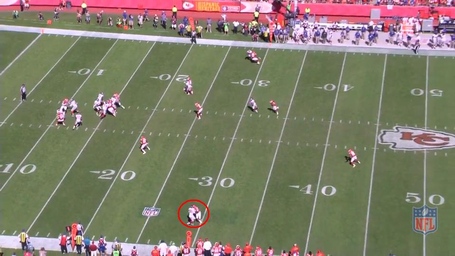 Nicks then shoves off BADLY on Cooper to create space for Eli to throw. 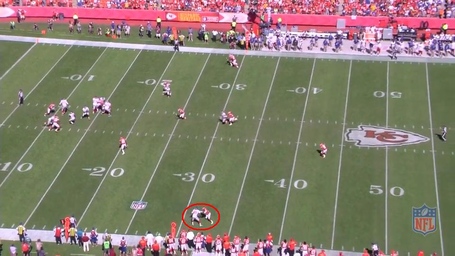 Eli sees the opening, but it doesn't matter, as Cooper recovers from the (uncalled) shove and dives in front of the pass, almost intercepting it. All around great coverage by the rookie, and look out...we may have a real player here. 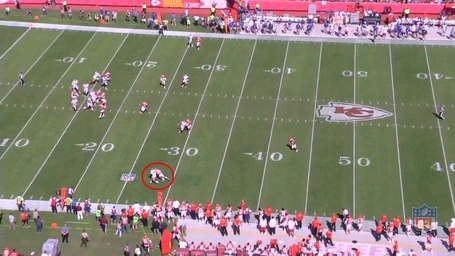 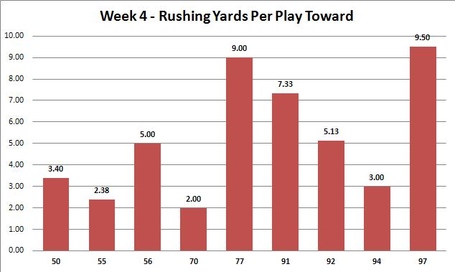 Well, the rushing numbers weren't great this week. Once again, teams spread out the defense and ran on the nickel package, as evidenced by DJ, Catapano, Hali, Poe, and Bailey's numbers. Bailey had the high number, but was only ran at twice for 19 yards. DJ was ran at the most this week (10 times) for 50 yards. Devito led all with 8 yards allowed in 4 runs, followed up by Jordan (19 yards, 8 runs). 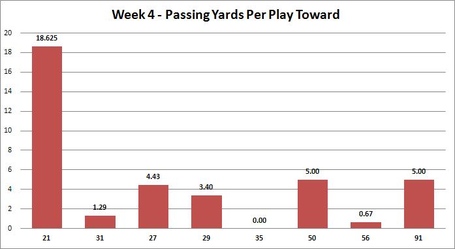 Yup, that's Dunta's number for the week. He allowed 149 yards passing in 8 targets. Sure, the 69 yard pitch and catch hurt, but even without it, he still allowed 11.45 yards per target. That's pretty darn bad. Demps and DJ have the lowest numbers, but were only targeted once (Demps) and three times (DJ). Good performances, but not nearly as good as Marcus Cooper: 7 targets, 9 total yards allowed. Those are incredible numbers for anybody, but a rookie thrown into a starting corner...on an island? That's outstanding.

This defense doesn't even let up when their No. 1 CB goes down injured. They just stick a rookie in against a solid receiver like Hakeem Nicks and a quarterback named Manning, and everything's fine. Hell, better than fine. Jordan continues to show why there's no question who's starting next to DJ in the base defense.

This defense doesn't even let up when their No. 1 CB goes down.

Tamba went nuts this week with the Giants trying to shut down Houston and Poe, and Eli never got comfortable because of it. Sean Smith is still steady on the outside, and DJ continues to play underrated football. Dunta will bounce back when he's not having to go up against a guy like Victor Cruz all day long. And hey, the guy who's had decent seasons that got him to elected to some arguable Pro Bowls is the best strong safety in the NFL right now, hands down.

There have been moments of stellar defensive play out of this Chiefs defense over the past couple of years. Right now, we've seen nothing but that in 2013, and it's winning games. I love this defense.