This is all so close to being officially official. I'll be updating this post with notes from what Reid has to say during the press conference.

You can watch Reid's presser live at the Chiefs website. You can also listen in at 610Sports.com.

This is where it's all going down (photo via @KrisKetz): 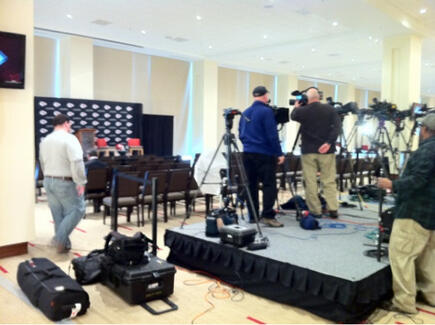 Clark Hunt is at the podium

Hunt laid out the criteria he put out there for the next head coach and said Reid hit on all of those criteria.

Andy Reid is at the podium

Reid said he loved his time in Philadelphia.

"When Clark Hunt called...I've been in this league as a long time, particularly as a head football cach. There are certain families that stand out and the Hunt family is just at the top. They're phenomenal people. When Clark, as the CEO and chairman of the Kansas City Chiefs, called it immediately had my attention. I completely understand his values, the family values and organizational values, which he possesses. The fan base here is phenomenal. I came from a fan base that was tremendous and the Chiefs fan base, there's nothing like the sea of red. I've had an opportunity to play here, and play against the Chiefs and it's tough." 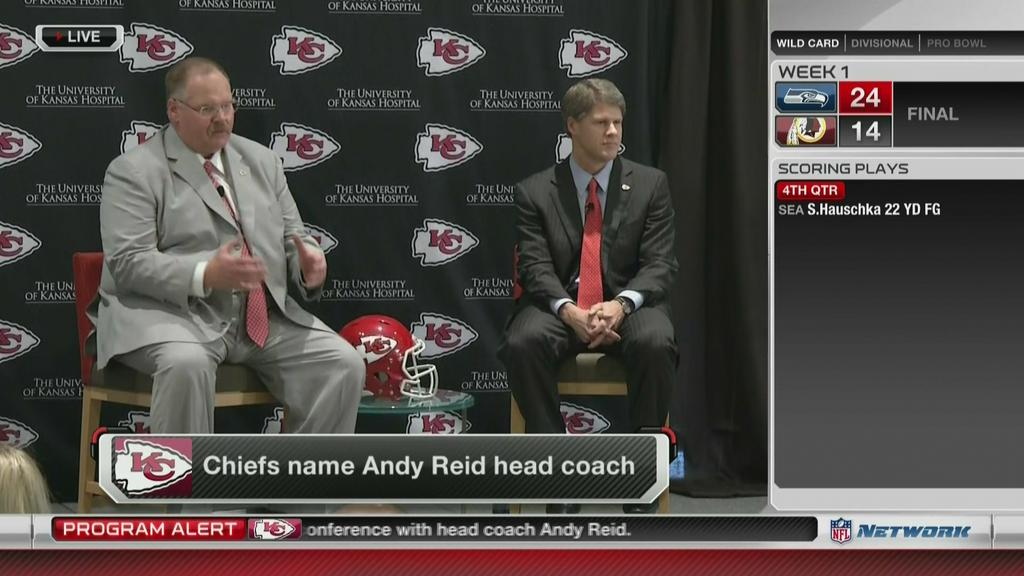 Reid: "It was what I thought might be a three-hour meeting ended up being a nine-hour meeting and it probably could've gone on a lot longer than that. There's a certain energy that started with Clark."

Reid: "As we talked, you got this feeling that this was right. This was the thing to do. It made this decision easy. I crossed my fingers I'd be offered the job and I was."

Reid: "I'll make sure I bring in a good staff and we'll get down to what's important with my title and job and that's to be the head football coach. That's what we're going to do. We're going to coach hard and make sure we build a foundation."

Reid: I've looked at the roster and there are some good football players on this team.

Reid: "The QB position, I'm going to dig in adn look at that. We'll build that thing. We'll see how that whole thing works out. I need to spend some time at it. I have to find that next Len Dawson doggone it. I need to find it. It might be right here, it might now."

Hunt: "We did have more interviews scheduled after coach Reid but made the decision we did not have to pursue those." Hunt said he felt pretty good by Wednesday night that this could happen."

Hunt on Pioli being in the Reid interview process: "It was appropriate to have him there at the time. He was still with the organization and I felt it was important to have him along."

Reid on the staff: "I've gone through and met all the coaches. I'll go through and make that evaluation as we go."

Reid on the next GM: "I'm leaving that up to Clark. I'll sit in on the interview with him but the final decision is his."

Reid on meeting with the current Chiefs coaches: "This morning I got in early and started the interview process. I started from the oldest down to the youngest. That's the way we went. They had an opportunity to have a platform to talk and I had an opportunity to talk to them. It was a positive interaction with all of us. We're all in the same profession together and they deserve that opportunity."

Reid on coaches coming with him: "There will be some that will come with. I'm still in that process. We'll see how that all works out."

Reid on Pioli's exit: "Scott and I are friends. We're very good friends. That was taken care of without me, between Clark and Scott."

Hunt: "I'll have a lot more interaction with the coach than I have had in the past."

Reid on the fans: "I want them to see the sea of red. I want them to see what I saw here when I came to play. That's a very energetic crowd, and I love that. My job is to get a good football team for them, a good product for them, and I'm going to work my tail off to make sure we can put that together."

Reid on Dick Vermeil: "He considers the Hunt family at the top of the list. He can't say enough good things about the Hunts, the city of Kansas City and the organization."

Reid on his draft philosophy: "You'd love to get good players." Says the responsibility for the draft will be on the GM.

Hunt on the 2012 season: "It was a very hard year on all of us -- my family, the fans, the organization -- both on and off the field. I don't want to say there's any one moment when I said I have to do something about it but clearly when you're not successful in the NFL it's clear change is coming."

Reid on the timetable for the new GM: "We've already started that process. We do have a list of candidates and we've begun the interview process and that will be continuing over the next several days. We don't have a timeline perse, but we want to get it wrapped up as quickly as we can."

Hunt said that signing Reid so early in the process gives them a head start on adding to his staff and hiring the GM.