Back to the 4-3? The future of the Chiefs defense under Andy Reid

The Chiefs have hired Andy Reid, who is a good offensive mind. So what about the defense? KaloPhoenix takes a look at how the Chiefs defense could look in the future.

Share All sharing options for: Back to the 4-3? The future of the Chiefs defense under Andy Reid

Since Wednesday evening's news about the nine hour meeting in Philadelphia and subsequent hiring of Andy Reid, the most asked question for me has been:

What are the Kansas City Chiefs going to do on defense?

The desire is for Andy Reid's new offense to hang points on the board quickly -- understandable -- but the defense is definitely a Jekyll and Hyde sort of beast.

We've all seen the flashes of brilliance in the 2011 win over Green Bay and the 2012 second half beatdown of New Orleans, but in truth, there have been plenty of the Week 17 38-point games against the Broncos out of this defense than the opposite.

More: The guide to Andy Reid

I still love the 3-4 defense, and I think the system the Chiefs run could be successful with a couple tweaks, and I have stated my desire for a Ron Rivera led defense (should he get fired in Carolina).

But, on the Chiefs future defense, NFL.com's Daniel Jeremiah tweets that he "won't be shocked if Monte Kiffin lands in KC as DC." And others have heard the same.

It could be something, it could be nothing more than a rumor. But I've seen some vitriol about the possibility of that hire. Ask yourself, "Would I be okay with Monte Kiffin in Kansas City?"

Most don't like it because of these two words: Tampa 2

It's a term that makes most Chiefs fans skin crawl. Yes, the same style that Herm Edwards played during the catastrophe of the 2008 season. Yes, the same defense that is supposedly "going the way of the West Coast offense" (which, ironically, Andy Reid may run in KC). There were two defenses running the Tampa 2 as their primary defense this year: Chicago and Minnesota. The fundamentals of the defense are predicated on speed and tackling ability, as well as a zone shell requiring all of the linebackers to have quality coverage ability.

Oh yeah, and the way Monte runs it, it's a 4-3 Under Front. The very same front that I condoned in a post nearly 4 years ago. 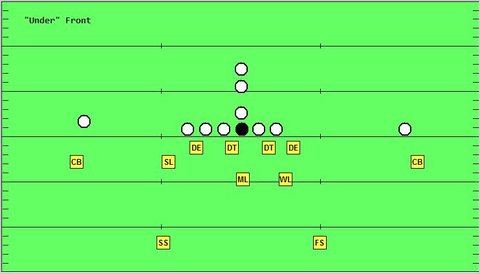 That article pairs players with specific responsibilities per descriptions given by Pete Carroll. The first thing you may note (other than the alarming amount of Tamba-hate in the post and in the comments) is that the Chiefs never ran this defense, thereby making any correlation as to where players could fit a moot point.

Now that it's coming up again, and after four years of experience in the 3-4 defense, I'd like to address those positions again.

Sharp-eyed readers (or those who already know how a 4-3 under works) will see that where the defensive linemen are positioned: 1-tech nose tackle, a 3-tech defensive tackle, a 5-tech strongside defensive end, and a pass-rushing defensive end.

Currently, the Chiefs are sporting a young nose tackle in Dontari Poe, a decent 5-technique in Tyson Jackson, and a two-time Pro Bowl pass-rusher in Tamba Hali. The 3-technique position would fit Glenn Dorsey's strengths coming out of college should he re-sign with Kansas City, but many will agree that another defensive lineman is needed going into the next year. 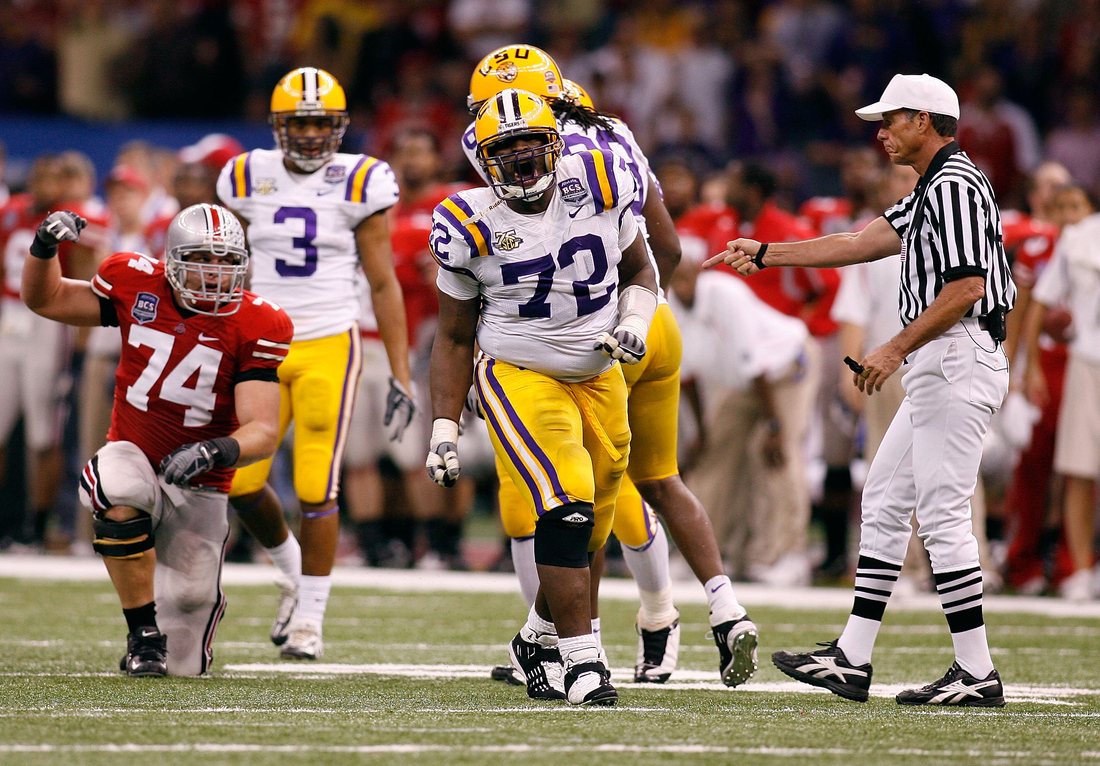 So, the personnel required to run a 4-3 Under front isn't lacking any more than that required to continue running the 3-4 defense the Chiefs have been running already. On top of that, Kiffin's methods would also get this defense to something most around here have been clamoring for: a 1-gapping system. If you're not sure what that is, go read Texas Chief's comments on 1-gapping. He does a great job explaining it.

Now, for the secondary: 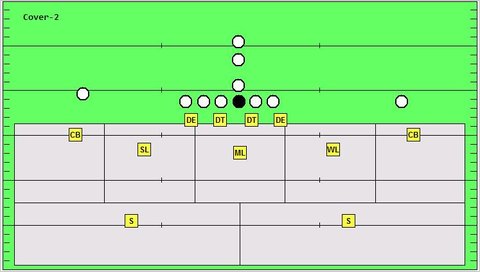 This is what a typical Cover 2 scheme looks like in the NFL. It's sectioned into five pieces in the first 10-15 yards, then asks the deep safeties to cover the deep parts of the field, from midfield to sideline. Tony Dungy and Monte Kiffin said to hell with that and changed it up slightly to cover the deep middle a bit better and look like this: 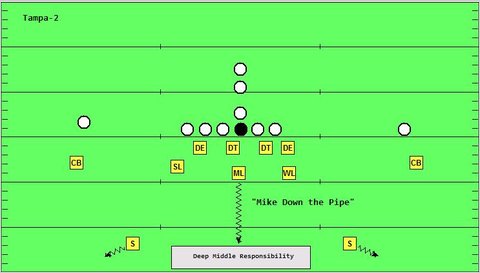 This scheme allows for more coverage of the soft spots in a typical Cover 2, making the safeties have to cover less space, and allowing them to collapse on routes quicker without worrying about getting beaten by a pump fake or misdirection. Every team has a version of the Cover 2 in their arsenal. The Chiefs have ran it for years. However, the 2002 Super Bowl Winning Bucs put a smaller linebacker, Shelton Quarles (6'1, 225 pounds ) at that MLB position and had him cover more area on the field. The Chiefs currently do some of these same principles with Eric Berry in the nickel defense, but in more of a man coverage scheme than a zone like the Tampa 2 suggests.

Another guy who used Eric Berry this way? Monte Kiffin in 2009 at Tennesee. 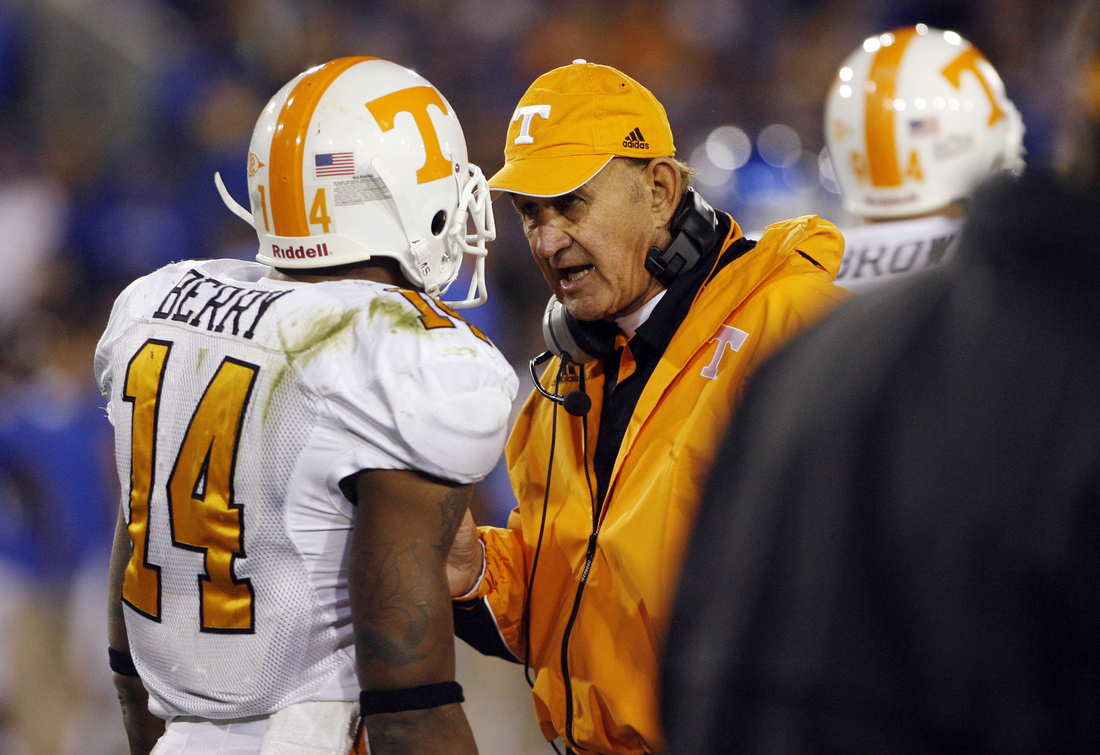 He made Eric Berry the guy that commanded a top five pick at the time by playing him in this defense and letting him roam. Oh yeah, and that Brandon Flowers guy? He was drafted because of his translation into Herm's Tampa 2, so he's familiar with the defense as well.

So, what does the secondary lack in this situation? A cornerback is needed one way or another, and this team could do with one or two new safeties since they tend to blow through them with injuries...but those are problems whether or not the Tampa 2 is implemented.

Combining that with the front seven, the Chiefs needs are CB, DT, S, LB/S, which are exactly the holes that the defense currently has.

Still, people are afraid of the defense. Its popularity in the league has waned since the 2002 Bucs put possibly the greatest defense of the decade on the field. When run well, the defense is hard to break down, and results in short passes and stymied runs. When it's run badly, however, linebackers can end up on slot receivers, and holes can pop up all over the secondary. Most that ran it moved away from it because of the high premium it puts on the pass rushing DE, the 3-technique DT, the WLB, and the primary CB. The Chiefs have at least three of those on the squad right now, and it's anybody's guess if Dorsey could gain a resurgence as a 1-gap, 3-tech. By the way, it was this very same defense that created Warren Sapp's legend.

Above I said that I thought the 3-4 system ran here in Kansas City could work with a few tweaks. I think there are some of the interior linemen on this team that could benefit from a 1-gap style of defense. I think Eric Berry should be allowed to roam in the middle to deep-middle of the field and make breaks on the ball, but not get too far away from the line in run support. I think the way DJ, Tamba, and Houston are being implemented currently is successful, and I wouldn't change that. Finally, I've been beating the drum that the defense should utilize the same personnel as much as possible to disguise coverages, blitzes, and not allow the opposition to force the defense into certain personnel packages. All of the above are hallmarks of Monte Kiffin's Tampa 2, and they play to the strengths of the defense's best players.

So then, ask yourself again: "Would I be okay with Monte Kiffin in Kansas City?"