The downfall of a GM: 4 years of Scott Pioli approval ratings

Clark Hunt fired GM Scott Pioli on Friday, almost four years to the day after he hired him. Arrowhead Pride's monthly approval ratings over the last four years help tell the tale of the downfall of Scott Pioli as the GM of the Chiefs.

Share All sharing options for: The downfall of a GM: 4 years of Scott Pioli approval ratings

I knew these monthly approval ratings would come in handy one day.

What you see below is a graph of our monthly approval ratings for the now former GM of the Kansas City Chiefs, Scott Pioli.

We ran an approval poll in Pioli's first month on the job through the last month. This graph is the result and ... well, it kinda tells the whole story, doesn't it?

(Click to view it larger ... credit goes to Clay Wendler for creating the graph) 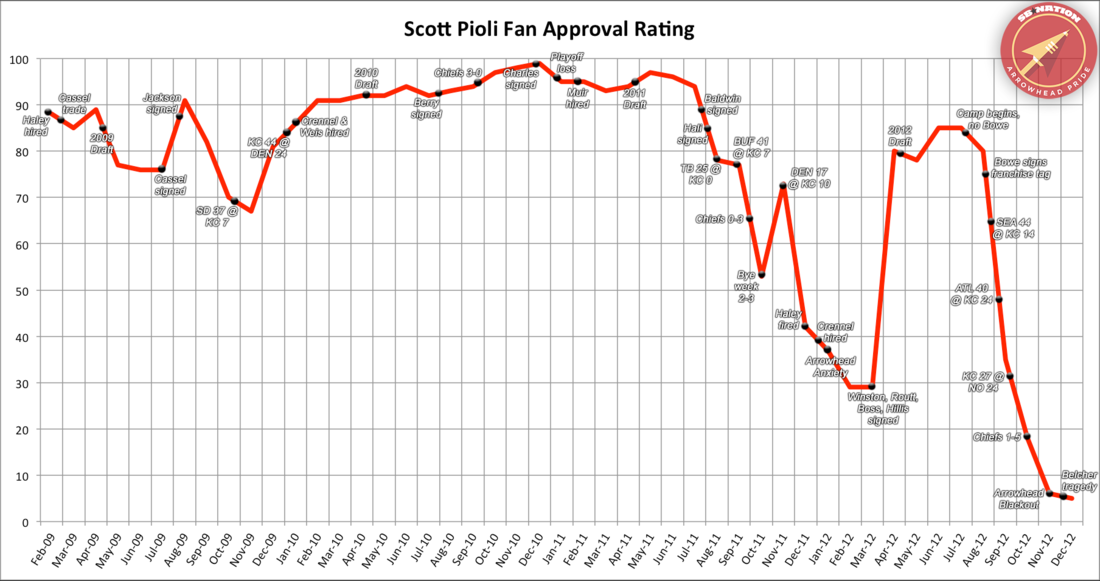 Several things jump out at me.

Even during that miserable 4-12 2009 season, his numbers were staying (mostly) above 70 percent. The 2010 season was a playoff season, the draft picks looked good ... the numbers were through the roof.

NINE voters did not approve. Not percent. Voters.

Then again, that's about the time Jamaal Charles signed his extension. So, not all bad.

2. Expectations caught up to him

Coming off the 2010 season, we all thought the Chiefs were going to be good in 2011. Nope. They weren't. Even then, heading into the 2012 season, plenty of people had the Chiefs and Broncos battling it out for the AFC West title. Nah. How about two wins instead?

The fan reaction is one thing when everyone expects you to be bad. But when you put high expectations into the fold ... you better be good.

3. The last three months of the Pioli era truly were the worst. It was time.

What stands out to you?