We get the true thoughts of quarterbacks around the league from former Kansas City Chiefs GM Scott Pioli, who joined the Dan Patrick Show this week. Read what Pioli said about Alex Smith's future, Joe Flacco's next contract, Tim Tebow on draft day and, yes, even JaMarcus Russell.

The rumor has it that Alex Smith will request his release from the San Francisco 49ers after the season, making him available to the 31 other NFL teams. The 49ers will try to trade him but since most teams know he won't be a 49er next year either way, the trade market probably won't be hopping.

So, however it comes, Alex Smith is expected to be available, and people are wondering where he'll land.

Who are interested in Alex Smith? Teams you would think -- Bills, Cardinals, maybe Eagles. Not the Jets, though. At least not yet.

Chiefs figure to be in mix of teams interested in Alex Smith (along w Bills, Cards, maybe Eagles). Interest will be real for a 1-year rental

That looks like just reading the leaves. The Chiefs need a quarterback so of course they have some level of interest.

Absolutely. Smith handled himself well in San Francisco despite all the drama surrounding the team. He played well last year and the half season he played this year.

Don't let Alex Smith stop you from picking a quarterback in the first or second round. I'm all about hitting the free agent market and picking up a quarterback this offseason so long as it has no affect on the Chiefs draft day decisions. I want a quarterback drafted no matter who is signed in free agency.

Speaking of Smith, a familiar face weighed in on his future this week -- Scott Pioli, who talked with the Dan Patrick Show.

"I think it's a player that people will be interested in and they should be interested in," Pioli said. "What Alex was able to show is that once he got stability in an organization and people that trusted and worked with him, he improved. He became a good player. And a lot of that was due to coach [Jim] Harbaugh. He did a tremendous job with him. I think he's a player people know now can be a good player. He should have value out there. He really should. There are a lot of teams that are looking for quarterbacks." 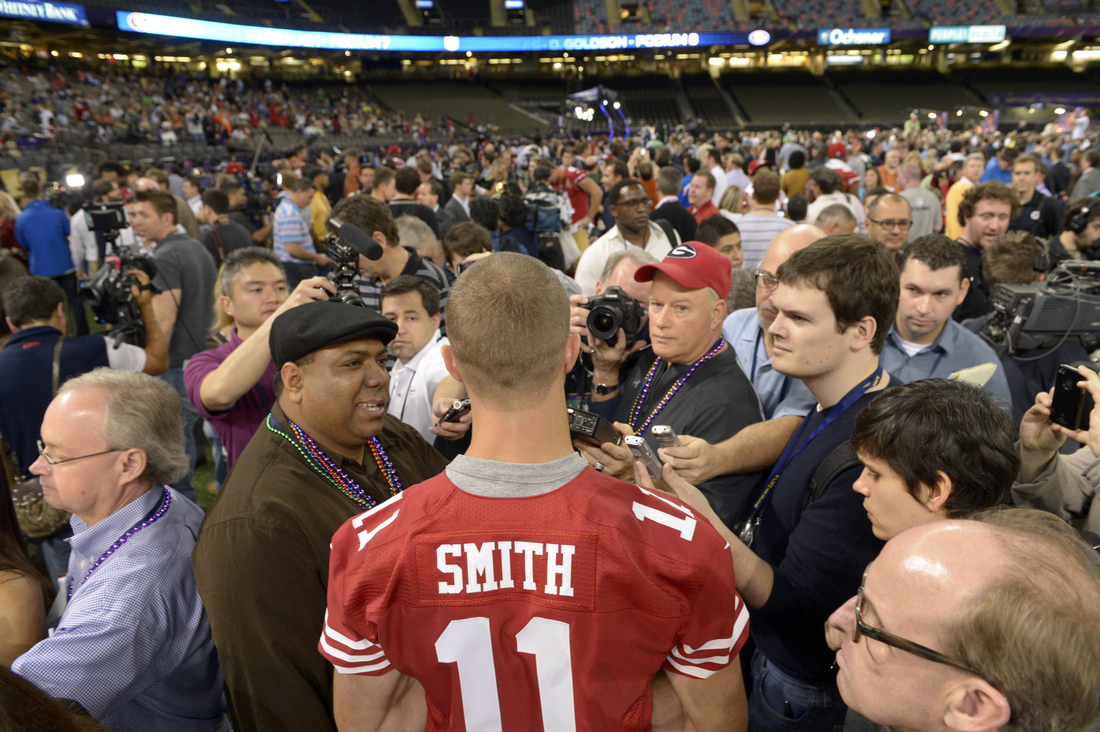 Pioli covered several other quarterbacks in his time on the Dan Patrick Show...

JaMarcus Russell to the Jets?

Pioli wondered how that rumor even started.

Patrick: "He's been thinking about a comeback, he's watching TV."

"I just think he needs more years," Pioli said. "That's me personally. Hey, I've been accused of being a guy who doesn't like to pay players too much money. The other guys (Peyton Manning, Tom Brady) had longer standing bodies of work."

Interesting. We can always twist words around so take this for what it's worth but Peyton Manning had less "pelts" than Joe Flacco in March 2004 when he received his first contract extension, a $99 million deal. He had just two career postseason wins at that point. If postseason wins are pelts, Flacco easily tops Manning.

Would the Pats have drafted Tebow?

Before the 2010 draft it was believed that Bill Belichick had an interest in Tim Tebow. How much? We don't know. But enough to the point where when Josh McDaniels, then with the Broncos, moved up to get Tebow, and then ome folks wondered if McDaniels did so just because Belichick and the Patriots supposedly wanted him.

Pioli didn't know whether Belichick was really prepared to draft Tebow or not -- he was with the Chiefs by that point -- but he did admit that the media can be a tool in draft season.

"Unless you're in that room you never know," Pioli said. "Working with Bill for 16 years, sometimes that was a little game that was played."