Checking in from Mobile with notes from the South team's walkthrough at the Senior Bowl practices. Read all of our Senior Bowl reports here.

Share All sharing options for: Senior Bowl 2013: Practice updates for a walkthrough

One thing that was obvious walking into the stadium is the majority of scouts and NFL personnel guys take off when Wednesday's practice is over. The players are in shorts and the majority of work is already done for those guys.

Once practice started I again found myself heading towards the defensive lineman working with Lions' defensive line coach Kris Kocurek. It's the one set of positional groups that you can get really close to when they're going through drills. These drills occur in the end-zone and you can hear everything that's being said. That's always an, uh, interesting thing with coach Kocurek.

When the players were going through agility drills again it was LSU's Lavar Edwards that really stood out. He's a developmental 5-tech DE from talking with guys around here but at 6'3 270 pounds he's athletic enough to be able to slide inside in passing situations.

John Jenkins was very hot and cold just going through the drills, but he was far from the only one. A defensive lineman that hasn't helped himself this week is South Florida's Cory Grissom. He was called highlighted several times for not going hard or not doing the drill correctly. Grissom even told Cody Bauer of NFL's Future that he wasn't working out leading up to the Senior Bowl practices. His last game was on December 1st and that seems like along time to go without working out consistently, especially considering how important this week is to all of the players.

Another defensive lineman that I really like and have mentioned before is Tennessee-Martin's Montori Hughes. He said he's played in both 30 and 40-front's in college and isn't particular on what scheme he plays in the NFL. He has a little bit of Shaun Smith in him in how he talks and carries himself. He's not afraid to talk and brings that attitude you want in a defensive lineman.

"Every time I'm on the field I just love to have fun and to compete," Hughes said. "Every day you gotta push yourself and there's a lot of talent out here. You got guys from big schools and me being from a smaller school I feel like I've got something to prove."

Hughes went on to talk about what he's learned out here.

"You've gotta bring it every play. There's no taking plays off and somebody's out to get what you want," said Hughes. "I am just blessed to be here. I got called late. I knew there was going to be a lot of talent out here and that I was going to have to bring my "A" game."

I asked him about how he liked working with such an animated position coach during the week.

"I love him. High intensity. That fits me perfectly because I'm a high intensity guy. Being out there yelling, running around and competing and working hard is what it's all about on the D-Line. If I'm playing quiet I don't think I'm playing my game"

I'm telling you guys that if this guy ends up a Kansas City Chief he'll be a fan favorite pretty quickly.

Tyler Wilson did not have a good day for whatever that's worth. The first pass I saw from him was a simple out to a TE that was jumped by Alabama's Nico Johnson and taken for what would have been a pick six. Wilson's next pass to the corner of the end-zone could only be described as a 'duck' and was batted down by the cornerback. Oklahoma's Landry Jones looked good in this drill from what I saw as well as Florida State's EJ Manuel, who was probably the best, in shorts, in this one red-zone drill. Don't overreact. 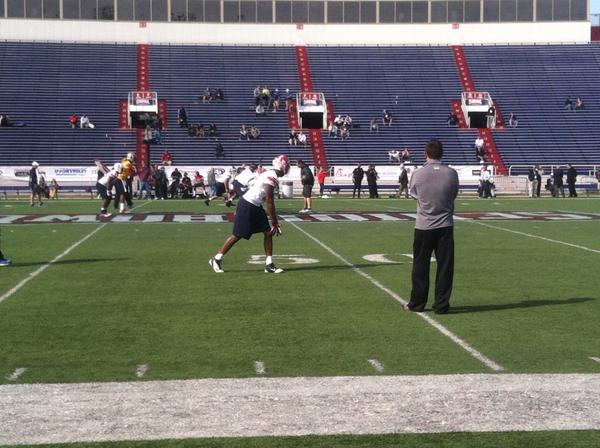 It seems that quarterbacks are always a touchy subject around here and the entire week has to be taken with a grain of salt both good or bad. This week isn't making or breaking anyone's draft stock. It might raise questions and create interest to go back and watch more tape on a particular player.

During the red-zone drills that defensively Nico Johnson was relaying the defensive calls so I assume he'll do that on Saturday.

I'm pretty proud of my picture of Cobi Hamilton going up and making a play on 4th down in the end-zone on a pass from Tyler Wilson. Can't decide what was more impressive between his catch or my IPhone camera-work.

You be the judge: 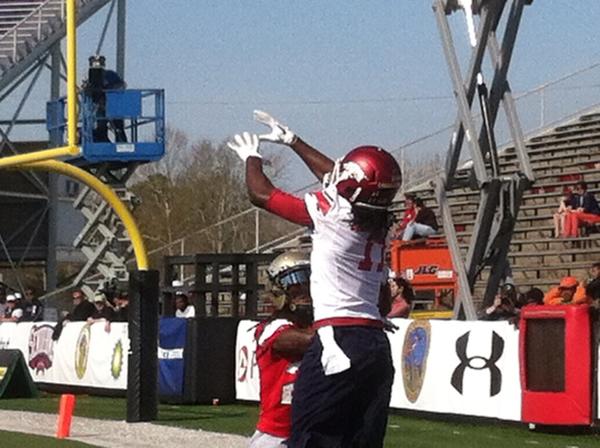 The last part of the practice the offense worked on the two-minute drill with Lions head coach Jim Schwartz looking on and making the calls.

As I was leaving the park I got a chance to talk with a couple of Kansas City Chiefs fans that drove down from Missouri to check out the first few days of Senior Bowl practices. I'll have a post on them a little later but as I was talking with them NFL Network's Pat Kirwan came by and we all chatted for a while. Apparently these Chiefs fans come every year and quite a few of the analysts have gotten to know them pretty well. They'll even stop by and get out the white board and go over plays and schemes with this group of guys. (Two Chiefs fans but a big group.)

A few minutes later Seattle Seahawks quarterback's coach Carl Smith came up to us, talking about Russell Wilson. Didn't share anything earth-shattering but did say that even back when Wilson was playing baseball in the minors he was always the last guy to leave and the first to arrive. His baseball coaches first thought he was a kiss ass by staying all that time after practice to work on things but eventually learned and concluded, "That's just Russell".

Kirwan didn't name anyone specifically when I asked who impressed him but he said he liked the South teams' linebackers and quarterbacks better than the North team. Seemed to be impressed with Wilson after admitting he even had a bad day on Thursday.

The North team was holding their walk through at the same time today so I don't have any notes from over there but from those that I talked to said Datone Jones has continued to have a big week and Mike Glennon is continuing to throw the ball well down the field. Nothing shocking.